All these years wasted! A lifetime, really. Day after day, week after week, month after month rolling around with neither goal nor focus. Eyes dawdling in every direction but down! Into electrical wires, on the backsides of buildings, caught in treetops, telephone poles, and up in the clouds. Regrets: yeah, we’ve had a few.

Sure: we’d seen sidewalk/mason stamps before, but they never really occupied prime territory in this blogger’s dog-eared and ill-folded mental map. Maybe it was just plain not paying attention or the willful ignorance of avoiding their alluring street-level stare. Either way, the city’s concrete masons never made that great of an impression on us [har har]. That was, however, until Orbit reader Larry Kramer came into our life with his post-Easter walk-through on the year-round egg hunt that is stamp collecting.

Larry’s piece was a great beginner’s guide to the greatest hits–plus a few deep cuts/one-hit-wonders–of Pittsburgh sidewalk-laying history. Di Bucci, Pucciarelli, Baleno, Ciriello–these are the Beatles, Stones, Michael Jackson, and Prince (respectively) of local cement work. You’ll come to recognize their tell-tale signature shapes from any distance–across the street or cruising by in a two-wheel, slow-motion neighborhood drag.

A little tip: don’t get too excited when you bag your first diamond-shaped Santo–it’s about as hard to find as Best of Bread or Whipped Cream and Other Delights at any thrift shop–and worth the same fifty cents. In just a few short months, we’ve developed a whole new outlook on life and a more discerning palate in this most al fresco of dining experiences.

Didiano, Lucente, Colucci, Palmieri, Ciummo, Pollice. It’s a stereotype, for sure, but the names–which read like a passenger manifest on a one-way liner from Naples to Ellis Island–don’t lie. Italian-Americans poured a lot of concrete in Pittsburgh over the last century and still seem to dominate the business today. After you bag all the big-name repeat offenders, it’s these other smaller-scale, long-gone operators who may only have a handful of remaining stamps that keep the hunt alive and exciting.

There seems to be very little documentation on the computer Internet of this particular underfoot history–and most of that comes from some pretty rinky-dink sources. From what we can tell, though, the legacy of sidewalk stamps has some unique cultural differences based on what part of the country was having their pedestrian paths prepped. 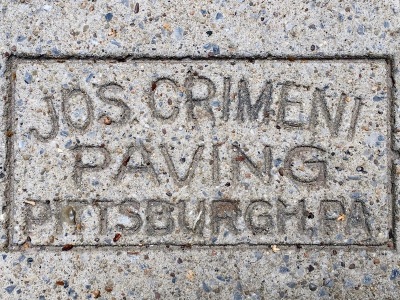 Here in Pittsburgh, the obvious thematic threads between our stamps are that they include the surnames of (mostly Italian) individual contractors, (seven-digit) phone numbers, and (often) extra business info squeezed in, ex: Cement Contr., Gen. Con., Landscaping & Construction. Our stamps are never dated. (Sigh–that would be so interesting!)

Other cities like Vancouver and Milwaukee have made dating the concrete pour the primary stamp. In Corvallis, Oregon the system was to include street name, contractor, and year of installation, but with a standard form and typeface (if it can be called that) containing no individual flourish. In the latter case, every (known) stamp in town seems to have been impressively mapped and labeled. There are other blog entries documenting small collections from Los Angeles, Oakland/Berkeley, Denver, and Chicago–but there’s just not that much interest out there. 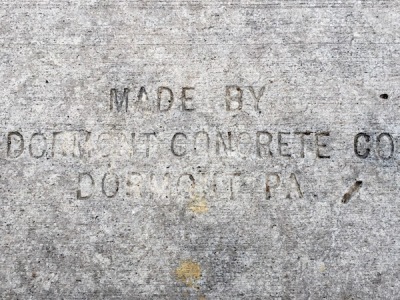 The new school. Depressingly sterile in their oblong, bloated rectangle shape and factory-set letters, it’s still great to see today’s masons leave their mark–and phone number–in their work…the stamps are just not as attractive or interesting. 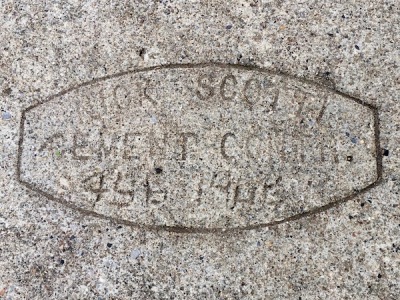 Finally…these are pretty neat, but there must be more of the really cool metal plaques that Larry mentioned, right? You bet your big brass there are! We’re working on a follow-up that will include the really old-school inset pieces along with some of the other oddball stamps and things we’ve found. That’ll be up….sometime.

Got a tip on an unrecognized stamp? A suggestion of an impression? We’d love to hear about it.