All things may be yours…but you can’t always take them home with you. Painting/wheatpaste by John Lee (aka “Clohn Art”), Munhall, 2016

January 1, 2016. This blogger has no particular memory of what was going on that New Year’s Day nearly four years ago, but the photographic record doesn’t lie. We shot a series of ghost pizzerias and No Parking signs at scenic locales from Homestead down, around, and over the river to Glassport.

The most intriguing find of the day, however, came calling out from the inside of a rusty metal shed along East 8th Avenue in Munhall. Completely open to the street, the little three-walled steel shack appears to be either an artifact of the area’s industrial past or a larger-than-average bus shelter–perhaps both. Either way, its open-to-the-public opportunity and hidden-from-the-cops privacy make the little lean-to an easy target for graffiti. 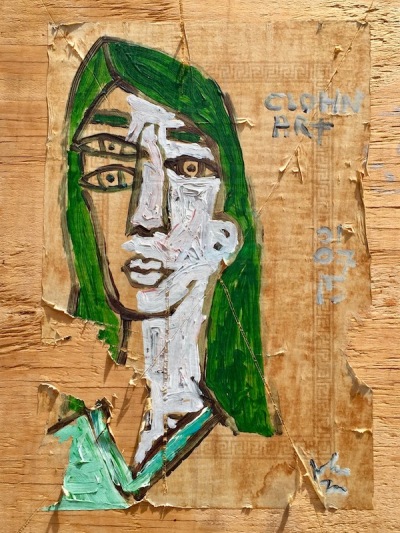 This piece was different, though. No mere copycat tag or delinquent’s de rigueur spray-painted wang, what caught the eye was a legit original artwork. The painted was rendered in bright acrylic color on thick brown packaging paper and applied directly to an interior wall of the shelter.

The subjects are three cartoonish human-like figures, their facial features randomly shuffled out of order. Eyes are stacked one on top of the other under a single brow; elongated oversize noses are lifted and askew; pursed graphic lips are highlighted like an offset print job.

The metal enclosure even makes its way into the artwork. Random rust spots permeate the unpainted surfaces of the wheatpasted paper media giving the three faces pockmarked or freckled blotches across their skin and through the bare sections of background. Each person has a word bubble with the same arch message: all things are yours. (See photo, top.)

The Munhall painting wasn’t the first piece we’d come across attributed to the cryptic Clohn Art–there had been a couple earlier finds along Penn Avenue (see photos, below)–but it was the one that put all the pieces together and it still remains a favorite.

After that, the floodgates seemed to open just briefly as we spotted more Clohn Art all over: a series of animal paintings on Chinese restaurant placements in an alley downtown; a three-eyed, green-haired woman fused to plywood; stray blue period paintings on the back of a Shadyside garage. And then … it all stopped. 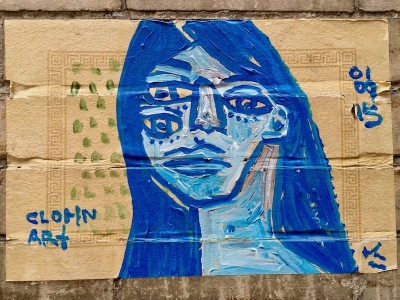 John Lee (aka Clohn Art) (it’s pronounced clone; not the way Pittsburghers say clown) is a hard guy to get on the horn–and it wasn’t for lack of trying! Three full years after initially getting shot down, in comes the most welcome–if apropos of nothing–comment on an otherwise unremarkable Orbit Instagram post. The artist is ready to come in from the cold and he’s just decorated Second Avenue in Hazelwood with a new batch of paintings. 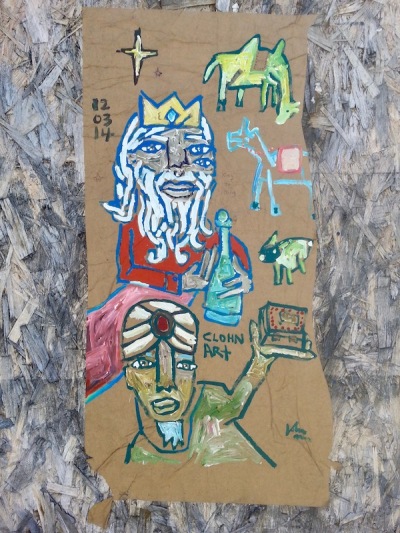 “There’s a quote, ‘Writers write,’*” John Lee tells me, “so I figured that painters paint. I should be painting.”

And paint he does, usually six days a week at his Lincoln Place home studio, churning out artwork on a variety of recycled media: packing paper, placemats, plywood, and flattened cardboard boxes. There are so many paintings that they need to go somewhere, and that includes the tasteful redecoration of underused buildings–here in Pittsburgh and wherever Lee travels.

“With cardboard art you always have an outlet,” Lee says, “It’s the most respectful form of street art–you’re not really damaging anything.” Lee prefers to staple his cardboard paintings to the plywood covering windows and doors of abandoned/unoccupied buildings, though he’s also used wheatpaste to effectively glue paper artworks directly to wall surfaces. The results will still wash or peel away eventually, but they last a little longer. 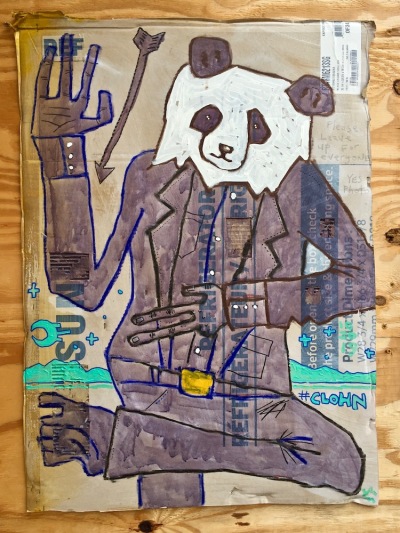 John Lee’s art has a couple common subjects: people–often with their facial features irregularly rearranged–and animals. You’ll also find a blending of the two as the series in Hazelwood included: a panda’s head on human body wearing a brown suit; a cat-man in pajamas; a person in western wear with a bird’s head costume. “You don’t know,” Lee says of the ambiguity in man-beast representation, “They could be anything.”

Other oft-repeated motifs include a sort of jointless free-floating position in the slender bodies–arms and legs extended, folding, and curved backwards in a kind of weightless space yoga–and stiff, awkward hands as if the characters are just forming their first words in sign language or attempting to flash caricatures of gang symbols.

In several instances, John Lee has set up what he calls the Honor System Art Gallery. Beyond just street art, the typically-smaller, often framed artworks are bundled together at a common location with instructions to Take one art work now and then pay (what you like). Details on purchasing via various app-based electronic payment systems is included. 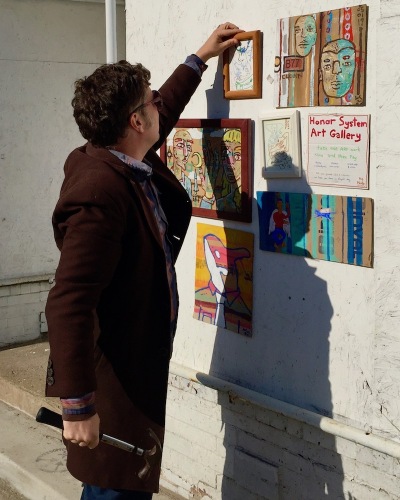 … and, because we didn’t have a “real” gallery show or other public event to hang this story on, John Lee suggested he set up a new Honor System Art Gallery just for the occasion.

That went up two days ago on the rough plywood of a condemned building on Penn Avenue in Garfield and I’m here to tell you it looks great. It’ll be a heartbreaker to see those little paintings disappear–however that happens–because they are such an obvious civic improvement to the old boarded-up Heavenly Cuts storefront. But … John Lee would also love for you to have a piece of his artwork displayed somewhere in your life. 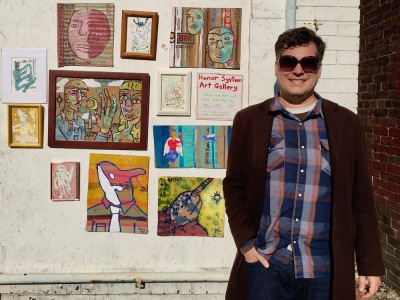 An earlier “gallery” Lee set up on a chain link fence in Seattle currently holds the record for the best response/most (financially) appreciated artwork. So, c’mon Pittsburgh! We can’t let those latté-sniffing West Coast jagoffs hold a title over our (adopted–John Lee is originally from Albuquerque) home town guy! Get your keister to Garfield and buy a piece of street art!

* Best as we can tell, the quote is by Ralph Keyes and goes, “Serious writers write, inspired or not. Over time they discover that routine is a better friend than inspiration.”

2 thoughts on “Send in the Clohns: John Lee, The Cardboard Caravaggio”