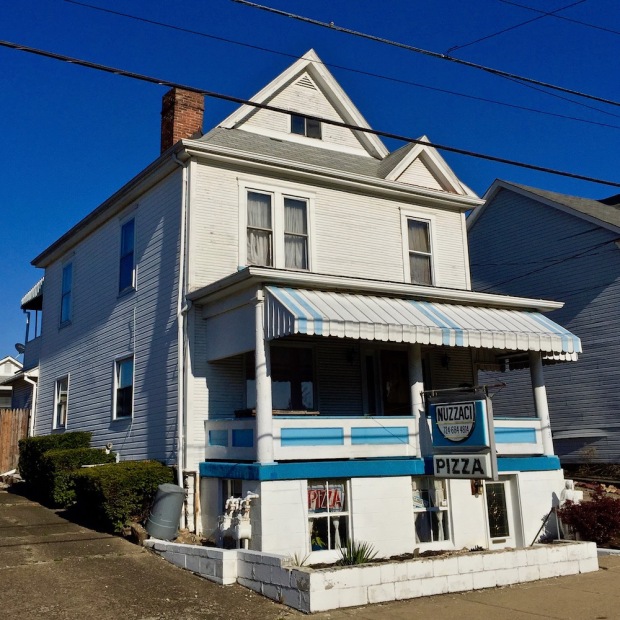 It is entirely fitting that one must ascend a steep hillside to get here because this pizza comes not of the earth, but from the heavens.

Pardon me if we exercise a little culinary melodrama, but this deserves it. Biting into a fresh slice is to be transported, 30,000 feet straight up into the sky, where one glides on—and dines of—pure ether. How can this most common of meals manage the paradox of being both hearty and weightless, brutally crude and expertly crafted, simple and transformative? Yeah, it’s a lot to consider, but … we’re getting ahead of ourselves.

The word sponge doesn’t cannote great faith in the food it describes. Sure, sponge cake has its proponents and there’s injera, the sourdough-risen flatbread, often described as “spongy,” that you’ll find in Ethiopian cuisine. Maybe we can count marshmallows as little gooey sponges—but that’s really about it.

That the product of Nuzzaci Pizza Shoppe is most frequently described as “sponge pizza” may be understandable, but it’s unimaginative and does a disservice to this extraordinary, pillowy, thick, cake-like pizza.

No, the experience of eating Nuzzaci’s, fresh from the oven, lifted, airy, and—sorry: it’s the only word for it—moist, is like biting into a cloud…with melted cheese on top. It’s as if the very atmosphere has morphed into warm dough, crowned with a thin halo of red sauce. It is absolutely divine.

J.T. Sassak is the third generation to operate the tiny pizzeria from its only ever location in the basement of the family’s large, wood frame house on Knox Avenue in Monessen. In 2010, the Trib did a pretty complete rundown on the Nuzzaci-Sassak family lineage, going back to J.T.’s grandmother Cosamina Nuzzaci opening the shop in 1952, so we’ll not repeat all that here.

We will mention, though, that Sassak mixes all his dough by hand and J.T. has the Popeye-style forearm muscles to prove it. There was just no way to get a commercial dough-mixer down the little basement stairs and around the various corner-turns necessary to make automated dough kneading happen. So the pizza crust is still prepared exactly as is was by Cosamina, according to her hand-written in Italian recipe on a brown paper bag. 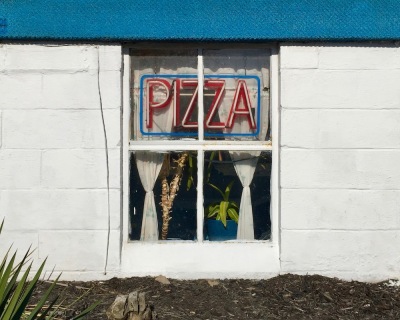 You hear the phrase if it ain’t broke, don’t fix it plenty, but Nuzzaci’s makes the old cliché a mission statement. This is pizza simple: there is only one product that may be purchased at the restaurant, either by the slice or as a 15-cut “tray.” There are exactly seven options for toppings—inserted under the mozzarella—plus “double cheese.” There are no drinks, sides, bread sticks, chicken wings, salads, or dessert. All purchases are made in cash. Nuzzaci Pizza Shoppe has no dining room.

A full tray of pizza with one (split) topping provided the basis for five meals and cost twelve dollars and seventy-five cents. 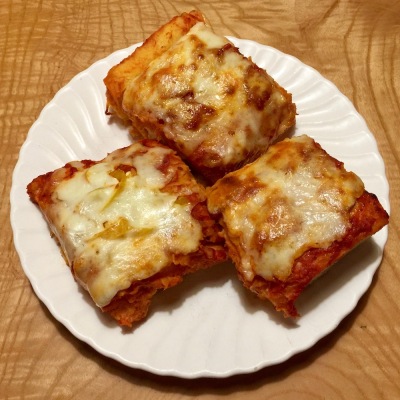 Here’s the heartbreaker: J.T. Sassak is 67 years old (“born the same year the shop opened”) and not only is there no apprentice learning the ropes, there’s no one in the family remotely interested in taking over operation of the small-town pizzeria.

Selling the business is out of the question, J.T. says, as the grandfathered-in commercial license on (otherwise residential) Knox Ave. would likely not transfer to a new owner and moving the location “wouldn’t be the same.” J.T. says he’s got around five more years left in the business and “then we’ll see.” At some point in the not-too-distant future, Nuzzaci Pizza Shoppe will likely close up forever.

If you love great pizza—unique pizza, special pizza—I’m imploring you: make the trip out to Monessen for what may be one of the most heavenly culinary experiences of your life. It’s worth it. 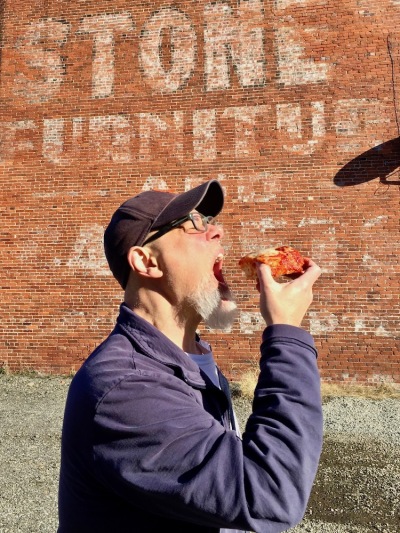 Ghost sign; real pizza. Completely unstaged photo of Paul about to devour a slice of Nuzzaci’s he describes as “like fluffy pizza clouds.”

A couple things to know if you’re going:

The Pizza Chase is an occasional series where we document regional pizzerias that do something fundamentally different or extraordinary with ol’ cheesy.