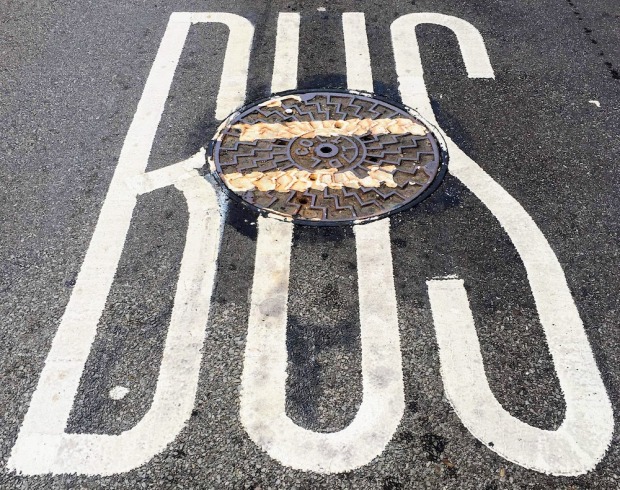 They had, the joke goes, one job … but it wasn’t this one. In this case the specific task was probably something pretty important: keeping electric power running between buildings; telephone and Internet connectivity; making sure the sewer system doesn’t back up into your basement.

What the job clearly didn’t involve is paying too close attention to how exactly the door was closed when the real work was done and the crew packed up to move on or go home. 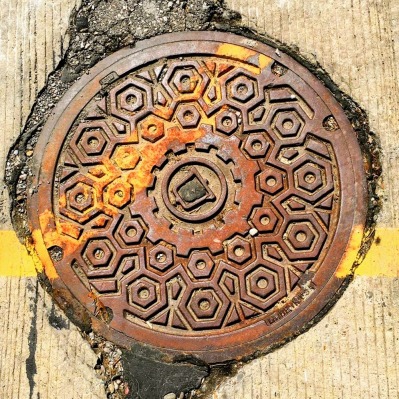 switch symbol off hole, North Side [photo: Off Hole/Greg Lagrosa]

Despite this relatively minor detail in the grand scheme of things, those of us top-side get the tiniest evidence that work was occurring under city streets in the form of manhole covers, striped in accordance with road markings and put back not quite where they ought to be. It’s a stretch to say these patterned cast iron discs tell us a story–or really anything–about what was happening below the surface, but we do know something was going on down there.

The effect on the visual landscape is more notable. Each of these little displacements creates a subtle but striking schism in the very regular, ordered, and predictable world of thoroughfare infrastructure. These are known as off holes. 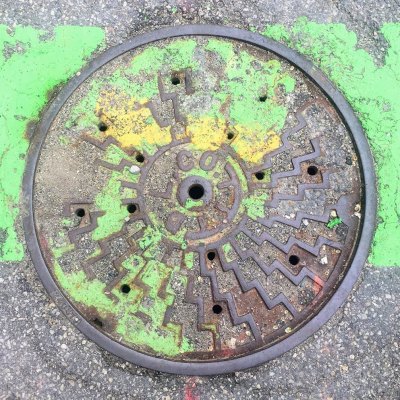 it’s not easy finding a green off hole, Downtown [photo: Off Hole/Greg Lagrosa]

“As a very neat person that needs everything in order, I couldn’t fathom how utility workers didn’t put the covers back in the correct direction,” says Greg Lagrosa, “I would never be able to do that–it would drive me crazy!”

Indeed, it would take someone with more than a little obsessive-compulsiveness to notice–let alone photograph, publicize, and catalog–the city’s off-kilter manhole covers.

If you’ve never noticed the phenomenon, you definitely haven’t been looking. Off holes–the name was coined by Pittsburgh artist Kirsten Ervin–are everywhere. It’s not much of an exaggeration to say that every intersection in the city, along with plenty of spots in-between, have manhole covers smack dab in the middle of cross-walks and lane markings. Many of these have gotten worked-on and most of them didn’t get put back in line with their paint jobs. 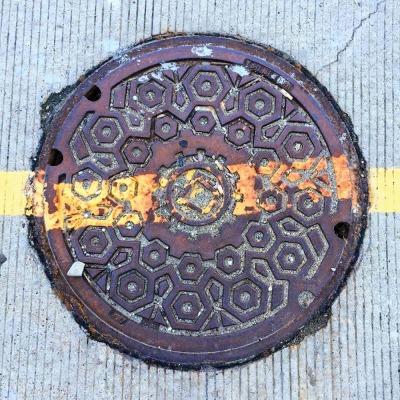 So close! Single yellow stripe off hole, North Side [photo: Off Hole/Greg Lagrosa]

“To me it’s all about your worldview,” Lagrosa says about the Off Hole project, “There are all of these small things happening in our city. Taking the time to notice the minutiae is a way of interacting with the city in a tangible and human way. Workers are obviously using the manhole covers–that’s why they’re there–we just barely ever see it happen. This is a window into how things work and those lives and stories.”

Lagrosa is regular bicycle rider who commutes from his home in Stanton Heights to a job downtown. As a self-described person that “hates driving and walks and bikes around as much as possible,” he began noticing off holes everywhere he travelled. 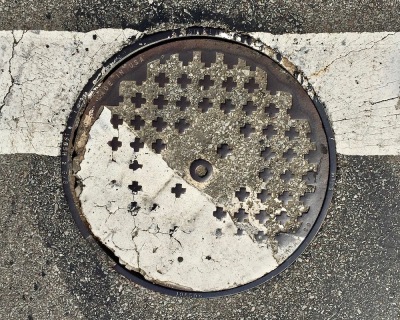 After studying the random occurrences of off holes throughout Pittsburgh, Lagrosa started studiously photographing each specimen–both as a straight down top view and a broader-context “in the wild” shot. The location and other details are logged in a spreadsheet and one photo a day gets posted to the @off.hole Instagram account.

Nearly half a year into the process, Lagrosa describes some favorite patterns or types of off holes that have emerged:

In my opinion, the best off holes are the clean ones. Just one or two painted lines across the hole, the paint is still really clear and it’s just off. Something like this: 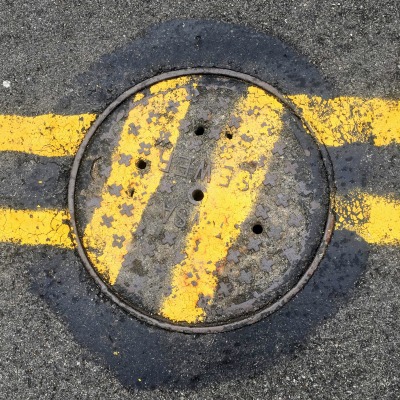 The off holes I wasn’t sure about the most are where the old line is off but it’s been repainted and the new line is still on. At the end of the day I decided this was fine too: 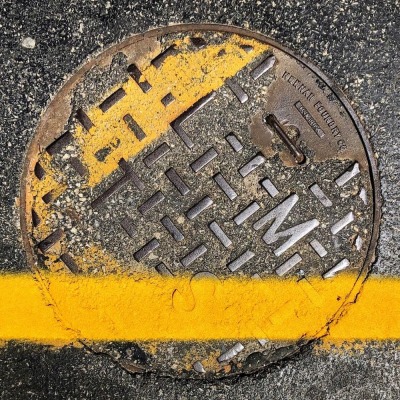 There are the ones where multiple lines have been painted and they are all off: 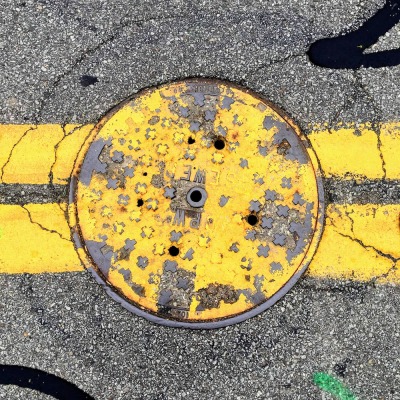 And finally, some of them just create cool designs that I like: 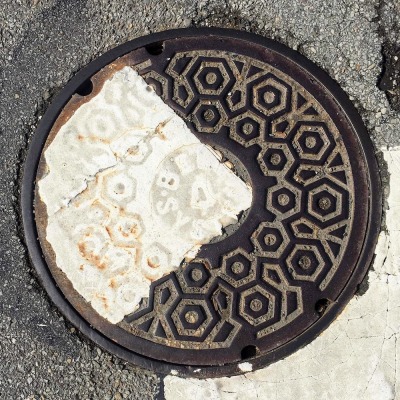 The concept is still a relatively new thing, but Lagrosa has considered expanding into other Internet platforms and possibly going full-on Off Hole IRL in the form of an art show or t-shirt. [Editor’s note: sign me up for a men’s XL!]

For now, though, the focus is mainly on collecting and expanding the Off Hole community. While Lagrosa lives here in Pittsburgh, he accepts–and encourages–submissions from anywhere with pavement and manhole covers. (See details, below.) 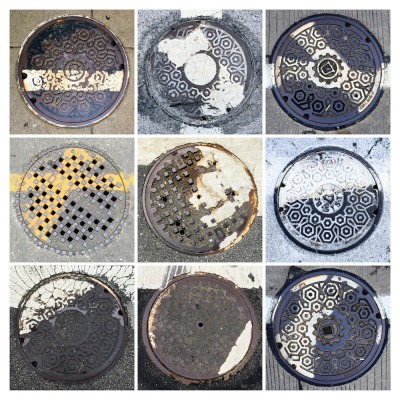 a collection of off holes submitted by Orbit staff photographers

When the robot work crews take over, off holes will likely disappear forever. Heck, there are probably industrial designers working right now to try to solve this “problem.”

Here at the Orbit, we love off holes–and Greg’s got the clogged In box to prove it! The phenomenon is another example of the superiority of randomness over hyper organization, faded paint that tells a story to a crisp line’s empty page, and the indefatigable human desire to leave work early and get on to Miller Time. We can all learn something from this. 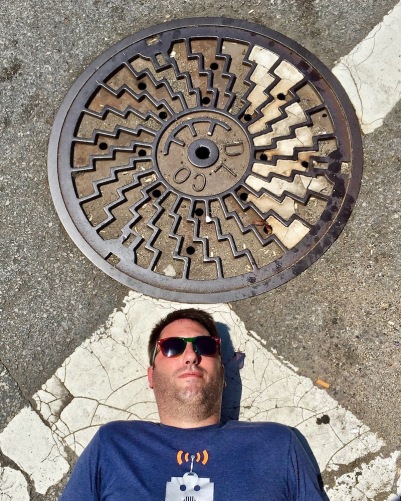 Friend of the streets. Off Hole’s Greg Lagrosa with a new find, North Side.

Postscript: If there’s a moral to the story it’s that sometimes the cloud may actually be its own silver lining. When asked if on holes were more or less satisfying since commencing the project, Lagrosa responds resolutely, “On holes are just future off holes. I definitely take notice of painted holes in unusual spots and wait for them to go off.”

Think about that for a minute: the guy with self-described OCD who would be “driven crazy” by a misaligned lane stripe actually looks forward to a disruption in his space-time continuum. Whatever you say, that’s progress.

To submit an off hole you’ve found, email photos to off.hole.pittsburgh@gmail.com or direct message the @off.hole Instagram account.

Per Lagrosa, “I like to get two pictures for each hole, an overhead shot and one that shows the hole in context. The overhead is the money shot and is the most important. I also need the location, date, time, and your Instagram username so I can credit you.”

7 thoughts on “Waiting to Go Off: In the Street, On Target, and Under the Bus with Off Hole”