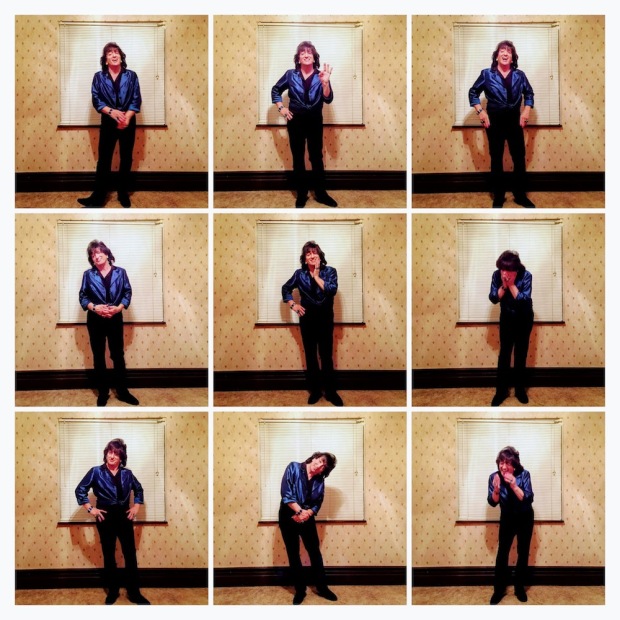 Renowned veterinary doctor Theodore Nugent said it best: “I don’t know where they come from, but they sure do come.” Dr. The Nuge was speaking to a particular feline ailment, but he may as well have been consulting on web metrics.

‘Tis the season for reflection, year-end lists, and sitting on one’s keister instead of hitting the bricks in pursuit of new content. This is that one time per annum when we open the blogging master console and crunch the numbers on what people were actually reading this year. 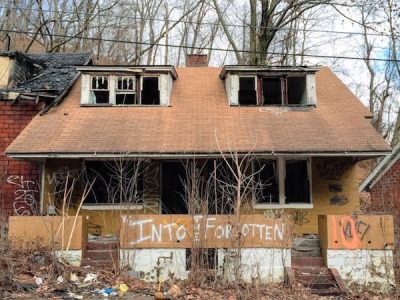 “Into to the forgotten” maybe, but not for Orbit readers. Clairton’s ghost neighborhood.

It turns out that every single day we still get dozens of visitors coming in to read the years-old stories of Clairton’s ghost neighborhood (2017) and the wacky-terrifying antics of Bill Ansell and his Christmas cul-de-sac of nightmares (2016). Somebody from Reddit linked to our Twin Sycamores of Sheraden story (2015) for a page view spike we’ll likely never experience again.

These three non-2018 stories were our most-read of the year. So this time around we’re just going to go with the top articles that were actually published in the last twelve months. We’ll follow that up with our “staff picks” of favorite sleeper posts that showed up in the lower reaches of the list, but we believe deserve another chance at your eyeballs.

The Orbit will be off next weekend, so happy holidays and we’ll see you in 2019.

Rachel Ann Bovier aka Billie Nardozzi aka Billy Nardozzi (photo, top) came into our lives more than a decade ago via the ingeniously-D.I.Y. publishing method of running weekly poems in the Post-Gazette’s classified ads. Lately she/he [Bovier/Nardozzi: “I’m still figuring that out.”] has gone even more big time–quite literally–with a full-size billboard that you can’t miss on Bigelow Boulevard. Pittsburgh noticed. 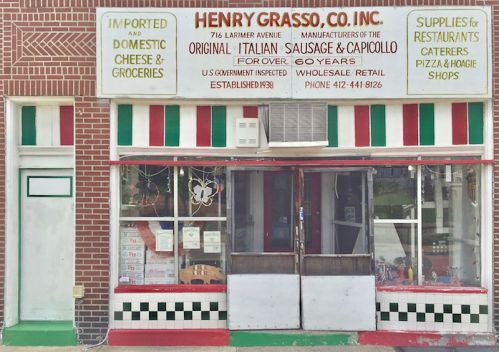 Henry Grasso, Co. Inc., one of the last traces of Larimer’s “Little Italy” past

From a throwaway line in the movie Striking Distance (see following item), Dennis Farina kicked this Medigan’s gul into a block-by-block, alley-by-alley trolling through Larimer looking for any traces of what was once Pittsburgh’s largest “Little Italy.” The short version: there ain’t much left. But it was a lot of fun looking, researching, speculating, and hearing the community’s feedback. 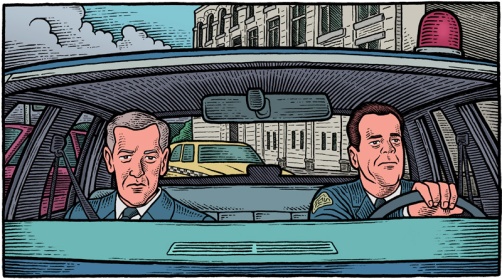 It was just about this time last year–an icy cold New Year’s Day, if this blogger recalls–when the idea came to retrace the Striking Distance “Take Bigelow” chase scene as a prompt for a then-and-now look at two views of Pittsburgh, separated by 25 years. Then we realized that to do it justice, we’d need to wait half a year until the trees were at full foliage and sun was out so that we could actually compare apples to apples.

No matter. That just led the dedicated Orbit staff to a springtime of repeated viewings of the library’s DVD, triangulating locations, and wondering what Jo Christman ever saw in John Hardy. Then Mario Zucca and his amazing original illustrations came into our lives. ‘Nuf said. 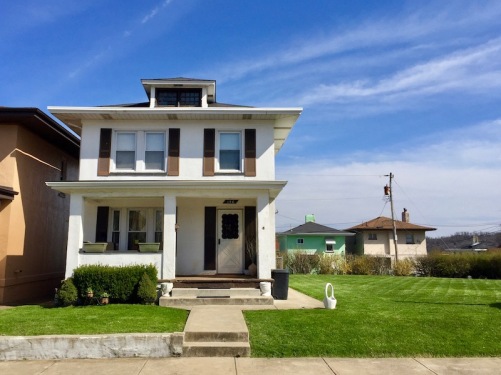 Little Donora, 30 miles south-southeast/upriver from Pittsburgh, has had a rough run. The mills shut down a decade or more before its Mon Valley peers and it’s now remembered primarily for the deadly smog of 1948–an environmental disaster so severe it was a major factor in the formation of the E.P.A. [This history is all covered in the terrific Donora Smog Museum.]

But Donora has a fascinating history outside of air pollution and there is a small, but committed, group of local historians and preservationists who work hard to let you know about it.

There’s nowhere better to put those pieces together than Cement City–a retro-futurist development on the south side of town. The neighborhood was built just about a hundred years ago on technology pushed by Thomas Edison who saw poured-in-place concrete housing as the vision of the future. It didn’t turn out that way, but Donora still ended up with a great little neighborhood. 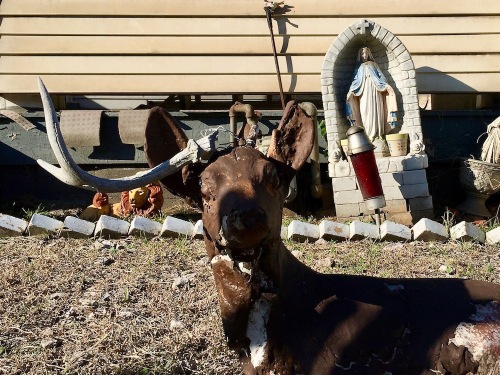 One of the many front yard Marys in little Presston, McKees Rocks

If you’ve never heard of Presston, you’re not alone. The little one-way-in/one-way-out neighborhood is just about as cut off from the world as a place could possibly be and still see the skyline of a (semi-)major U.S. city.

There are inevitably many great stories from this edge of McKees Rocks [Presstonians: we’re just waiting for the invitation!] but last month we dug into an old favorite: front yard Marys. Presston has just about as many–house for house–as anywhere we’ve been. 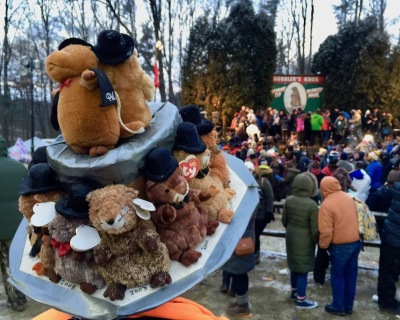 To live in Western Pennsylvania and not make the trip up to Punxsutawney for Groundhog Day–at least once–is a crying shame. The yearly event is as wholesome as they come and way goofier than we could have predicted. Orbit staff were there for the whole thing–2:00 AM to daybreak–and came away with an entirely new appreciation for groundhog fashion, “hog heads,” and the collective defiance of winter.

That this story–with some fine writing and fun pictures–didn’t get more attention was a bummer. Maybe people were just groundhogged-out by the following weekend. Now, we’re just in time to get the hype machine going for GHD ’19, so take this op to catch up. 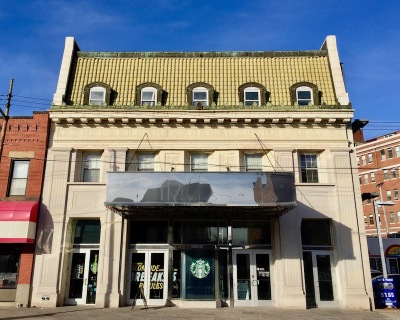 There was a period in the early spring when it was all ex-(movie) theaters: combing through historical maps, cruising the Cinema Treasures site, mentally reconstructing radically-altered façades. That was all in the service of a planned series on what’s happened to all the old movie houses that used to line the commercial drags of every decent-sized town in America.

We got as far as the recently-closed theaters we could still remember from the 1990s–places like the old Plaza in Bloomfield and Cinema 4 in Dormont, Bellevue’s dirty double-screen and the street-straddling pair of Cheswick theaters. Hopefully we’ll get back to this series–heck, we’ll make it a resolution!–as there are just a ton of them out there. 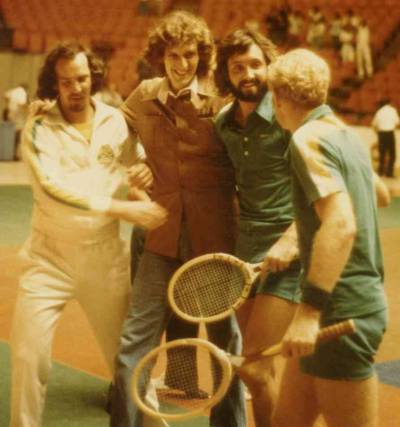 Members of the Pittsburgh Triangles of World Team Tennis, 1976

No Room For Squares: When the Pittsburgh Triangles Were Golden (April 29)

Clint Burton was a teenager in the mid-1970s when Pittsburgh had its own squad representing the short-lived World Team Tennis league. He was there on the sidelines, hired by his uncle to be the team’s stats guy, when the Triangles won the league championship in 1975.

Clint’s first-hand account of seat-of-the-pants sports management in a fledgling league, a wide-eyed teenager hanging-out with world-famous sports stars, and filing game recaps to Super-Tiebreaker magazine is a great story we were very proud to tell. 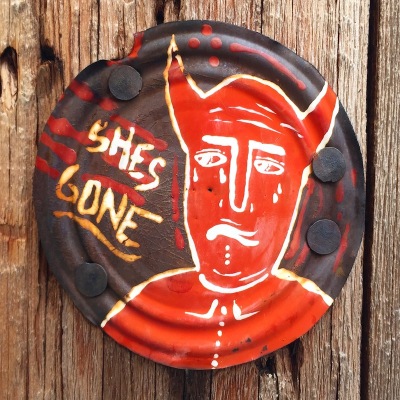 Tin Can Pole Art, Part 2: A Date with Some Little Devils (June 3)

Who takes the severed lid from a tin can, paints a tiny work of art on it, and then tacks that piece to a utility pole for public consumption? Why, angels must do it, right? And what do these haloed Robin Hoods choose as their subject? Devils!

O.K., the artist or artists involved in this particular genre of pole art may or may not be either divine or particularly pure of thought, but they sure do create interesting little specimens that make for a wonderful ongoing egg hunt. 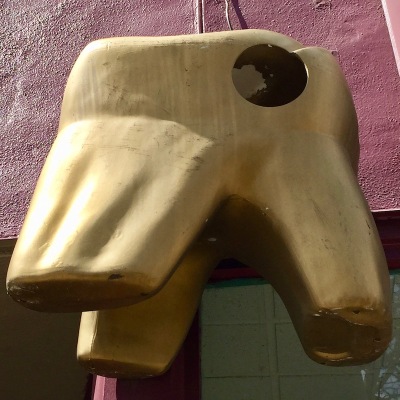 you can’t handle the tooth (art)!

If you haven’t been paying attention, you might have missed just how many giant teeth are out there in front of Pittsburgh’s–and the rest of America’s–dentists, orthopedists, and oral surgeons.

It’s a strange phenomenon that this one medical field chooses to advertise itself with large–often 3-dimensional–renderings of the body part to-be-worked-upon. You don’t see a similar number of outsized eyeballs, spines, feet, ears, noses, and/or throats. There is so much great dental art, we’re already most of the way to a sequel. Hopefully, that’ll give you something to look forward to in the new year.