Close your eyes. No, wait–open them back up. You’ll need them for the rest of the piece.

Imagine the view of downtown Pittsburgh, straight-on, looking due east. You know the scene, even though few of us actually see the city from this middle-of-the-confluence angle. There are the spiky towers of PPG and Fifth Avenue Place in the foreground, Grant Street’s tall buildings farther back, various middle-height apartment and office buildings. The Fort Pitt and Fort Duquesne bridges bookend the whole display.

This is remarkable because–unless you’re a riverboat captain or Canada goose–you probably never see the city from this viewpoint. Sure, you can get a slimmed-down approximation standing near the fountain, looking back across Point State Park. But unless you end up on one of the Gateway Clipper party boats or happen to take a canoe out on the water to just the right spot, you won’t see the real thing.

That image, though, is instantly recognizable because we see it so often in so many places.

In this, the third collection of Pittsburgh skyline art, we’ll round up the latest findings. Links to the earlier stories in the series are included as well, below.

Ciminelli Property Management and Arnold’s Tea House (above, top) have remarkably similar renderings of the downtown skyline. Both are from that same midde-of-the-rivers perspective with wide cinematic dimensions and both use the device of representing depth via shifting color values within the same palette.

Arnold’s has a folksier appeal as it’s clearly been painted by hand, directly to the tea shop’s wooden façade. Whereas Ciminelli is a pro job reproduced for the company’s maintenance vans (and likely other corporate materials). We’re fans of both.

The décor for Bridgeville’s Railroad Grill & Tap Room includes this innovative flat skyline in black silhouette, backlit by glowing yellow-orange lights. It’s a nice touch that likely goes unnoticed for many of the restaurants’ patrons inevitably dazed by the dozen or so sports-focused televisions. Yeah, The Orbit would proudly eat the onion rings and quaff the porters and brown ales at an all-skyline tavern. For now though, we’ll live with Railroad Grill’s hip height offering at the host station. 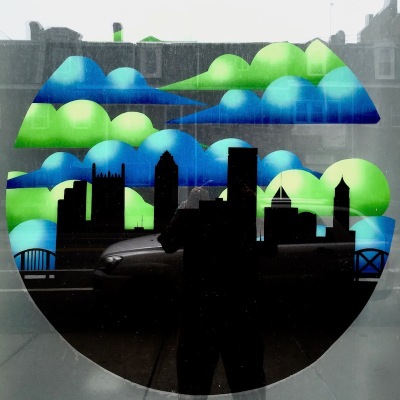 Pretty sure this one is gone now, so be glad The Orbit was there to remember it for you.

Über-stylized green and blue bubblegum clouds hover over downtown, appearing in crisp black silhouette in the wordless logo for an unknown Bloomfield business. This one is interesting in that we’re looking at town from the Hill District, facing west (with PPG on the left hand side) or the installers just chose to place the image on the inside of the office’s glass window making their customers see the inverse. If that’s the case, somebody goofed. Maybe that’s why this business isn’t around any more.

Greater Pittsburgh Plumbing doesn’t fool around with city iconography. The company logo–repeated on three sides of the crew’s work van–features a giant golden triangle, black-and-gold color scheme, and a spot-on downtown skyline. We can’t attest to how well GPPHC can snake a drain or run a new service line, but they get a triple-A rating for hometown pride. 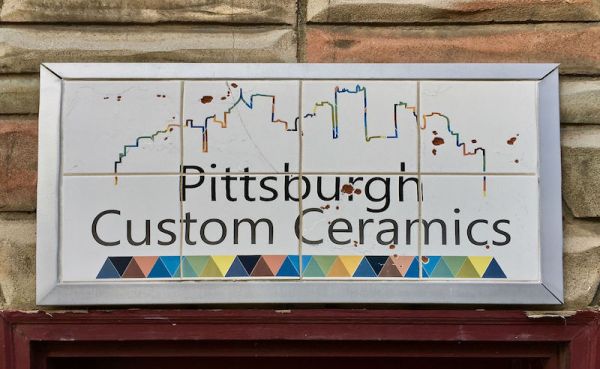 Pittsburgh is famously the Steel City and thanks to Alcoa, PPG, etc. we could also legitimately claim to be Aluminum City, Glass City, and/or Paint City–although none of those sound quite as cool. [Also, Cleveland might have a better claim to that last one.]

Pittsburgh Custom Ceramics, operating out of a small storefront on Sharpsburg’s main drag, throws in one more raw material by rebuilding downtown in 6″ x 6″ tile. Here, the familiar skyline is rendered in a single continuous outline that seems to cycle through all colors of the rainbow.

In the most gestural of today’s offerings, Pittsburgh is simplified down to three tall buildings–Fifth Avenue Place, the U.S. Steel tower, and PPG–plus two bridges and the fountain at Point State Park. It’s all been created in neon light for a Heineken Beer sign in the window of bar that may or may not still exist. Count it.

One of these includes the downtown skyline, cast in amber hues from that same looking-east vantage point. It’s not as pretty as the radiant blue skies and stylized cloud forms elsewhere in the design, but the nods to legit downtown buildings–you know which is which by now–make this a winner, too.

You’ve been past this one a zillion times, but it may never have registered. Heck–this blogger circumnavigated the whole building–an otherwise nondescript windowless warehouse on Liberty Avenue–which is decorated with a dozen similar-styled paintings, and I still can’t tell you what the damn place is.

Regardless, the downtown skyline–plus a silent worker, wind farm, and nuclear reactor–look great in their various shades of purple. Over at The Portland Orbit, the crew was Johnny-on-the-spot last year with a Prince tribute to his signature color. If we had been thinking, this would have been Exhibit A.

Got a tip on a cool version of the Pittsburgh skyline? Hook us up!