One glorious day–and a Sunday at that! Deep blue skies, whispy cirrus clouds, bright sunshine, and seasonally optimistic temperatures requiring only a long-sleeve shirt. Those who failed to leave the indoors on this 24-hour reprieve between Thanksgiving’s elongated drizzly gloom and the following Monday’s snow-filled temperature plunge should feel all the guilt and remorse they deserve.

Just jaggin’–no judgment, here. This blogger, however, wasn’t going to miss the opportunity. The Orbitmobile was sprung from its hutch, tires inflated, and chain oiled. We were off to town on a mission to check out the brand new Mon Wharf Switchback. 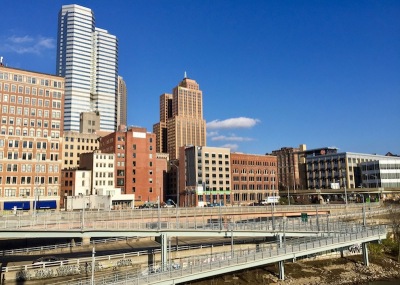 It’s been said that Pittsburgh is the only city with a front door. Indeed, the approach from the morass of Parkway West suburbia/airport/I-79 to the awestruck oohs and aahs emerging from the Fort Pitt Tunnel into a seeming city from nowhere is truly spectacular, unparalleled, and–I can attest, twenty-some years on–never gets old.

That said, one can only reach that front door with a motor vehicle. For those arriving in our fair city by bicycle–and yes, thanks to the Great Allegheny Passage trail, plenty of newcomers get here on two wheels–it’s a less dramatic entrance. That changed, at least a little bit, with the completion of this last connection point allowing car-free passage into town from the Smithfield Street Bridge.

As of now, the incoming cyclist may exit the Smithfield Bridge to be gently guided down to the previously-existing, but hard-to-get-to Mon Wharf Landing parklet hugging the riverbank. The method is a long, graceful switchback ramp connecting 40 or 50 vertical feet from bridge deck to walkway below.

The park a lovely open space with a wide walkway, stone resting spots–they’re not quite benches–and a thin strip of green grass. Native maple trees–presumably planted back at the park’s opening in 2009–have managed to cling to their deep red fall leaves long after wimpier peers dropped all outerwear weeks ago. 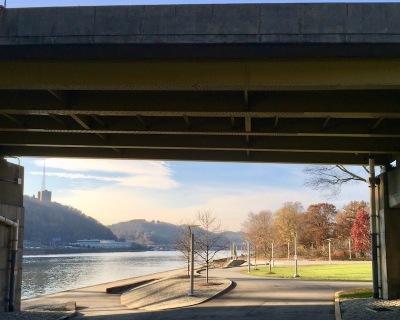 The new ramp doesn’t just connect downtown with the South Side. One can now, in theory, ride continuously from Point State Park all the way to our nation’s capital without having to contest with any car traffic. Three hundred and thirty-five miles, in fact, as the crow dodges and weaves, crosses the Alleghenies, ducks through tunnels, and follows the curling banks of various old rivers.

That is one hell of an accomplishment for long-distance, intrastate bicycle recreation[1], but the new ramp that allows connection from the upriver side of the Smithfield Street Bridge through to Point State Park–is likely going to be much more useful to the city’s cyclists for their around-town commutes and pleasure cruises.

We’ll spare the particulars, but if you’re a city cyclist, you know getting from, say, Penn Avenue to the South Side was a pain in the ass. Thanks to this new infrastructure, one can make that ride safely and with a spectacular 360° tour of all three rivers.

The Mon Wharf bicycle/pedestrian route: “Motor vehicles only: no pedestrians”

Though the ramp has been publicly accessible for a week or two, the opening will be made official with an event this Tuesday. As of last weekend, there are still some final touches to the overall route we hope they’ll eventually get to.

Most notable is the lack of signage directing the connection-curious to and from Point State Park. From the latter, one must–on blind faith–go under the bridge ramp overpass, pass a maintenance vehicle parking lot, along the thin connection beside a highway ramp, and then down the fairly steep ramp to the Mon Wharf. This only-possible route takes the walker/bicycle rider directly under a (roadway) sign with the confusing message MOTOR VEHICLES ONLY: NO PEDESTRIANS (see photo, above). [This is a minor quibble that we assume city crews will get to–and may already have.] 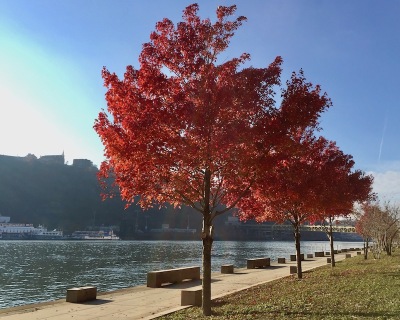 The Mon Wharf Landing and switchback ramp are projects from Riverlife and the City of Pittsburgh. The commitment both have shown toward making the city bike- and pedestrian-safe, friendly, and accessible should absolutely be recognized and praised. From the (mostly) bicycle-based Orbit staff, a very big thank you–we’ll be putting the new route to use as often as we can.

[1] Between the GAP and C&O, the two trails run through Pennsylvania, Maryland, West Virginia, Virginia, and the District of Columbia.