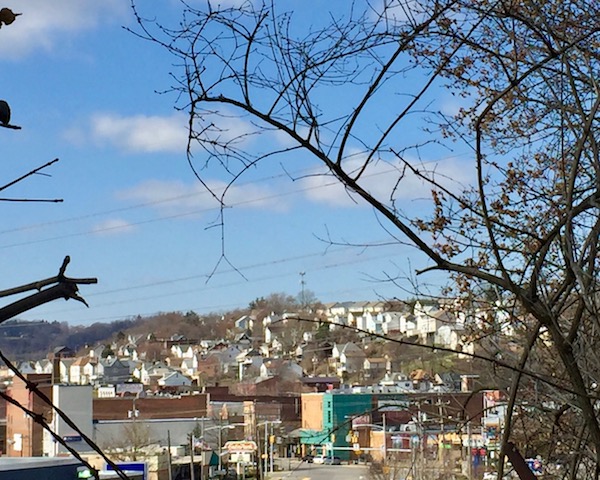 Esplen: Gateway to McKees Rocks. View of downtown McKees Rocks from the end of Radcliffe Street.

This blogger ain’t too proud to admit he had to look it up. Where the heck is Esplen? Well, it turns out we’d been there–or, at least, driven past–plenty of times and just didn’t even know it. You probably have as well.

The little boomerang-shaped neighborhood sits at the far western edge of the city, bounded by the Ohio River, Chartiers Creek, and a set of train tracks. There is no welcome sign. If you don’t live in the area, you’ve still probably whizzed by on West Carson Street/Rt. 51 as it heads out toward McKees Rocks, Neville Island, Coraopolis, and points west. In fact, from several Esplen dead-end streets there are some quite fine, elevated views across the creek to Chartiers Ave., downtown McKees Rocks’ main drag[1]. 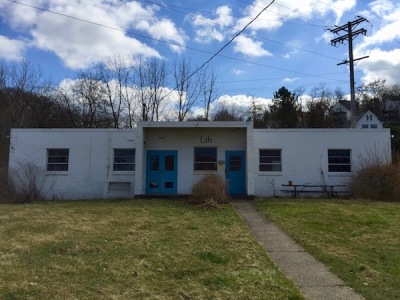 A visit to Esplen won’t take you all day. With ten or twelve very short streets, plus a similar number of alleys and block-long connectors–may be a couple hundred total houses–you can probably tour the entire neighborhood and still have time for the Sunday crossword all before lunch.

Esplen is largely zoned commercial/industrial and is home to several small factories, a trucking center, some kind of chemical plant with its own mystery “Lab”, two different plumbing and heating outfits, etc. All this and the only actual retail business is a single Sunoco station. Presumably, Esplenites cross the creek to shop in the Rocks’ business district just blocks away.

Esplen is a tiny neighborhood–among the smallest in the city both in acreage and population–but it still has a bunch of our favorite Pittsburgh things. There is a fine pair of front yard Marys at two different Oregon Street houses, some rugged untamed hillsides–one with a couple weird tunnels (storm drains from uphill Sheraden? former sewers?)–and a set of houses built on the face of a rock wall so steep there are two flights of steps to get to the front doors. A hand-painted sign informed us the mail is delivered milkman-style via the Caledonia Way alley behind the houses.

This is why the mail is delivered via the back alley/side porch, Oregon Street

There is no official art gallery in Esplen, but one Poplar Way cinderblock garage has its exterior wall stocked with an odd assortment of recycled signage, plus the grill from a truck, and a sun-bleached portrait of Elvis. In a pinch, it’ll do.

Another Oregon Street house (not pictured) will be fully decked out for the holiday–you name the holiday–complete with both a prominent rebel/Confederate flag and a framed poster of (black athlete) Bo Jackson on the front porch. Esplenites are clearly comfortable with dichotomy on this matter. 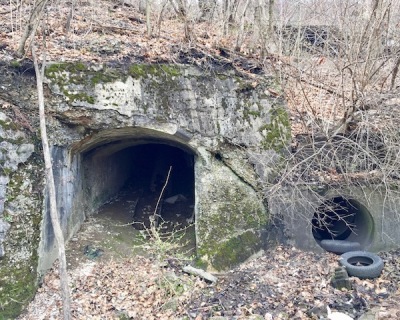 Should you add Esplen to your must do list? As pro-Pittsburgh/gotta-see-it-all as The Orbit is, it’s hard for even us to lobby this one. It’s a cheap date, for sure–you’re only out the couple bucks for a Sunoco coffee and the gas to get you over the McKees Rocks Bridge[2]–but Bicycle Heaven is free! If our time was worth anything, would we be blogging?

That said, there’s just not much for even the most easily-amused to poke around and ponder upon. Esplen is essential if you’re trying to visit/report on every one of Pittsburgh’s 90 neighborhoods (we are), but we still recommend you take your out-of-towners to more A-list attractions like the Rising Main steps, Howard Street, or the ex-atom smasher first.

[1] Our first visit–when we took all these photos–was back in late winter when the trees were still bare, exposing views of McKees Rocks that may not exist during the lush months of summer.
[2] The western neighborhoods of Pittsburgh are not easily accessible by bicycle from the rest of the city, so yes–we drove to Esplen. If any Orbit reader has a safe, bicycle-friendly route out that way, please let us know.

3 thoughts on “A Splendid Day in Esplen”