The Orbit doesn’t know what it likes, but it knows art. And we’re going to go out on a limb here and say that this fair city’s very best piece of public art is one that almost no one ever sees, tucked away on a dead-end street on the North Side*. Yes: it’s more exciting than the french fry sculpture, or the Tomb of the Unknown Bowler, or that red paperclip-looking thing, or even Dippy the dinosaur (yes: better than a dinosaur).

Back in February, The Orbit did a story on the Toynbee Tiles of Smithfield Street wherein we had the gaul to claim that “it doesn’t get much more ‘street art’ than [the tiles].” Well, this blogger is not too proud to admit when he has erred. The giant Howard Street painting was created right there on the street, by road workers, with special street line painting machines. This time we really mean it: you really can’t get much more “street art” than that.

We can only assume the city Department of Public Works (which has a facility right at the end of Howard Street) created the painting as some kind of test area for applying street directional/lane marking lines in white and gold. Whatever prompted it, the final creation is totally beautiful.

What’s miraculous about the piece is that the crew that laid it down stuck to a very particular fifty-or-so foot stretch of road surface, testing back-and-forth, on top of and just next to the previous runs. Howard Street is probably three quarters of a mile long, completely void of any houses or traffic, so the workers could have stretched their tests out lengthwise if they wanted to, but for whatever reason they chose to concentrate their dense repetitions on one contained area, approximately the width of one lane of traffic.

The result is a hypnotic series of dot-dash blocks of a common width, but with the off-register overlap of a cheap silkscreen job. Colors fade and flare irregularly where layers intersect, the grooved pavement cracks, and time and tide have done their various things. The big blocks suggest the abstraction of intense pixelization or a more figurative image refracted through raindrops. Staring at them long enough, letting your eye focus go soft, could easily work as a kind of Rorschach test.

My only regret is that I didn’t have one of those big Genie lifts on hand to take me up thirty or forty feet in the air to get a proper photograph of the whole enchilada. If I were running the Carnegie International, I’d be tempted to just exhume the whole road surface and bring it in to the big architecture hall. Or maybe they should just hold the International right there on Howard Street. That’d show ’em. 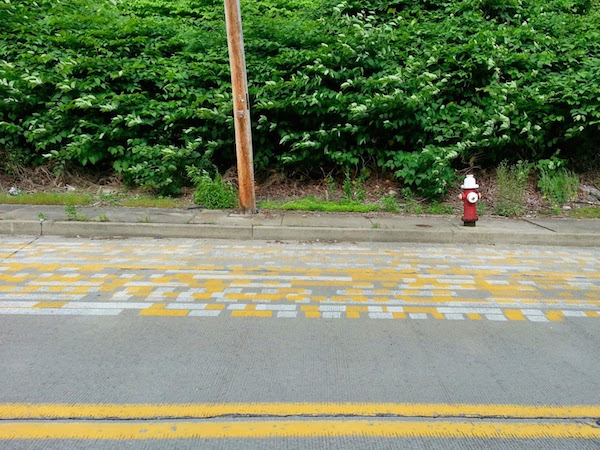 * The Orbit sadly acknowledges that the bar is extremely low for this particular category.