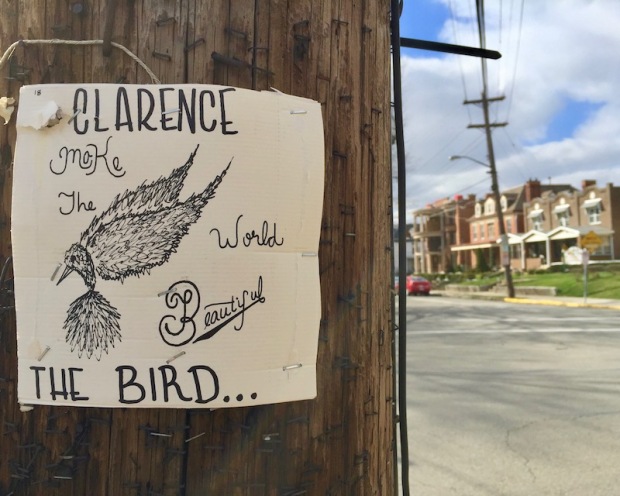 Call the little guy flighty, fragile, scrawny, left-leaning (or, at least, always left-facing), single-minded–heck, even a broken record! Sure, he could stand to put on a few ounces and what’s with that damn flipper-flapping all the time–give it a rest! Whatever you do, though, you’ll not call Clarence the Bird anything less than thorough.

When last we left the little fellow [Clarence the Bird Takes Bloomfield! Part 1: Millvale and Beyond, Pittsburgh Orbit: March 19], Clarence’s spring fever was in overdrive, nesting his feathers and pointing his beak throughout Bloomfield–down Millvale Ave., in the warren of cattywumpus alley-streets west of Edmond, and up by the Penn Avenue Aldi.

Impressive, for sure, but those sightings were merely the appetizer for the grand buffet that is Clarence’s A Beautiful Friendship campaign. 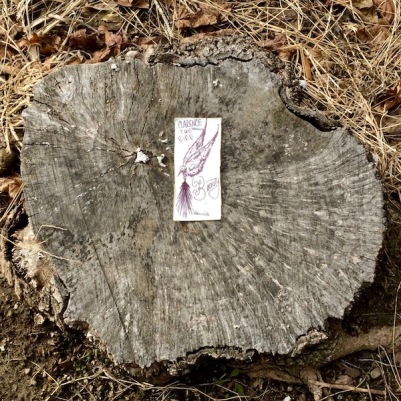 Friendship between Ella and Dupont Way

From the dense row house heart-of-Bloomfield all the way out to where Friendship Avenue becomes Friendship neighborhood, Clarence has left a bread crumb trail in cardboard and paper stock, fine-tipped ink pen and crude Sharpie. The tiny original artworks have been stapled, tacked, faded, torn, and (I’m sure) disattached and absconded-with. But the pieces still hanging-around–and there are a lot–look great covering (nearly) every single block up and down the long street.

Here then is the latest from The Orbit‘s Clarence Tracker 2000TM logging of Mr. The Bird’s Friendship Avenue activity, starting on the Penn Avenue/Children’s Hospital end and working east as far as South Pacific. 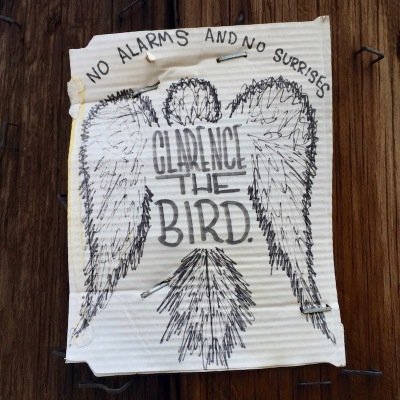 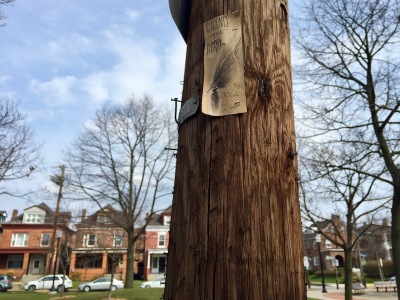 Friendship between Mathilda and Edmond 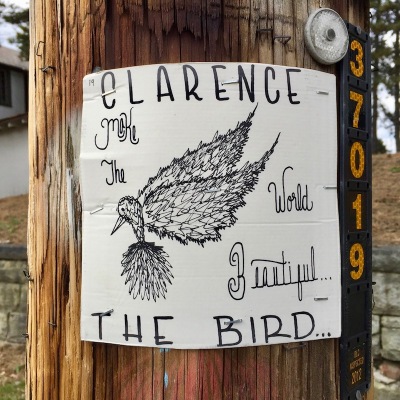 Friendship between Winebiddle and Gross 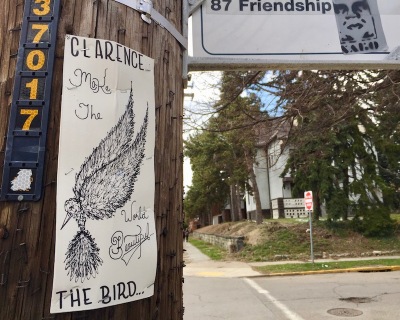 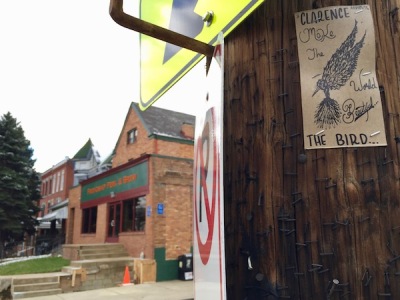 Note: There are even more Clarence the Bird “droppings” on the eastern end of Friendship Ave., between Pacific and Roup (at least), but the ones we found there were previously reported on in our story Birdwatching: Clarence the Bird Watching [Pittsburgh Orbit: Jan. 5, 2017].