It started innocently enough. That is, if a baby doll, its flesh painted gold and wearing a white onesie, suspended by a wire on its ankle and dangling upside down from a set of power lines counts as “innocent.” A couple weeks ago The Orbit spotted golden baby #1 near the corner of Penn and Main Streets, roughly in front of Constellation Coffee in Lawrenceville. We wrote about our amused and bemused impressions of it in these very annals. It was a fun little piece of street art (?) or possibly a goofy prank (??)–maybe a little bit of both–but that seemed like the last we’d hear from the golden dangling baby.

Then the tips started rolling in. First, reader Meredith reported a second golden baby, strung in the same manner, farther up Penn Avenue, at the corner of Winebiddle Street–she even included a photo. Another golden baby? we thought–we hoped–we fantasized. Where there’s two, there’s got to be more! Everyone knows that golden babies don’t arrive in pairs!

Look out below: Golden Baby #2 (aka “Winebiddle Baby”)

As a gloomy daylight broke over that first post-tip Saturday, this blogger took the bicycle on a chilly mission to cruise Penn Avenue in search of other babies–golden or otherwise. From 40th Street all the way to East Liberty we went–slowly, block-by-block, eyes in the wires–scanning for lofty abandoned newborns. Stop honking you jagoffs! I’m reporting here! We found the little lost soul Meredith had tipped us to and snapped some pictures, but that was it. Otherwise: bupkis.

This one had a marked difference from Constellation Baby, though. Not in appearance–the size, shape, gold paint, white onesie–heck, even the unclipped tag–were identical. No, Winebiddle Baby just looked a lot easier to install. First of all, he’s mere feet from the second-floor fire escape of the brick building on Penn. Anyone with access could easily hang this baby right off the landing. Second, the power line is much closer to the ground than Constellation Baby’s. The perpetrator didn’t even have to get up on the fire escape–he or she could have just stood on the roof of a car–or set up a stepladder–to reach the low wire.

Winebiddle Baby [note the easy access from the fire escape]

Two golden babies found, but the trail had gone cold. That is, until we happened to run into reader John one cold morning on the 93A heading to Oakland. Imagine this blogger’s eyeballs ka-boinging out of their sockets as John casually dropped the news “you know there’s another one of those golden babies down on Butler Street, right?”

No, John, we didn’t! And it’s lucky it snowed or my ass would have been on the shoe leather express frustrated that only two golden babies have been found instead of riding this bus talking to you! This is why tip lines exist! 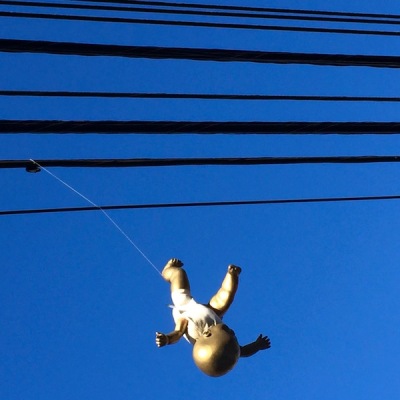 Hang in there, Butler Baby!

John’s willingness to come forward with evidence may be suspect, but his information is spot-on. Right there, in the wires above the 5300 block of Butler, dangles golden baby #3–and what a beauty she is! Glistening in an impossibly perfect deep blue January sky, gracefully spinning in the softest of breezes, Butler Baby is at peace with the world. Content to let the afternoon sunlight illuminate her golden skin, impervious to the cold weather, she’s lifted, weightless, and totally blissed-out. If only she’d let us know if–and where–she has more golden siblings similarly drifting through the ether.

3 thoughts on “More Golden Babies! [or] A Golden Baby Boom!”