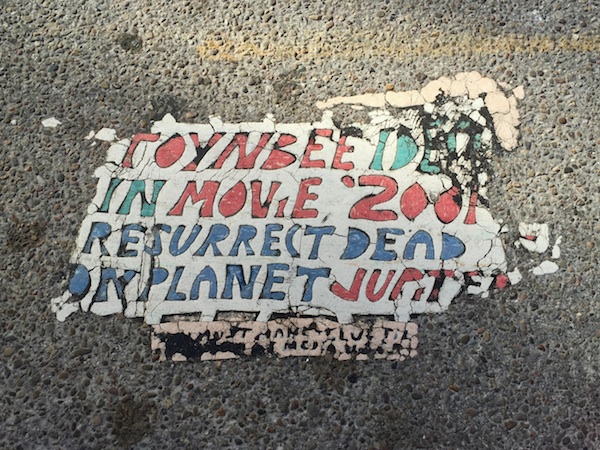 Resurrect dead while you can. The last remaining Smithfield Street Toynbee Tile, Downtown.

It was not that long ago (February, to be exact) when Pittsburgh Orbit filed one of its earliest stories on the great run of five “Toynbee Tiles” that were imprinted on Smithfield Street, approximately one per block from Boulevard of the Allies to Sixth, downtown.

This blogger likes to think The Orbit come a long way since those nascent days of yore, [Only two paragraphs of text? Who was doing the photo editing?] but looking back on this very recent history, it’s also a reminder of how rapidly (and drastically) things can change in the city as a whole. [Young people: for good or bad, back in the ’90s/early aughts, the words “Pittsburgh,” “rapid,” and “change” were never bundled in the same text.]

I’ve gotten in the habit of eyeballing and taking inventory of the Toynbee Tiles every time I ride through downtown, inevitably on Smithfield’s relatively-convenient route from the South Side to the great new Penn Ave. bike lane. It’s news to no one that there’s a tremendous amount of development happening in town right now–you see giant cranes, construction fencing, and torn up pavement everywhere you look. But I was startled to find that as of this past weekend–less than a year after that early blog post–only one out of the five Toynbee Tiles was still intact. The sole survivor (pictured above) is at the corner of Smithfield and Oliver Way.

It doesn’t seem like there was any malice involved here or that the tiles were actively removed in a clean-up effort. [Let’s hope not: the city has far bigger infrastructure-shaped fish to fry.] There just seems to be that much digging up of streets and running new, uh, things under them. The block of Smithfield from Sixth to Seventh has been totally resurfaced. 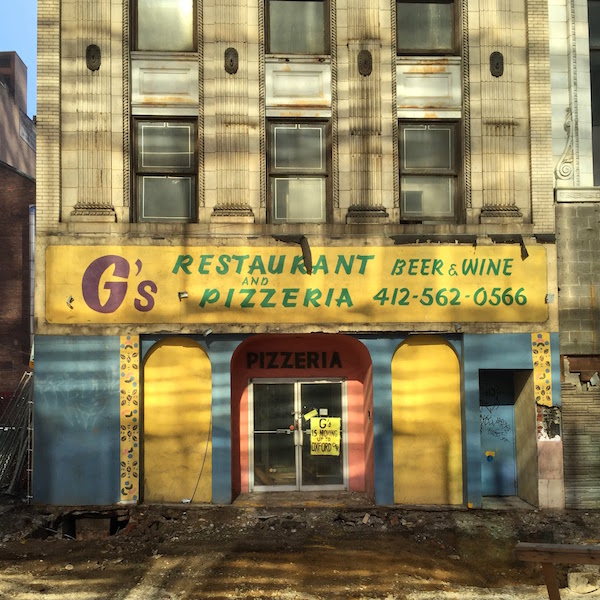 (The former) G’s Restaurant and Pizzeria on a torn-up Forbes Ave., Downtown

Fifteen years ago, me and a whole bunch of other concerned citizens drank a lot of beers and ate a lot of fried zucchini at The Chart Room in the name of not having downtown Pittsburgh eaten alive (or something like that) (hey: it worked, didn’t it? sort of?). The Chart Room is long gone (heavy sigh), but at least the building didn’t get torn down. [Sadly we can’t say the same for the old nickel bingo parlor across the street.]

No, The Chart Room got mangled by choice, in private hands, without needing any help from eminent domain. It’s strange to have lived through that extreme “Hail Mary”/desperation-style urban planning only to wake up in an entirely new world where big money comes in and builds big things all on its own. It’s different in a whole lot of important, structural ways, but still strangely the same as it seemed like it might have turned out to be. Resurrect dead, indeed.

Ah, hell. If you want The Orbit’s advice, go check out the last Toynbee Tile on Smithfield Street while you still can. It won’t be there forever.

2 thoughts on “An Orbit Obit: The Toynbee Tiles of Smithfield Street”