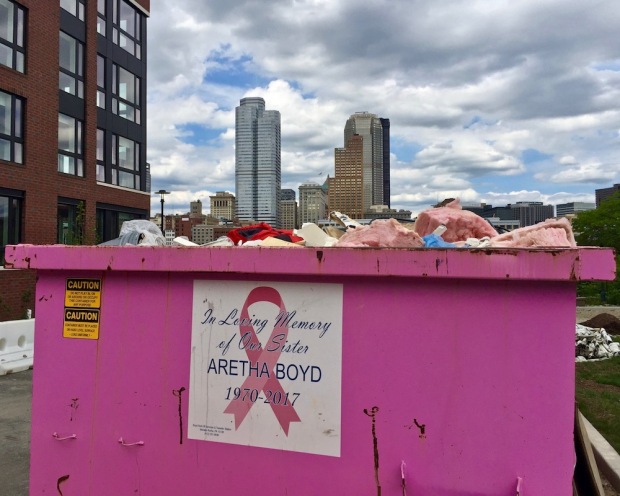 Admittedly, it’s an unlikely way to be honored in the afterlife.

Aretha Boyd was young, just 46-ish*, when she passed away three years ago. And while she may not have the (local) celebrity-level name recognition of, say, Mr. Rodgers or Franco Harris, you’ll find tributes to Ms. Boyd all over the city in ever-changing locales. In fact, the Boyd name may appear around town more often than those of Carnegie or Clemente, Mellon or Warhol. 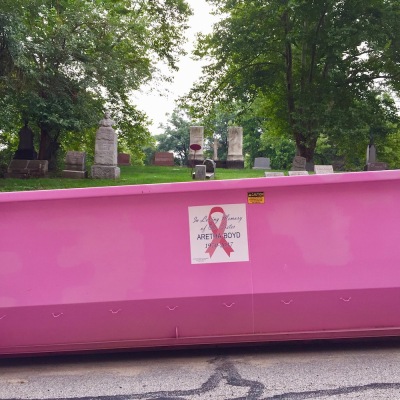 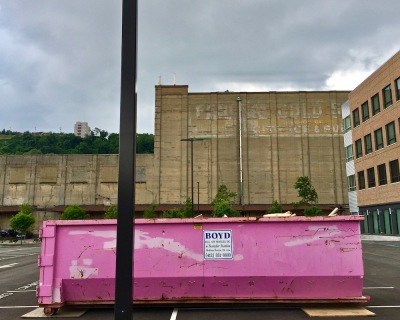 It may be a little harder to tell this year, what with that other health affliction getting all the press, but Breast Cancer Awareness Month is here. Just like the arrival of pumpkin spice, crisp mornings, and the first turning leaves, the nation’s pink-out begins right on schedule every October first and stays strong for the next 31 days in a branding and awareness campaign that makes all other diseases drool with envy.

The proliferation of pink ribbons and pink t-shirts will abound, as will coordinated group marches along the river trails, billboard advertisements, and public service announcements on broadcast media. In what is both absurd and lovingly allied, hyper-masculine football players will suit up in eye-popping “mangenta” gloves and cleats when they take the field–the black, gold, and hot pink color scheme is a little daring for most fashion runways, but hopefully gets the attention of Steeler fans. 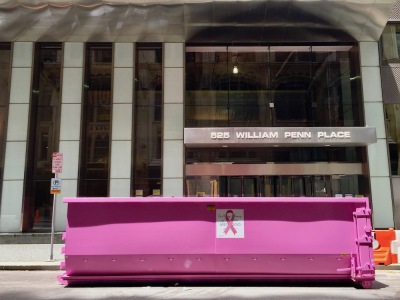 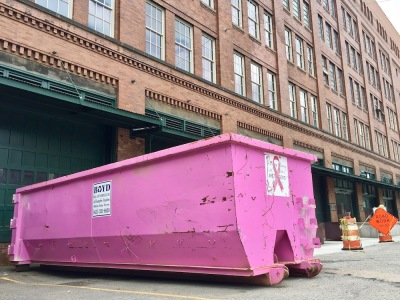 In a move no one saw coming, Boyd Roll-Off Services, a McKees Rocks-based waste disposal business, upped the ante considerably when their fleet of big 30-yard construction dumpsters  started appearing a couple years ago to spread the gospel. Each dumpster, painted in breast cancer awareness electric pink, contains a custom placard featuring the campaign’s trademark pink ribbon and the simple message In Loving Memory of Our Sister ARETHA BOYD, 1970-2017. 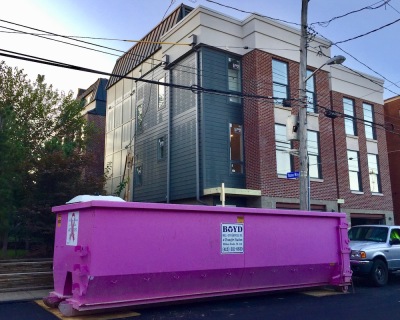 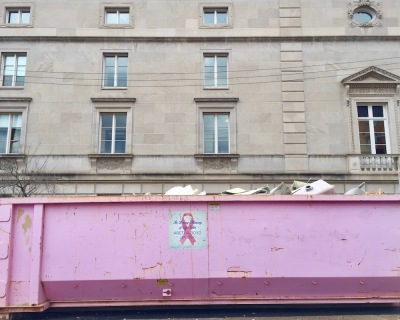 While they’re a little goofy, the pink dumpsters may end up being the awareness campaign’s greatest ambassadors … at least, here in metro Pittsburgh where you’re likely to encounter them on the street. The Boyd dumpsters aren’t painted pink just during October. No, they’re out there putting in the work and being visible 365 days a year. They can also be found anywhere and everywhere: at any job site or corporate office building, on downtown street corners and in neighborhood back-alleys. 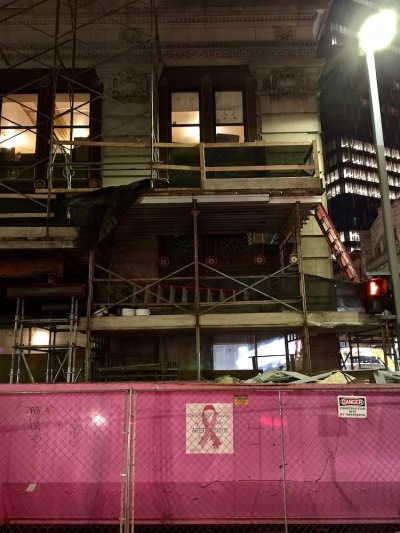 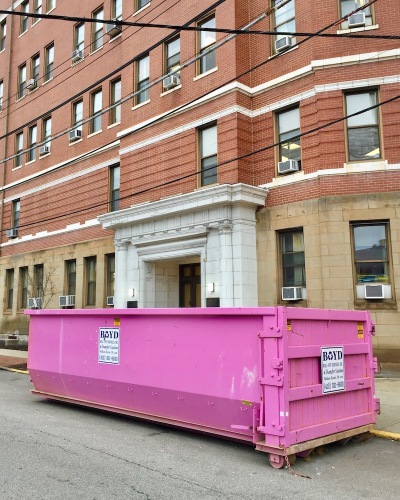 The need for public education around the disease is obvious; statistics for breast cancer in America are grim. According to the site BreastCancer.org, one in eight U.S. women (about 12%) will develop invasive breast cancer over the course of her lifetime, hundreds of thousands of new cases are detected every year, and we’ll lose around 40,000 women in the U.S. to breast cancer in 2020. The disease also disproportionally affects Black women. 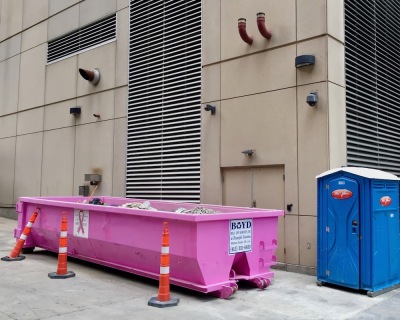 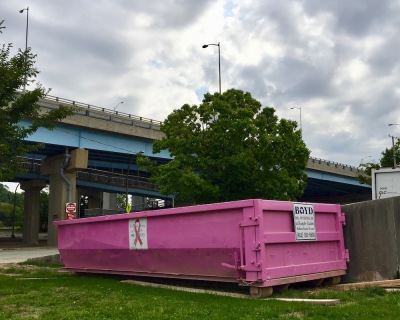 The street-side dumpster is a part of urban life we see all time. Its role as a big trash can for construction projects is pure utility with no expectation that it will ever be the object of attention. It will disappear into the night as soon as the job is done.

By painting the normally drab skiff bright pink, Boyd Roll-Off has turned the everyday into activist statement: breast cancer is for real, and it’s as omnipresent as the city’s concrete sidewalks and brick façades. And, of course, let’s remember Aretha Boyd and all the other women we’ve lost to this most heinous disease. That’s the message from Big Pink. 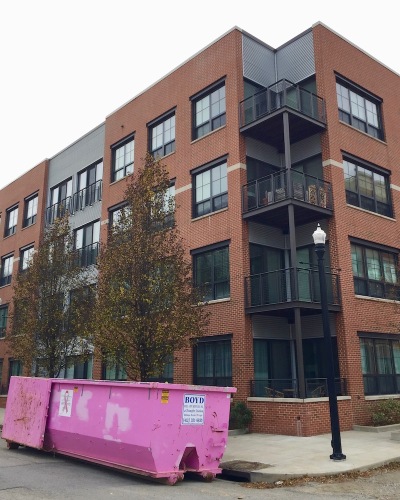 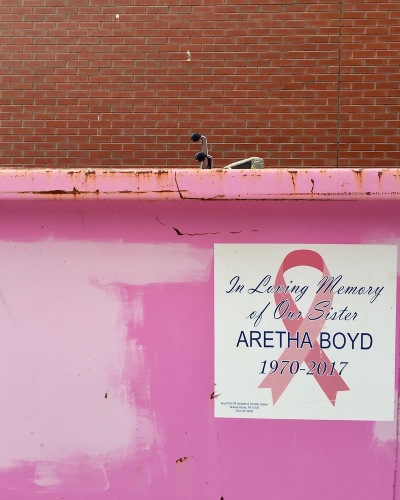 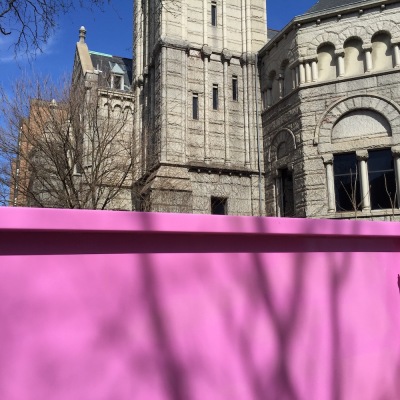 * The dumpsters clearly give 1970 as Boyd’s birth year, but Boyd Rolloff Services web site lists it as 1971. We were unable to locate an obituary for Boyd.