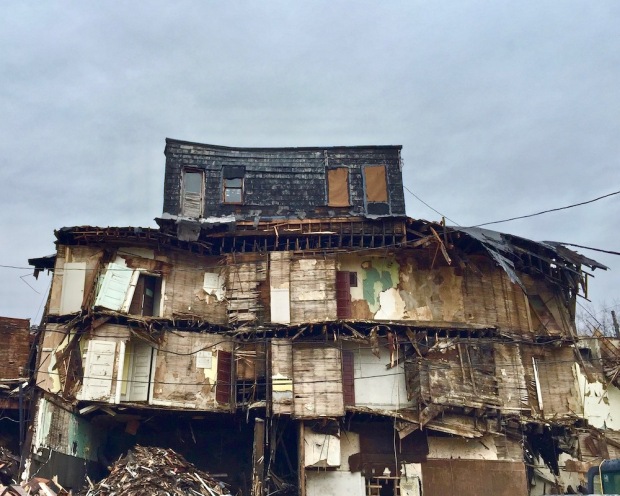 “We need something dramatic.” Downtown Monessen building, mid-tear down, 2019

Even a broken clock, the saying goes, is right twice a day. That’s true enough … unless one of the hands is missing.

It wasn’t until I was looking back at the quick couple of photos I’d taken last weekend that I realized the City of Monessen town clock–manufactured over a hundred years ago by the Brown Street Clock Company, right here in Monessen–had lost an appendage.

Now, that could happen anywhere and I’m sure it will be fixed soon enough, but this clock–not even right once a day–is about as perfect a metaphor for disjointed local government as you’ll find. 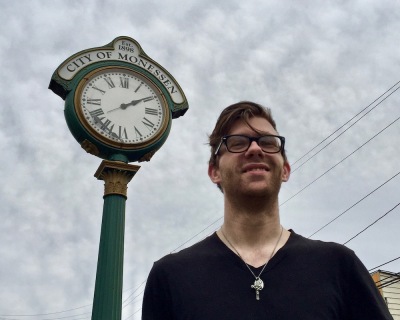 Even a broken clock is right twice a day…unless the minutes hand has fallen off. Monessen mayor Matthew Shorraw and the town clock.

River City: We got troubles.
Monessen: Hold my beer.

With apologies to “Professor” Harold Hill and the gang, Monessen would love to have a new billiards parlor–or any other business, for that matter–set up shop in town. The small city, 30 miles upriver from Pittsburgh in the Mon Valley, has lost two-thirds of the population it had at its peak in the 1940s. The mills started closing a couple decades later and the real death blow came when Wheeling-Pittsburgh Steel finally pulled out in the mid-‘8Os.

Downtown Monessen, a nine- or ten-block-long by two-block wide stretch of what was once bustling Main Street America, is now a gap-toothed poster child for the fallout of big industry in the Rust Belt. The remaining storefronts are equal parts gorgeous late Victorian and between-the-wars brick-and-stone, crumbling with decades of neglect, and newer, obviously-out-of-place attempts at mid-century modernization. In between are gravel-filled vacant lots and collapsing sibling structures, biding their time until the city has enough money to tear them down.

“We need something to spark a conversation.” The “HEALTH” building, downtown Monessen.

“This is a great place to live. I like it here,” says Matt Shorraw, the 28-year-old mayor of Monessen, midway through his first term in office. “A lot of family members have told me, ‘Get out–there’s nothing left here,’ but I’m not leaving. I feel like I have to be here.”

Say what you want about millennials–and believe me, Mayor Matt’s constituents are saying a lot about one particular millennial–but a young person committing to a life of service in the home town his own family is begging him to leave does not fit any negative stereotype of the generation.

Shorraw continues with a boundless optimism about the past-is-prologue potential of his home town. “It’s not an accident that Monessen was centrally located between five different county seats. We have easy access to I-70, rail lines, and we’re right on the river.” Shorraw also cites the low cost of living and the city’s location between metro Pittsburgh and the Laurel Highlands as virtues. “Eventually the success of Pittsburgh is going to make its way down through the Mon Valley.” 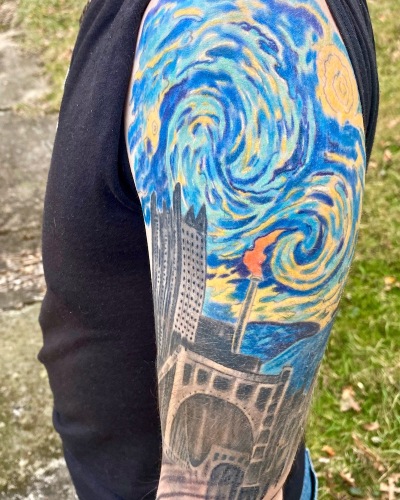 The last 30 days have been eventful for the young mayor. In December, he released an exhaustive 103-page document titled Monessen: A New Vision–The Mayor’s Strategic Plan. The comprehensive vision statement covers everything from nuts-and-bolts city issues like what streets to prioritize paving and park maintenance details to long-term, broad aspirational goals. These include the creation of a light rail transit link from The Mon Valley to Pittsburgh and a tech-focused “innovation district” downtown.

“I know it won’t all get done,” Shorraw says of the plan, “But we need something dramatic. We need something to spark a conversation. If we could only get the tax base, we could do incredible things.”

“We’re constantly doing damage control,” the mayor says of trying to keep up with the flood of maintenance issues in the city, “We’ve only been able to focus on paving roads and tearing down houses. We’re not looking 10, 20, 30 years into the future.”

So, Monessen has an enthusiastic young mayor, immersed in a hands-on crash course on public policy, realistic in the short-term and committed to a long-range vision of revitalizing the city he’s vowed to remain faithful to–what’s not to like? Well, the city doesn’t have a coffee shop, or a movie theater, or a bowling alley, but it does have a particularly large elephant residing in this Mon Valley room.

Immediately after taking office, in January, 2018, things “got real” with the Monessen city council. New Mayor Shorraw immediately spotted what he saw as “improprieties” with regard to how management of the city police pension fund was being conducted and responded by alerting the Pennsylvania state auditor general.

From there, it got real ugly, real fast. Shorraw details the council’s threats, attempts to force his resignation, and then impeachment. (Not sure that last one is really a thing.) The mayor responded by refusing to attend any council meetings for the next 20 months.

While Mayor Matt wasn’t at the official meetings, he didn’t stop, you know, mayoring. Shorraw was still out in the community and maintains that he was fully available, just a phone call or email away. Part of the ongoing work was authoring a series of essays, posted publicly on Medium.com, detailing a level of local government chicanery and sausage-making that most of us lay folk are never exposed to.

The seven-part (and counting) series, all under the title Fighting City Hall From Within, offers a brutally-frank, unfiltered insider’s view of city government–and the corrupt actions of its members–the likes of which you’re unlikely to see anywhere. The posts are thick with first-hand details and Shorraw is not afraid to name names–of council members, legal entities, business partners, and the like.

You *can* fight city hall … if you’re the mayor. Monessen mayor Matthew Shorraw in front of the old Monessen Municipal Building.

Now, your author is not a constituent of Shorraw’s, so he has no “skin in the game,” as they say. But I can imagine a very strong two-sided reaction to this whole thing if I were. On the one hand, it is incredibly refreshing to see a young, inexperienced politician come into an old-boys we’ve always done it this way environment and both start asking hard questions and then actually do something when he sees real governmental corruption. In this case, report it to the authorities and let the citizens know what’s going on.

On the other hand, you just can’t walk away from the office and expect to either affect change or earn the trust of your constituents. “Eighty percent of life is showing up,” they say, and it’s really hard to imagine anything in that elaborate city plan getting done from the couch at Chez Shorraw.

That absence ended dramatically the week before last as Shorraw returned to a calamitous city council meeting that included the abrupt firing of the city administrator and solicitor. The proceedings, in front of a standing-room-only crowd, devolved into a gavel-banging group shouting match. “I had to scream or nothing would get done,” Shorraw says. You can YouTube the whole thing if you’ve got the stomach for it. “I’m back. For good.” Shorraw told us.

Let’s hope that’s true. There are a whole lot of reasons why The Orbit makes the hour-long drive down to the Mon Valley again and again. As an outsider, it’s an incredible place full of lovely people, deep, important history, terrific old-world culture, and a brutal, tragic beauty. We’ll add that’s it’s also got some of the best pizza on the planet–well worth the trip for that reason alone. We wish the absolute best for Monessen (and its sister Mon Valley ex-steel towns) and really just hope that everyone can find a way to get along.

5 thoughts on “Something Dramatic: The Orbit Interview with Monessen Mayor Matt Shorraw”