The unusual roofline, viewed from either end, has the perfect semi-circular curves of a series of long sheets of paper, each arched gracefully to bend back in on itself. Across the front of the big building are evenly-spaced openings echoing the same design motif. The big spaces are filled with aluminum grids and stained glass windows that echo the fantastically frenetic line drawings of Ben Shahn or Paul Klee.

In fact, one can imagine the entire structure modeled in miniature, constructed from simple cardboard tubes, thick paper stock, and colored gels. You can almost see the architects–’50s beatnik-meets-big city corporate; all cigarette ash, turtlenecks, and horn rims–as they talk the wary customer through an unexpected design laid out before them in the firm’s big conference room. 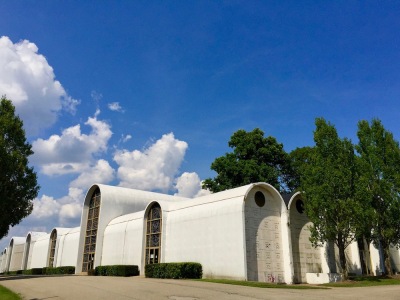 Appearing like a retro-futuristic science-fiction film set, the mausoleum at Penn Lincoln Memorial Park rests atop a gentle hill along Route 30, east of Pittsburgh. Driving by–one would have no good reason to walk or bicycle this stretch of highway–it may not even be obvious what you’re seeing as the big building flashes past the driver’s side window at 45 MPH.

An industrial R&D laboratory? Experimental school? A sneaker preacher’s mega-church? Heck, maybe even some crackpot millionaire’s attempt at an ex-urban Utopia. Any of these seem as plausible as something this designy winding up as an “above-ground burial” for Westmoreland County’s deceased moderne.

CMS East, Inc., the parent company that owns Penn Lincoln Memorial Park, along with 22 other cemeteries across five states, declined to provide The Orbit with any information on the architect who designed the mausoleum or any history of the design. CMS didn’t even respond to our request so it’s safe to say we do not recommend having any organization this rude turn your lifeless body to cinder!

The Google Machine offers no more information, so we’re left to wonder and speculate. 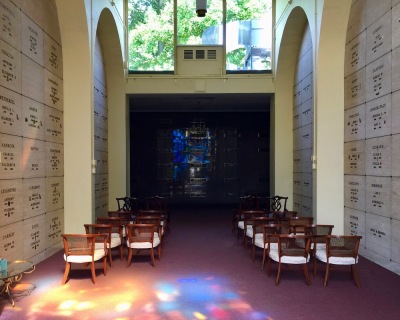 And that’s a shame. Not the wonder part, mind you, but the complete lack of recognition this remarkable construction seems to have received.

I’m no architect, but the artful curved concrete pours, the clean lines with no square corners, and the New Age yoga camp-meets-abandoned spaceport atmosphere all feel like ample source material for some academic’s Ph.D. thesis or a full-color spread in a glossy design magazine. At the very minimum, it’s worth pulling over to take a walk around the next time you’re headed east, toward Jeannette or Greensburg.

Most of metro Pittsburgh was constructed in a relatively short period of the city’s great industrial build-up–say, from the 1880s to the start of the Great Depression. So the prevailing design heritage here is curlicued Victorian filigree and blunt worker efficiency. The modernism of mid-century American design–so prevalent in breezy West Coast cities and Sun Belt oases–largely passed us by.

But the lovely mausoleum at Penn Lincoln Memorial Park reminds us that the brilliant ambition of post-war America extended everywhere–to gasoline stations and dry cleaners, ice cream stands and car dealerships. It even came out here, to the distant suburbs of Pittsburgh, as a place one might entomb their loved-ones forever … in the future.

Getting there: Penn Lincoln Memorial Park is on Rt. 30, half way between East McKeesport and North Huntingdon. It’s about a half hour’s drive from downtown Pittsburgh.