There she is: perhaps the most famous character the Brothers Grimm brought to world. Most of us came to her doe-eyed, perfectly-behaved acquaintance care of Walt Disney Studio’s classic animated film.

Only here the princess is no angel. She’s accessorized in rock-and-roll sunglasses and huffing a cloud of gray smoke through a makeshift pipe. It’s a scene that would leave Cheech and/or Chong gasping for fresh air. The crudely-painted artwork is titled Snow White Smoking Weed from an Apple.

Through the years, we’ve seen Art All Night grow up. We were there when the very literal all-night, anything-goes community event masquerading as art show learned to crawl, built its first set of plywood S panels, and went from a four-month planning cycle to an incredibly-efficient four-week execution. [Full disclosure: this author was neck-deep in volunteering for Art All Night for at least ten years; this year he just pulled a late-night, keep-your-eyes-open shift.]

So it is with strange comfort that we see this onetime oddball event grow up to be the same kind of goofball grass-roots institution we might have hoped for. The longevity of this all-volunteer event–last weekend was its 22nd yearly happening–and the continued commitment to no jury / no fee / no censorship is about as resolutely pure and accurate as one could hope from an organizational constitution.

There are a few other nos we could tack onto the Art All Night credo: no curation, no restraint, and no questions asked. These are, of course, 100% in the spirit of the event and give it a great I don’t need your rules / stick it to the man vibe–but that can present its own set of challenges for both participant and spectator.

Like being the introvert at a raucous New Year’s Eve gala or a vegetarian at a pig roast, the more subtle artworks are absolutely invited and welcome to be there, but may have a hard time feeling like they came to the right party. 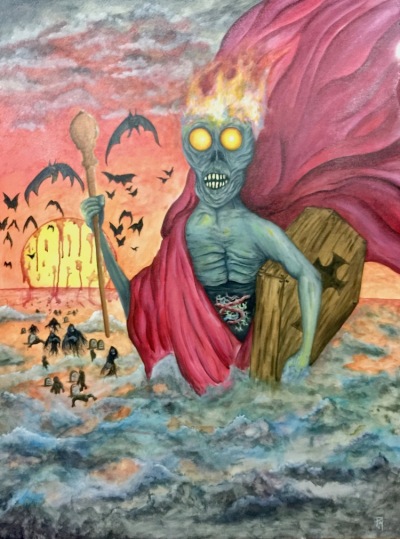 Exhibition at Art All Night favors big and loud, jokey and profane–that’s just the reality of an environment where the hanging is a shotgun blast of random collisions on dull fiberboard. There’s no way a sensitive portrait in graphite, delicate fabric embroidery, or miniature collage can compete side-to-side with a painting like The Red Death (above). That three-foot acrylic-on-canvas fantasy by artist Petey Miceli stars a giant demon-creature in flowing red cloak walking through turbulent seas with an enormous coffin under his arm.

Steven Walker’s untitled mixed media (self?) portrait of a young man staring straight back at the viewer (above) features actual barbed wire looped around the painting and a molded plastic eyeball exploding through the canvas in a gruesome bloody mess. It’s a lot to take in.

Ditto that for Universally fucked (below)–a kind of stoned joke come to life in the form of an orgasmic scary clown rogering a duck against a backdrop of the swirling psychedelic cosmos. There are elements of Jeannine Weber’s pen/pencil/acrylic artwork that I like–but I’m not going to hang this in the living room.

Kathie Hollingshead’s Peep All Night (below) takes the created-for-the-occasion approach to a whole new level. As one of the organizers of the event, her insiders-view recreation of Art All Night in miniature–with leftover Easter peeps standing in for attendees and volunteers–is a kind of meta joke-within-a-joke that blew this blogger’s already fragile noggin.

The piece–complete with faithful models of the plywood exhibition panels in cardboard and popsicle sticks–has so many great nods to Art All Nights past that we really have to salute this as some kind of high-water mark in art history. The tiny Etch-a-Sketch? The little Three Sisters bridge photo? Portraits of peeps? If you’ve been to Art All Night–any Art All Night–you’ll recognize these tropes. That’s it, man–game over.

There’s long been a debate in Art All Night’s inner circles as to whether the work of younger artists should be segregated into a safe zone. The proponents argue that this way junior’s finger painting doesn’t end up hanging next to something really offensive; those opposed feel like it puts the kids in the often looked-over ghetto of “children’s art.”

Personally, I love to be surprised when the piece that pops out from a full panel has Age: 14 (or whatever) on the info tag. But I’m not a parent and don’t have to answer not-ready-for-it-yet questions like “why is that man doing that to that lady?”

Regardless, the under-18 panels always yield great stuff–too much to include here–but we loved Faith Little’s Daniel Ceaser, a mixed-media bas-relief in cut cardboard with stray scattered phrases like “Japanese Denim,” “Death & Taxes,” and “Street Car” that must be meaningful…but we can’t make the connection.

As always, Art All Night is a place for some folks to, as Mrs. The Orbit says, “get their freak on.” From the days of The Rubber Men, The Cardboard Cowboy, and Sailor John Art All Night always brings out a who’s-who of where are these people the rest of the year?

The event has been around long enough for some of these folks to now be exhibiting in the great gallery in the sky. Rest assured, there’s a new crew of regulars–that guy with the electric blinking lights fuzzy jacket, Most Wanted’s crushed art cars, too many costumed characters to name, a naked lady!

We also enjoyed this too-late-for-the-party-but-I’m-showing-up-anyway tribute collage to the Golden Girls (below) which appears to just be a drop-off/leave-behind. We don’t know what Blanche, Rose, Sophia and the gang would have thought about Art All Night, but they’d be welcome here too. 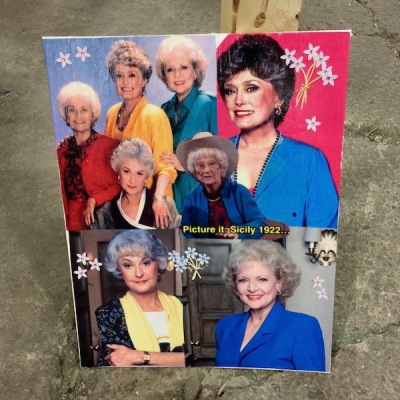 They’re not the only ones. If Art All Night teaches us anything, it’s that the human spirit to create, delight, surprise, and humor is deep and wide, strong and alive. That behind every row house awning and within every apartment bedroom there may be an artist, paintbrush in hand, shoving a fake bloody eyeball through a canvas just because he or she wanted to communicate…something…to the world.

lildoodoobutt, the artist behind the Snow White piece, would likely have a hard time finding gallery sponsorship elsewhere. We might assume the same for the vast majority of Art All Night contributing artists. That said, Ma and Pa doodoobutt can rest assured their kid will always have a home at Art All Night. 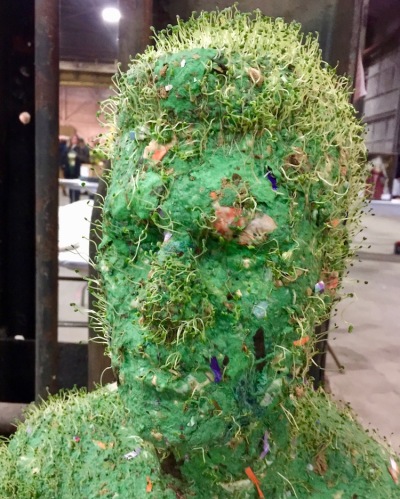