Let’s get something straight: the stereotypes are all basically true. Young people–tattooed, time-warped, and tricked-out–cavort at each neighborhood’s stock of ethnic-inspired food trucks and to-the-point microbreweries. Seemingly every home comes equipped with a strand of Tibetan prayer flags or a Black Lives Matter window sign. [Whether or not you’ll actually encounter any black lives is another matter.] The “Rose City” is aglow with its totem flower–albeit often shriveled and water-starved in the sun-baked late summer drought. Everything is “locally sourced.”

Portland, Oregon. Like Austin and Seattle in the ’90s–or Brooklyn a decade later–it is the current generation of twenty-somethings’ hip organic indie destination-du-jour…and that makes a lot of sense. There are a ton of things to do, inside and out. Every flavor of culinary and sensory offering is available just a Square-swipe or Subaru sidle away. There’s just enough grit (if you look hard enough) to locate the handful of still-remaining rough edges from the city’s industrial past, but with the outsized young/white/educated/leftie population to feel more like a giant college town where everybody plays in a band, jams for the roller derby squad, and works part-time at the coffee shop while working on their novel.

We went to Portland to hang out with friends, ride a bicycle around the city, see the big rocks on the coast and the lovely waterfalls in the gorge. We did all that (thank you, again, most generous hosts and tour guides!) but also had the terrific experience that all travel should reward us with: the perspective on what is–and what could be–back home. 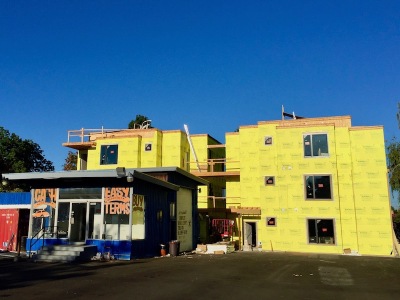 This, of course, is the Pittsburgh Orbit. So we’re not so interested in creating a travel piece for a city 2500 miles away. Plenty of that hype has been generated already. So much so that Portland has some very opposite problems from Pittsburgh: skyrocketing housing prices, the “damn Californians” pouring into the city, and a not-too-successful campaign to Stop Demolishing Portland! (to construct hated condos).

There were a whole bunch of things we liked–the number of old junkers parked on the streets, all the great craftsman architecture, gardening nuts planting their front yards, “zombie RVs”, some great street art, and, yes, the food cart “pods” and ubiquitous microbreweries. That said, we’re more interested in just a few really basic city things that impressed us in the trip and how we’d like to see some of these emulated back here, in Pittsburgh.

To call Portland Nirvana on two wheels is a stretch–it’s just too flat and too gridded for that. But, it’s absolutely heaven for the commuter or basic point-to-point traveler. There is an unbelievable amount of infrastructure in place nearly everywhere in the city–well-marked bicycle lanes, directional and distance signage every few blocks, dedicated street-crossing and curb cuts, and the concept of “neighborhood greenways”: dedicated streets that prioritize through-routes for cyclists and pedestrians. Further, motorists have a great deal of respect for bicycle-riders and the two seem to co-exist very comfortably.

North Williams Avenue–running from the central East Side up to North Portland–resembled a full-on cycling highway with non-stop two-wheel traffic every time we headed home. Plus, since the majority of the city is basically flat[1], you can ride all day and never get tired[2]. Throw in a climate that rarely gets hot enough for you to sweat and even less often do riders have to deal with snow and ice, and you’ve really got no excuse for not living on two wheels. 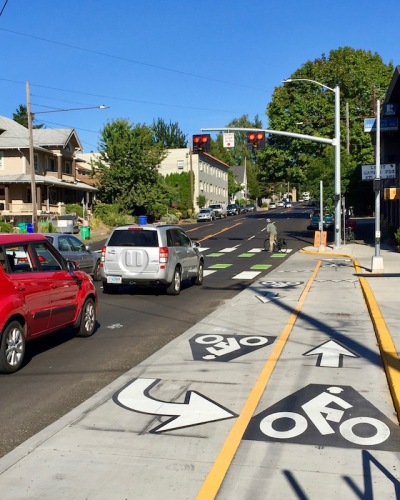 We can’t do anything about our climate, but Pittsburgh has come a long way in its bicycle-friendliness in the last ten years. [Thank you, Mayor Peduto/Bike Pittsburgh!] We’re gaining new bicycle lanes all the time, have a terrific advocacy community, lots of hardcore riders, and are finally working out the nightmare of traveling through central Oakland on a bike. I think we (Pittsburgh) may actually have a better trail system than Portland within the city [it’s also entirely likely we just didn’t get to see Portland’s trails], but it’s limited to the riverfronts and a couple other through-passages.

All that said–as we’ve written in these virtual pages before–cyclists are still second-class citizens in Pittsburgh who all too often have a combative relationship with motorists and councilwoman Darlene Harris. It was remarkable to see how good it could be. We’ve got some major room to improve here. 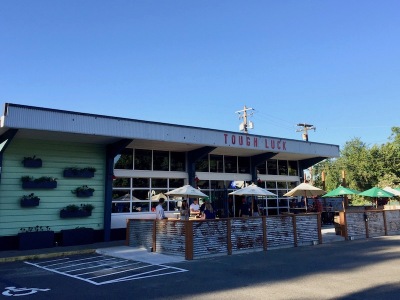 Tough Luck, a months-old bar and restaurant in NE Portland, is housed in a 1960s-era building that probably started life as a garage, or a laundromat, or maybe a dry cleaners–it really doesn’t matter. It was an underwhelming little big box design to begin with. But with some imagination, tasteful rehab, and the conversion of a half-dozen parking spots into relaxed outdoor seating, it’s aged gracefully as a terrific little addition to the Woodlawn neighborhood.

That story–the adaptive reuse of one aesthetically-challenged building or discarded vacant lot into something useful, vibrant, welcoming, and fun was something we saw all over the city in a ton of different impressive ways–a used car lot turned outdoor dining park, cinderblock workshop-to-brewery, old social hall to new performance space. 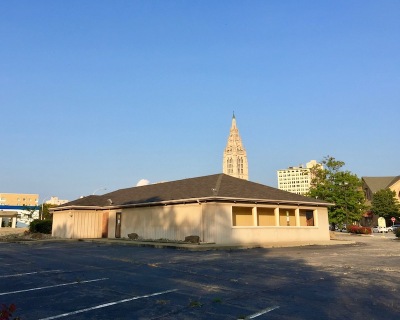 There is a former Pizza Hut that’s been sitting vacant for years in Pittsburgh’s East Liberty neighborhood. This is nothing remarkable–we’ve got empty buildings all over the place. But the fact that it’s a hundred yards from Duolingo’s headquarters on Penn Ave. and maybe a half mile from Google’s big Pittsburgh office is. Right now–for good or bad–there is a lot of money flowing through this part of town. That this runty little shack sits idle is a shame. The building itself is nothing special, but its location and the vast city lot it sits on sure are.

In Pittsburgh, it can really feel like all the nice design and construction happened by the 1920s. We are fortunate to still have a lot of that stuff. But if there’s something of the vintage of Tough Luck or Pizza Hut–and there are plenty in and around–probably no one cares and it will sit there until the roof caves in or someone knocks it down for another parking lot. We’d love to see entrepreneurs take up the challenge of turning some of the city’s many architectural eyesores and discarded structures into welcoming, creative uses of fallow ground. 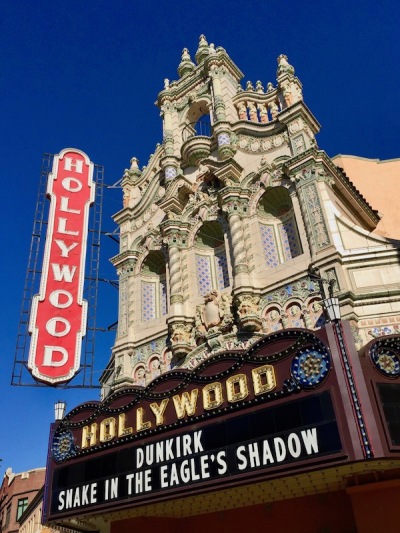 Hollywood Theater: one of many terrific neighborhood movie houses in Portland

Lastly, I’ll say that I was totally jealous of how every neighborhood seemed to have its own healthy business district, amazingly each supporting both a record store and still-operational movie house to go with the requisite cutsie retail, restaurants, bars, and coffee shops.

This is likely an effect of that thing most cities have where there are actually more people living there than there were sixty years ago[3]. Sometimes humanity can be a real pain the ass, but it certainly makes it easier to populate the storefronts of Main Street.

To pass through [Pittsburgh city neighborhoods] Perry Hilltop, Spring Garden, Morningside, Uptown, parts of the Hill District, etc. and see the obvious former business districts that are currently somewhere between under-utilized and totally vacant is a real bummer. Oh! to bring back the New Grenada Theater or a real grocery in Homewood or anything on Observatory Hill. Sigh.

Next up: It was a nice place to visit–and under different circumstances, we could see the appeal of living there–but coming home pointed out so many things that we love about Pittsburgh. We’ll look at those comparisons next week.

[1] Portlanders: by contrast, a huge amount of Pittsburgh looks like the hilly area just above your downtown. Here, it’s nearly impossible to avoid hill climbs unless you stick entirely to the river trails–and even then you still have to get home.
[2] The positive spin on this is that every bicycle ride is both a commute and a trip to the gym.
[3] While the greater region has grown, the city of Pittsburgh has been losing population ever since 1950, when it was more than twice its current size. [Source: https://en.wikipedia.org/wiki/Pittsburgh#Demographics]