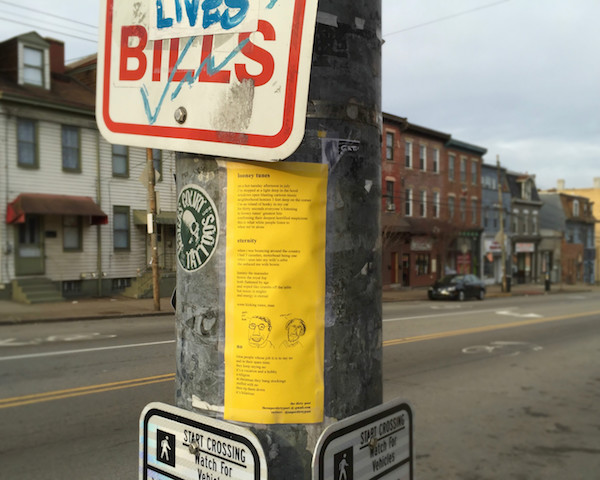 In the wild: The Dirty Poet’s work where most people experience it

You’ve seen his work. At least, you have if you’ve loitered around any less-than-respectable tavern, coffee shop, or music venue in Pittsburgh’s East End over the last decade.

Xeroxed in small batches–usually two or three bite-sized poems at at time–cut down to vertical half pages, and taped to light poles, left on bulletin boards, and passed hand-to-hand (if you know who to talk to), The Dirty Poet is an old-school bard of the boroughs, a tale-teller of the tarmac. Like the clergyman preaching to drunkards on Skid Row, The Dirty Poet takes the mountain to Mohammed with that very deliberate pre-Internet mass communication, the flyer and handbill.

The Dirty Poet: his head is always in a book

The Dirty Poet, who spoke with Pittsburgh Orbit on condition of anonymity, claims he is the best read poet in Pittsburgh. Admittedly, this is probably not a high bar, but it would be difficult to name any competition for this title*. “People read these poems that would never read any other poetry,” says The Dirty Poet, and he’s right.

The work is taken out of the English department, out of the bookstores and coffee shop readings, hell, you don’t even have to enter a building–it’s right there on the sidewalk. One needn’t have a college degree or even a library card. [Spoiler alert: you do need to be able to read.] By taking the poems directly to the streets, taped up on light poles, it’s as populist and mass accessible as it could be. Whether he’s reaching people hungry for an unslaked thirst for verse or just bored and waiting for the bus, they’re all [OK, some of them] joining the revival in this tent. 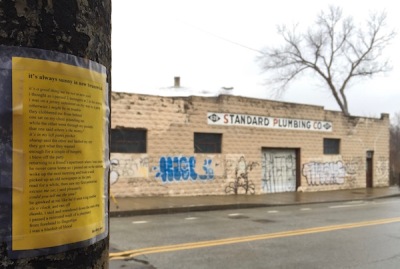 The Dirty Poet has also been at this a long time. Writing his whole life, he began the practice of pairing his Xeroxed literature with the other gig flyers, ads for weight loss studies, and rock band stickers that litter the street some fifteen years ago. That’s more time than most poets have cumulatively spent in grad school, getting rejected by literary journals, and giving up writing entirely.

In our conversation, El Dirtero spoke with obvious pride about the many chance meetings he’s had with readers as he’s plied his trade on the pavement. “Guys in their twenties come up to me and tell me they’ve been reading me since they were teenagers,” the Dirty One says, “I think I speak to a universal feeling of alienation.”

But what of the poetry itself? It’s loose, personal, true, vulgar, cynical, sly, smart-alecky, profane, and, yes, possibly (but not usually) dirty. It also doesn’t rhyme and it’s definitely not for everyone. “I write poetry to process my experience,” the Soapless Shakespeare tells us. Subject matter ranges from the topical (politics, gun violence, race relations) to observational (hypocrites of all faiths and isms, technology dependence, media and mass culture) to many personal anecdotes of characters and experiences throughout his life. The Great Unwashed assures us these are all true. 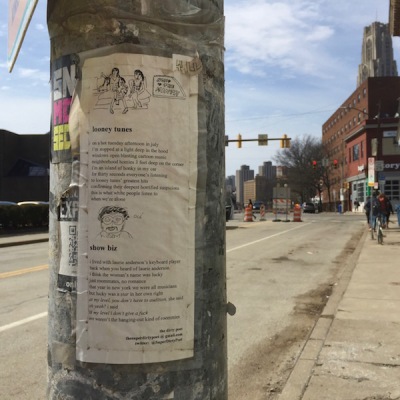 One final note: Pittsburgh Orbit was planning to reprint a couple of The Dirty Poet’s pieces here, but in the spirit of his work, we thought it only made sense to urge our readers to take the time, step outside, and check out the poetry where it lives, right on the streets of Pittsburgh. If you don’t see it, you’re not trying very hard. And if you don’t live around here, well, this is just one more reason to come pay us a visit**. The Dirty Poet will still be at it when you do.

* Billy Nardozzi, the “Chaucer of the Classifieds,” seems like the only legitimate competition for this title, but when you get into pay-to-play territory, the water gets muddied pretty quick.

** Those looking for a more substantial collection of The Dirty Poet’s work can find the collection Emergency Room Wrestling on Words Like Kudzu Press.

2 thoughts on “Street Beat: Who is the Dirty Poet?”