Statistics, man. People get a computer and suddenly everybody cares about their numbers. Phooey.

It is the final days of 2015 and ’tis the season for geese-a-laying–not to mention year-end lists-a-making. We decided to finally peek at The Orbit‘s digits and find out what people were checking out (and not checking out) and turn that insight into a little two-part year-in-review on what happened over (most of) the last twelve months.

To talk about actual numbers would be truly pathetic, so we’ll generalize here. In Part 1 we’re looking at the ten most popular Orbit blog posts for 2015, based on WordPress site statistics for individual post-views. We’ll follow-up on Wednesday with staff picks of some of the more, ahem, under-appreciated stories from the year.

People love the steps! That is totally gratifying! Years ago, this urban hiker’s first attempt at blogging was going to be a site entirely devoted to mapping, photographing, and yes, blogging about Pittsburgh’s 750-ish sets of city steps. That fine plan, just like Cop Rock, fizzled all too quickly–and it probably deserved to. The steps are great, but there’s just not enough to go on about for a new story every week.

But at Pittsburgh Orbit we’re able to include some good city step stories without (we hope) having to dredge the river. These seemed to make their way out into Pittsburgh’s bicycle and pedestrian communities and two of them turned up in the top reads of the year, so that suggests the people are with us on this one. The Orbit‘s #1 story for 2015 is about Rising Main Way, the longest set of city steps in Pittsburgh, and one of the longest sets of urban steps in the country.

2. You Ain’t Seen Nothing Yetta: The Mosaic Houses of Spring Hill (June 3)

Every man, woman, and child–not to mention gopher, raccoon, and honey bee–in Spring Hill seems to have dialed-in The Orbit to read this story on the terrific little set of old-school wood frame Victorian houses with custom mosaics embedded in their Yetta Street foundations.

We can only assume that artist Linda Wallen has a lot more friends than this blogger does. It’s her mosaics that decorate the Yetta Street houses–as well as other infrastructure–in Spring Hill. On our (long) list of to-dos is to get back there and find out what she’s up to for next year. 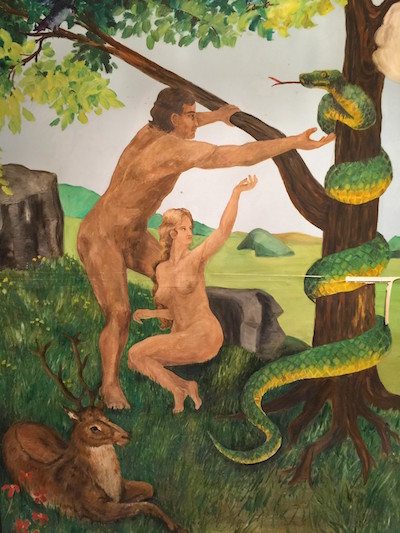 The true tale of mystery couple Arthur and Alfreda Antignani proved to be a big draw for those, like The Orbit, that first discovered them via the over-the-top posthumous sale of their North Hills estate. The Antignanis lived large–and loud–in a shag-carpeted, gilt, mirrored, leopard printed, tchotchke-bedecked, and go-go mannequin-inhabited Bacchanalian suburban pleasure palace that would have made Elvis blush. Take a last look here. 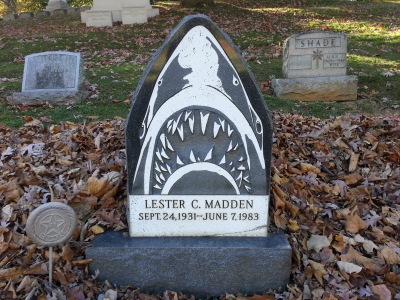 A tip for our fellow bloggers: if you want to up your visitor rate, start posting about something you can legitimately tag with #jaws or #sharkweek. The story of Lester C. “The Shark Grave” Madden’s Jaws-shaped grave marker turned into a feeding frenzy for the “fin freaks” who ate up this story like a great white hopped-up on chum, eyeing a bonfire’s worth of Martha’s Vineyard teenagers. And just like big teeth, they never seem to get enough (and ol’ Quint ain’t around stick ’em this time).

Chris Fischer has been pressing the Record and Play buttons while cassette spools roll and mailing the results out in manilla envelopes for a couple decades now (he started young). Along the way, he’s encouraged, promoted, and influenced a generation of guitar-wielding scratchy folk…like…ish lads and lasses to lay their souls down on magnetic tape and black plastic. We sat down with him and talked about Unread Records’ epic recent Public Coffin release.

More city steps! The intersection of Romeo and Frazier Streets in South Oakland features a street lamp, road signs, two sets of city steps, and a whole bunch of trees, vines, and weeds (but no cars). The Orbit opines on the nature of what makes a “street,” the changing utility and value of city steps, and casts some serious aspersions on how much rope may be skipped at a house with Tibetan prayer flags hanging on the front porch. 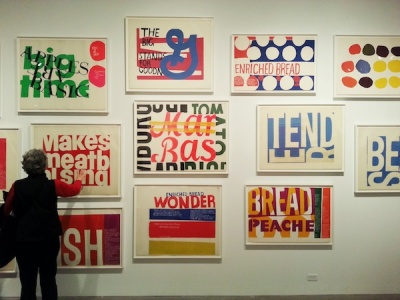 Sister Corita Kent, the radical art nun whose big tent quasi-religious messages questioning war and materialism via pop-art product manipulation and screen printing has very little to do with Pittsburgh except that The Andy Warhol Museum hosted an absolutely terrific career-spanning show of her work early in the year. We checked it out on the opening night, raved about it, and (we can only assume) The Warhol’s re-postings ended up sending a lot of people into Orbit. 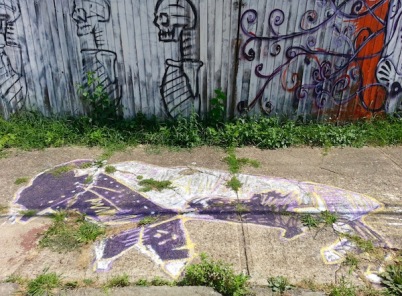 This summer, Jeremy Reymer painted a series of buffalos on the sidewalks around the front and side of his Lawrenceville home. Before we could even run a story about the proud creatures, they were gone with the power-washing force of the city’s Graffiti Busters unit. This Orbit obit laments the loss of this fine collection of street art and muses about why the neighbors would have been offended enough to call it in, as well as the not so simple philosophical question what is graffiti?

That’s pretty much what this one is about: the very rare sight of a street made entirely of wooden blocks (plus us winging about having been scooped by local public radio). It’s the last wooden street in Pittsburgh and one of the last handful in the United States. Roslyn Place is also right off Ellsworth Ave. in Shadyside. So, if you’re like this blogger, you’ve probably been within feet of it (or, at least, driven past it) many times without ever knowing it was there or stopping to check it out. Here’s another chance to make that right.

One tiny red castle, complete with a helipad and Mexican flag, mounted high on a brick wall in an alley in The Strip District. We’re not sure what it’s about or who came up with it, but a whole lot of people e-stopped by to check it out. It’s still there (although predictably weathered since this story ran in May), so, you know, get down there and check it out while you can.

Check back on Wednesday for The Orbit’s 2015 year-in-review, part 2: “The Sleepers.”