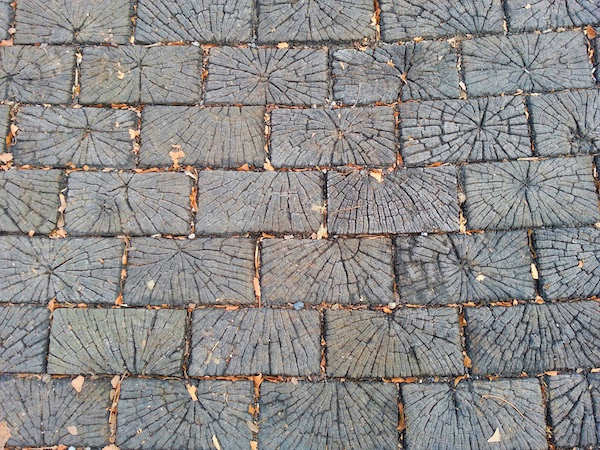 From even very close, you’d swear they were bricks–or maybe cobblestone, but they’re a little too flat for that. No, tiny Roslyn Place in Shadyside is paved (it turns out that is the right word) with wood. Tightly packed, up on their ends for strength and wear, smooth and even.

This blogger has ridden a bicycle on plenty of streets bricked (to varying degrees of comfort) and cobbled (Hell on earth for the cyclist) and I can say that Roslyn’s wood blocks were a more pleasurable experience than either of those options. That may owe a lot to the fact that Roslyn Place is only one block long and dead-ends in a tiny cul-de-sac, so it doesn’t endure the kind of heavy through-traffic other roads receive, but it’s still impressive. 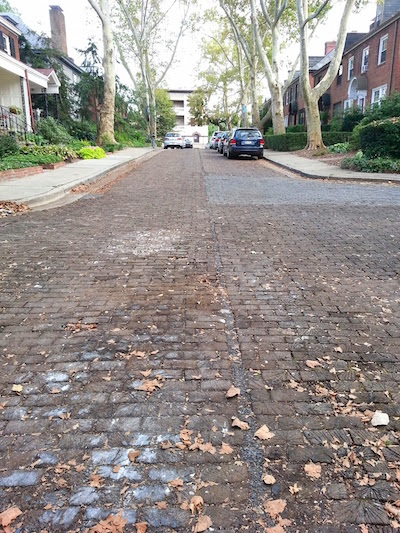 Looking up from the end of Roslyn Place

The technique is known as Nicholson paving and it goes back hundreds of years, but seems to have peaked in the early 19th century. Though it’s impossible to get any kind of comprehensive list, it’s clear that the number of remaining wooden streets in America is very low. There are mentions of similar single block-long Nicolson pavement streets in Philadelphia, Cleveland, and St. Louis, plus at least three alleys in Chicago. But that seems to be all the Internet is aware of, making Roslyn Place a member of a very small club.

The Orbit does not like to get scooped. We did not become the nation’s most-trusted news source by getting our information second-hand. That said, we give credit where credit’s due. And in this case the story of Pittsburgh’s last wooden street came to us from Margaret Krauss’ report on WESA earlier this Summer. That piece does a very good job describing the 100-year history of the street and its single full-scale rehab in 1985. Readers are encouraged to go straight to the source for those details*.

Houses at the end of Roslyn Place

The fact that we had to hear about the wooden street from a public radio report is particularly galling when you know the location. Roslyn connects to Ellsworth Avenue and is a short block from Aiken–a corner that I’ve probably passed a thousand times, never peeking down the side street. If that isn’t an Orbit cautionary tale on observation and exploration of your immediate surroundings, I don’t know what it is. 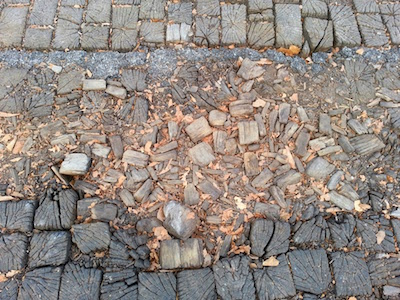 Wood chips: thirty years later and only one pot hole on the street

* The Post-Gazette and City Paper have both written pieces about Roslyn Place as well.  I just either didn’t catch on or don’t remember those.

One thought on “A Wooden Street!”