On this grayest of days, in the midst of the most miserable of months, even the hardest of core ice-in-his-veins bloggers is tempted to just stay holed-up inside with his hot coffee, British crime dramas, and cauldron of thick stew.

But no!  Not with beautiful flowers blooming a mere two blocks from Chez Orbit.  Flowers?  In February?  In Pittsburgh?  Indeed!  Possibly (or maybe not) coinciding with this most contrived of holidays, the miracle workers of the Fiberarts Guild of Pittsburgh have created their first test installation of the Pop des Fleurs project at Arsenal Park, in Lawrenceville.

The Fiberarts Guild were the masterminds behind 2013’s incredible Knit the Bridge project which brought together tons of volunteer knitters of all types from all over the county to ultimately cover the Andy Warhol (nee 7th Street) Bridge in knit and crocheted panels.

Pop des Fleurs has similar goal of taking fiber arts to public spaces, but with the very deliberate timing of bringing bright color to the outdoors in deep bleak winter.  The project team is looking for makers to create the flowers either on their own or in a number of public workshops and events.

The test installation will be up for just three more weeks (through March 8).  Find a cold, snowy day and get your keister over to the park for a blast of magic. 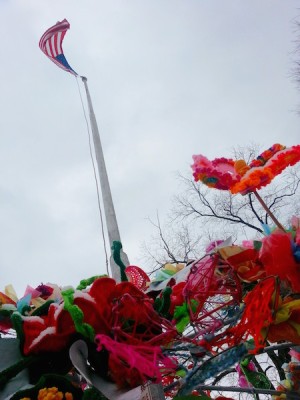 One thought on “Flowers in February”