The intrepid cityscape blogger walks everywhere, even if he or she is just getting started in this game.  There’s just no other way to have one’s ear to the ground without keeping his or her feet on the ground (or something like that).

The walk from Lawrenceville to Oakland usually passes through Bloomfield, by way of the Millvale Street Bridge, but on the alternate route up and over the Bloomfield Bridge one gets to pass through the long stretch of Bigelow Blvd. at the northwest corner of Oakland: Zarra’s Italian restaurant, some new hotel, and The Royal York apartments (former home of Lord and Lady Lagrosa).

Out in front of The Royal York stands an old stone wall, hip high, with a curious assortment of graffiti, executed in chewing gum.  I’ve been following these expressions for the last several years.

There are a couple really interesting things about this particular strain of graffiti.  For one, it’s a really slow burn: it plays out over weeks, one stretch of gum at a time, rather than the more immediate gratification of spray paint “bombers” who get in and get out (seemingly) without time.  Second, what is this (gender neutral) guy going after?  Matson?  Who the hell is Matson? 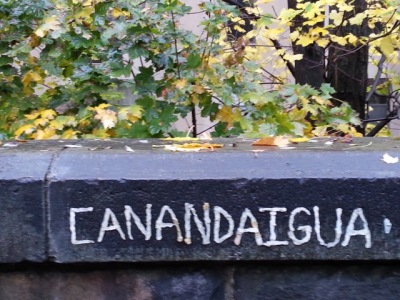 Canandaigua?  I can Google with the best of them, and that particular search term turns up a small town in the Finger Lakes region of New York state, not far from Rochester.  The assailant’s home turf?  It seems like a possibility.  I like my home town just fine, but you’ll struggle to find me spelling out “Blacksburg” along any public surfaces, let along in chewing gum.

This would ultimately read “Go ‘Cuse”

Go Bills and Go ‘Cuse.  Finally something to work with.  Here, we’ve either got somebody who is crazy about the legislative process or a big fan of western New York state college/professional athletics.  Now, I can’t cotton to any version of the Buffalo Bills since their horrendous move to the red fielded, aerodynamic buffalo, but I empathize with their haven’t-been-good-since-the-Reagan years, astroturf-enduring fan base.  Hell, maybe they could go north and win a Grey Cup, like Baltimore.  If your team strategy is exporting missionaries to Steelers country with cases of Doublemint, hats off to you.