Ghost house: the imprinted silhouette of a structure that is no longer there on one that is.  They’re the last remnants of a structure that has been banished from this earth and they speak to the current property owner’s neglect for updating to hide what many would consider a cosmetic blemish.  The alternate explanation being that they may be a very reverent way to honor the former structure.  It is impossible to know the intent.

Pittsburgh has a lot of these, owing to the city’s history of many close-quartered row houses and houses directly abutting industry.  That, coupled with the massive loss of population in the 1970s and ’80s that left lots of vacant, derelict properties that were ultimately razed.

The ghost house photographed above is particularly amazing.  It’s right across the street from The Home Depot in East Liberty and makes a perfect outline of the former house, including front and rear porches, against the off-white painted brick wall of a much larger building.  The addition of the lush green weedy grass (this photo taken in summer) makes it all the more unreal 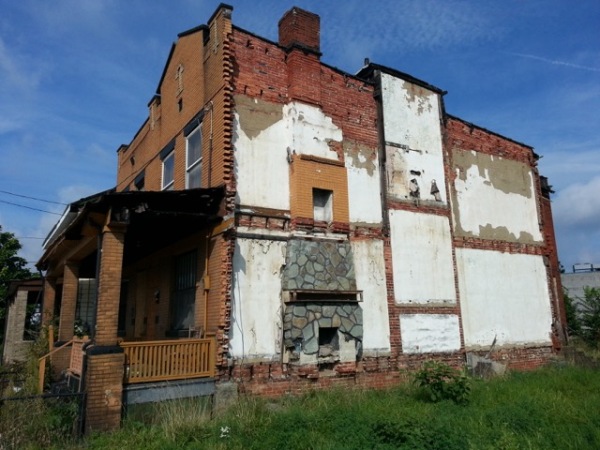 This is another one, also in East Liberty, with a weird variant on the theme.  In this case, the former house’s fireplaces–including the fake stone work on the first floor fireplace–and plaster walls have been preserved in the exterior wall of the still-standing house next door.  It boggles the mind that someone would tear down an entire house, and yet leave pieces of the razed structure embedded in the house next door.  Or maybe it’s structurally damaging to pry out something as integral as fireplace and chimney from abutting houses?  Either way, the outcome is strange, magical, and beautiful.