To paraphrase a well-trod cliché, if you build it, they will paint it black and gold.

What’s the point of owning your own diner, butcher shop, or martial arts studio if you can’t serve up those eggs and home fries or break lumber with your bare feet in a building faithfully decked-out in the home team colors? Firing the boss and doing what you want is the American dream! And just like those other local goals–one for the thumb, cracking open a six-pack, and, yes, stairway to seven–dreams really do come true*.

Today, for the start of the 2018 campaign, The Orbit salutes the über-fans who’ve gathered up brushes and tarps to decorate the façades of storefronts and residential exteriors in tribute to their favorite professional football team. Collectively, we’re calling these Steelers structures.

There are plenty of Steelers bars out there–pretty much every decent-sized American city has one (or more). Why, from Mugs ‘n Jugs in Clearwater, Florida to The Peanut Farm in Anchorage, Alaska, there will be no problem with Pittsburgh ex-pats catching the exploits of Antonio, Juju, and the gang any time soon. [There’s a semi-complete list up at SteerersBars.com.]

But if your local tavern runs the Steelers games on flat screen and imports a case of Iron City Beer for homesick fans, know they’re just doing the bare minimum. Real Steelers bars call to you from the street, wearing their own form of black-and-gold uniform or come bemuraled in crude renderings of trademark-safe generic football players frolicking on the gridiron. 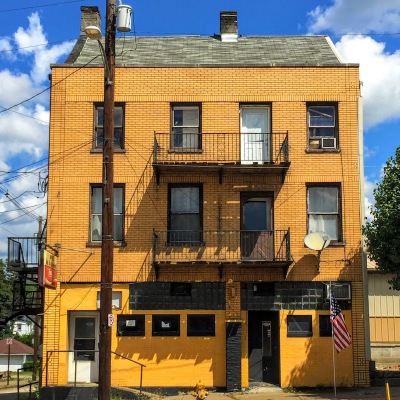 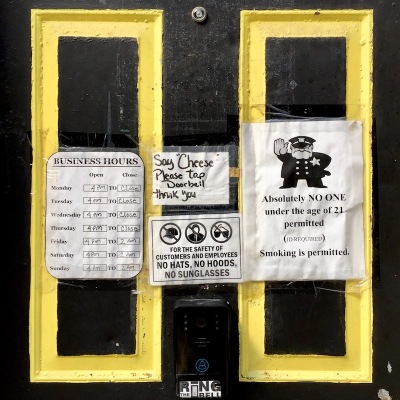 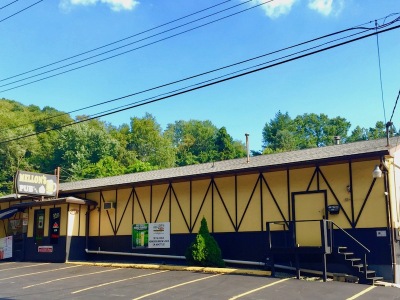 The fully-committed football fan doesn’t just enjoy a couple dozen games a year. No no no. He or she wants to live football–through the long, cold off season, the extended draft weekend, mini-camp, and boring preseason exhibitions.

One can literally inhabit the football lifestyle in a full-on Steelers house. Why fool around? Let’s go foundation-to-roofline in black-and-gold! The house will pop from the snow and bare trees in winter; in the fall, you’ll be conveniently camouflaged in your game-day jersey.

Not every homeowner is willing to go all-in on the black-and-gold, which leads to phenomena of the Steelers porch. This very much feels like a keep-the-peace compromise between one super fan and the rest of his or her (but who are we kidding? it’s probably his) family. That, or said supporter just didn’t want to do the hazardous second- and third-floor work on the extension ladder.

Either way, these awkward “business inside, party on the porch” houses get much respect…but probably not from the home decorati. 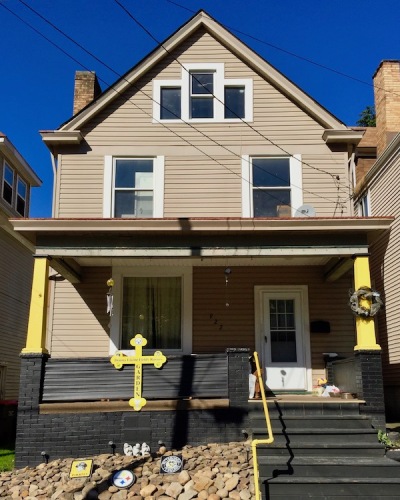 Ma won’t even let you paint the porch? Well, there’s still an opportunity for a Steelers garage out back or around the side. The industrious football fan  can decorate a two-car shed in a bye-week afternoon. (Or even more time if his buddies “help”.) There’s no ladder work involved and they’ll look great housing your Steelermobile. 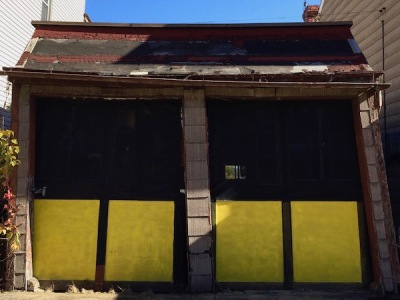 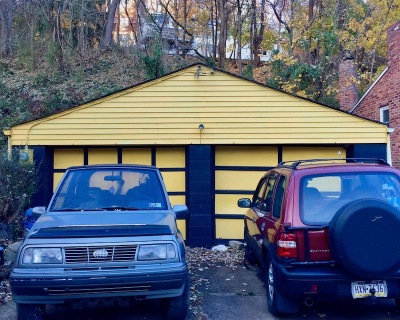 At this point, the casual Orbit reader may justifiably assume Steelers structures exist only in the spheres of retail storefronts, watering holes, and home improvement.

And you’d be wrong again! Make no mistake: you’ll have no problem locating the region’s favorite color scheme on factory buildings, car lots, and at least one (former) secret society. 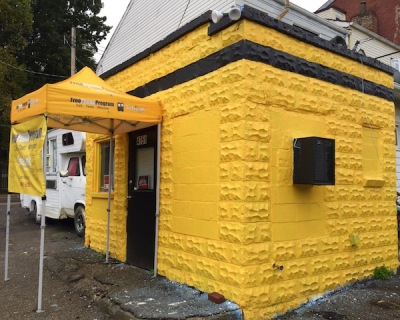 * No, a seventh Super Bowl win has not come to Pittsburgh…yet.