Monroeville Mall is largely populated—if suffering the same economic woes as many of its peers—and sits right there on a couple hundred acres of the eponymous suburb’s most automobile-oriented real estate. The shopping center hosts more than a hundred retail establishments, a separate adjunct strip mall, and has its own encircling beltway, just like the small city it is.

Wander to the far west end of Monroeville Mall’s upper level, right next to Hot Stone Massage, and there’s another storefront with the same extended wood and glass treatment you’ll see at Klexo’s Tattoo Studio or Smoke Wizard and Vape. From the mall’s wide walkway, it looks like yet another apparel and gift shop with its prominently-displayed t-shirts, hoodies, books, and novelties.

This one’s different, though. For eight dollars, a cashier will grant the curious entry to an unexpected collection of movie memorabilia and replica models, disfigured mannequins and The Maul of Fame, a singular wall of hand prints and signatures from various horror film demi-celebrities, each one blood red. This is The Living Dead Museum.

You’ve heard the term dead mall—heck, you heard it right here—but ain’t no dead mall like an undead mall and this one’s stocked with ghouls, zombies, and The Evil Dead.

George Romero—the Orson Welles of gore—came to Monroeville Mall late in 1977. He wasn’t there to do his Christmas shopping. That winter, he started filming Dawn of the Dead, the zombie apocalypse masterpiece and lineal descendant of his Night of the Living Dead, the mother-of-all undead movies.

From this history, Monroeville Mall holds a special place for horror film fans long before The Living Dead Museum. Its starring role in Dawn of the Dead makes the mall hallowed ground for gore buffs and the entire structure a kind of living museum all on its own. There’s even a brass bust of George Romero on the mall’s lower level, in front of Pittsburgh Locker Room by Lids, to celebrate it.

So The Living Dead Museum ended up at Monroeville Mall by no accident and it celebrates Dawn of the Dead every way it can. There are props from the original film and movie posters from both its American version and Zombi, producer Dario Argento’s separate cut of the same movie for the European market.

Your author is ashamed to admit he hasn’t seen most of the films celebrated in the displays at The Living Dead Museum. Why, I don’t even know The Evil Dead from The Evil Dead 2! So the giant rustic woodshed from the former was indistinguishable from the various window sashes, shutters, door jambs, and fake boulders of the latter. The significance of “prop-alike” tape recorders and calligraphy from The Necronomicon was lost on me—but I’m sure The Orbit’s gore-enthused readership would enjoy them all.

Monroeville Mall even gets its own snake-eating-its-tail tribute at The Living Dead Museum. There is a defunct/replaced elevator car and a section of escalator from the period when the movie was made. The gift shop sells tote bags and t-shirts with the mall’s original uber-mod MM logo, c. 1969—with and without blood spatter.

It’s entirely subjective of course, but The Living Dead Museum’s most exciting display is a large, hand-made model of sections of Monroeville Mall as it existed in the late 1970s. Presumably built in pre-production for the movie—there is sadly no documentation on who created the model or how it was used—the piece reads like an incredible work of folk art.

Created from poster board, balsa wood, repurposed bamboo placemats, and advertising photos, the model provides an exciting window into both what Monroeville Mall looked like in 1977—originally there was an ice rink, later replaced by the food court; Carlton’s Mens Shop included the faux street lamps of mall shops of that era—and how low-budget movie-making worked at the time. It’s hard to imagine the production designers for Jaws or Star Wars cutting pictures from a Sears catalog to propose set ideas … but, maybe?

Calling itself a museum is a little bit of a stretch. The Living Dead Museum has a number of really great artifacts, but I could imagine hardcore fans being disappointed by the limits of the collection. As with the mall model, the collection is extremely light on description of either the items presented or the films they came from.

The Night of the Living Dead room, for example, has plenty of promo stills, posters, and news clippings, but for actual objects from the movie, visitors get to see Sheriff McClelland’s ammo belt and some production lights used for scenes inside the farmhouse.

Many of the other displays include “prop-alikes.” I couldn’t find an official definition for this term, but I assume it means an object not used in a film, but one that looks just like the prop. There are quite a number of replica/recreation/tribute figures which are cool, but feel a little like the house that went all-in on Halloween.

All that said, for this horror noob, fair-weather fan, and general curiosity-seeker, The Living Dead Museum was a legit hoot. There is plenty to goo-ga over, even if you haven’t seen the movies the displays reference. It’s also a nice bite-sized experience that won’t wear you out, take up your whole afternoon, or break the bank.

The creators of The Living Dead Museum clearly put their blood and guts—and the blood of plenty others too—into an experience custom made for zombies, and those who love them. This Halloween season—or any season—we highly recommend a visit.

There’s cars in them thar hills. Looking up at the former hillside chop shop location.

It’s a truth among bloggers that if you haven’t had your “Geraldo moment” then, you know, welcome to amateur hour: you’re not really blogging, dude. This citizen-journalist/new media shaman (err…shamed man) is here to say he’s been through the eye of the needle and is back to tell the tale.

We certainly didn’t expect our Waterloo to arrive on a glorious sunny fall morning, the echoes of a classic Casey Kasem American Top 40 from ’72 still ringing in the ears. [What a great era when “Popcorn” by Hot Butter could chart! You try catching Moog-based instrumental proto-disco on “terrestrial radio” nowadays.] But there we were, on a pristine wooded hillside, high above Turtle Creek (the actual creek, not its namesake town). This post, its lack of sound and/or fury, may forever mark The Orbit’s Little Big Horn, our little corner of the blogosphere’s Mystery of Al Capone’s Vaults.

The first evidence: that looks like a whitewall to me!

The promise was spectacular and had Orbit written all over it: an untouched fifty-year-old automobile graveyard in about as improbably inaccessible a location as one could imagine–a thick wood up a steep hillside outside Monroeville. The junkyard had been abandoned for half a century leaving a rusting collection of stray Hudsons and Studebakers, Packards and DeSotos as far as the eye could see. Trees had grown up, over, and through the spent carcasses. Pickers and plunderers had pulled everything of value. Nature had reclaimed what she could. 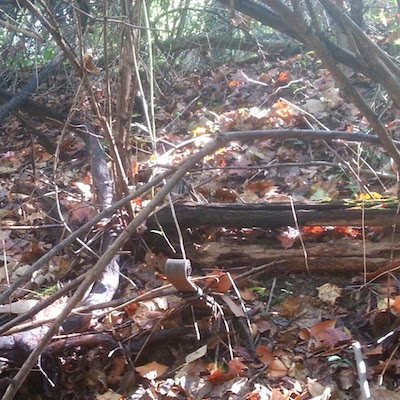 WOW! Sounds incredible, right? I know! So naturally The Orbit‘s dawn patrol caught the first suitable morning light to high tail it out The Parkway East  to meet our native guides, Moskal & Son. I’d been told that “We’ll have to take you there–you won’t be able to find this place yourself.” Truer words were never spoken. The journey involved one twisty-turny car ride, some combination of bridges, train tunnels, and one climb up a still-soaking-from-rain-the-night-before hillside.

The story goes that in the 1950s and ’60s an underworld operation existed that stole automobiles off the streets of Pittsburgh, drove them way out here to (pre-Squirrel Hill Tunnel/pre-suburbia) Monroeville/Wilkins Township, and somehow hoisted them all the way up the hill to this secluded location. There, this crew ran a woodland chop shop for the cars’ re-salable parts. At some point in the 1960s the location was discovered and the whole ring busted, crooks were sent to the big house, and their spoils were just left in the woods to rot. Pa Moskal had been to the site several times since the ’60s, but as a pair, father and son hadn’t been up the hill in twenty years–the younger but a wee Moskal at the time–so we’d have to do some tromping around to find the right spot.

Let me tell you something: if you want to see two grown Moskals and one still-figuring-things-out blogger brought to tears, just put them this deep in unspoiled nature. The three of us climbed, hiked, and trudged–hell, we located walking sticks and were on verge of singing mountain songs! How is one supposed to remember his or her troubles in this degree of mid-autumn pleasantness? The dappled sun streaming through the still-changing leaves; the only sounds, the chirping of birds and babbling of brooks. Very disheartening. 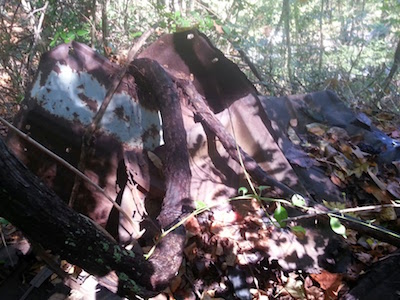 Well, we know it is darkest before the dawn and even at this moment of greatest despair, like Geraldo unearthing that alleged bathtub gin bottle, we tripped across our first evidence. It’s certainly not unusual to find discarded tires in the woods, but the whitewall that popped out was something that looked older than your garden-variety illegal dump site. It was followed by a distinct leaf spring–the kind found on the suspension of very early automobiles–protruding from a pile of downed foliage. Next: an unmistakable door panel with its window crank still attached. Just one giant rusted steel carcass appeared: itself so twisted, decomposed, and enwrapped in thick vine that its original shape was completely lost.

We never found the hundreds of car bodies we were hoping to see–they’re long gone–but at least we knew we had the right place.

So what happened to the acres of autos? Pa Moskal’s theory is that the railroad owns the land and cleaned it out when they put in the (newish) gravel access road we came across. I looked for a news story on a Monroeville-area illegal junkyard clean out some time in the last couple decades, but came up with nothing.

In the end, maybe it doesn’t matter. Geraldo never found any buried bodies in Chicago and he ended up O.K. At least we got a little rust.

If you have any information on either the history of the Monroeville Tip Top Chop Shop or its cleanout, please get in touch. We’d love to hear about it.