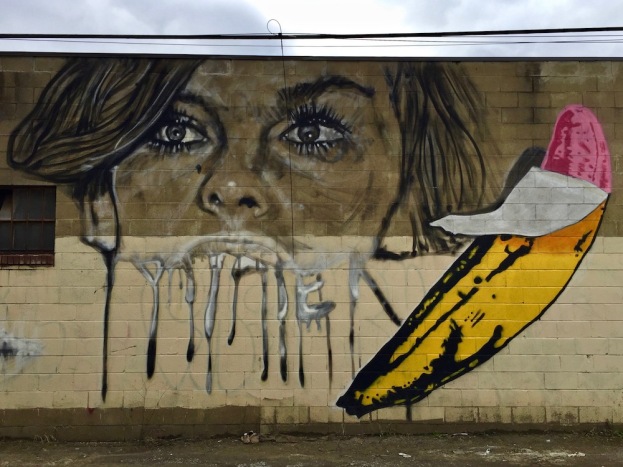 We can still go for a walk.

These are–take your pick—strange, scary, stressful, uncertain, even apocalyptic times. But we all know a daily dose of leg-stretching and fresh-air-breathing is crucial to both our physical and mental health during even the best of days. Make no exception now; you need those things more than ever.

The daily constitutional also happens to be one of the few things we can still do–outside of the home–that is just as freely available now as it was a month ago, before the plague set in.

Don’t look for any streets signs marking Raymer Way; you won’t find it on any maps. That’s just our name for it. But there exists a three-block stretch of lower Lawrenceville that fully deserves one of those ceremonial placards, like the zoo’s One Wild Place or Amazing Kids Way in Squirrel Hill.

It’s there, on two long stretches of Mulberry Way, an alley running parallel with Butler Street, plus another short block of 35th Street, where rock-and-roll mural artist Jeremy Raymer has created a one-man, open air arts district. It’s yours for the perusing any time there’s enough daylight to read the (often very dark) wall surfaces–and you won’t encounter enough other people to worry about social distancing.

The house that started it all. Chez Ray, 35th Street

The entire thing started from the previous owner of the warehouse at 35th and Charlotte seeing me painting my house [across the street] and asking if I wanted to paint on his warehouse. I said yes and started covering the [35th Street] side with the heart, eyes, and Hedy Lamarr murals first, then wanting more space and moving into the [Mulberry Way] alley.

Once this was covered I did want more space, so a few months back, I approached the owner of Morcilla and asked about doing a small piece on the alley entry to the restaurant, so I did that and then I wanted to see about more space, so I approached the Perlora warehouse and after a little bit of convincing (from me and some of their employees who are fans), they agreed to give me free reign on the alley portion of their warehouse. The initial intent was just a practice space for me and its just organically grown into what it is now.

If you’ve spent any time in Lawrenceville, the Strip District, or central North Side, you know Raymer’s work. Think of the giant image of (super hero) Magneto along AAA Scrap Metal’s Penn Avenue building and fence, the full wall Roberto Clemente on Verdetto’s Bar in Spring Garden, or the big Deutschtown Sasquatch. There are also a ton of smaller pieces–of sports figures, wild animals, and art references–that turn up on commercial storefronts, restaurant interiors, and pocket parks around the city.

If those are the final, big marquee commissioned pieces, Raymer Way is the sketch pad, the studies and scribbles. “I am basically allowed to do whatever I please,” Raymer says of his agreement with the Lawrenceville property owners, “I am given permission, but no sponsorship and it has all been on my accord and at my own cost.”

Raymer’s murals fall clearly in the world of pop art. They’re big, over-saturated with electric color, using spray paint–the medium of choice for street art–that often has a certain airbrushed quality, and focus on subject matter around celebrity, movie characters, cartoons, and visual puns. He also has a particular affinity for the color purple.

At their best, Raymer has an incredibly deft hand and soft touch with a can of Krylon. He’s got a great color sense for what’s going to pop from a cinderblock wall or read through the roll-up mechanism of a retail security door. His portraits of real people are arresting, vivid, and fill the walls with an obvious holistic vision that treats the space as a broad canvas to be considered in toto. Raymer’s goofier stuff shows that he’s got a sense of humor and doesn’t take any of this too seriously–something altogether missing from so many artists. 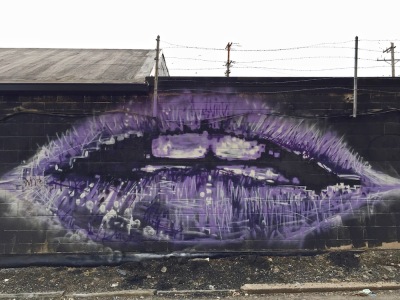 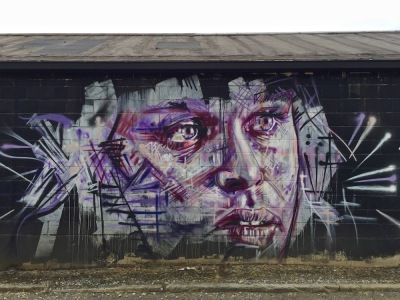 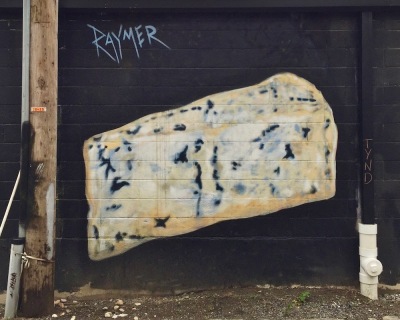 Now, I’ll be the first to say I don’t love all of Raymer’s murals. Do we really need wall-sized portraits of the green Ghostbusters slime monster, Simpsons characters, or–sorry, Star Wars fans–Yoda? A matched pair of Buffalo chicken wings with a halo is kind of funny … kind of.

But let me say this: I have tremendous respect for anyone who goes out there and does their thing and gets this much stuff done, over and over again. To spend one’s free time–not to mention money–on materials, in negotiating with landlords, and decorating the alley backsides of anonymous buildings, is a tremendous gift to Lawrenceville and the city at large.

… and that gift is yours, whenever you’re ready to take that walk.

The key to your heart, Mulberry Way

Getting there: The Raymer Way murals are on Mulberry Way, lower Lawrenceville, between 34th and 36th Streets, as well as 35th Street, between Mulberry Way and Charlotte Street. There are plenty of other Raymer murals in near walking distance throughout Lawrenceville and The Strip District. There’s even a map of locations on his web site.