There is a big hole in downtown Carnegie. Don’t worry—it’s nothing dangerous you might fall into. Rather, an enormous void is all that’s left in the 200 block of East Main Street. That’s where, just about a year ago, a massive fire erupted in the lovely three-story turn-of-the-century building that housed Papa J’s Ristorante for the last 26 years.

The fire damage was so extensive that the entire building has since been razed and the resulting pile of bricks and beams carted away. All that’s left is a large gravel-filled flat lot; a gaping missing tooth right in the heart of the borough’s business district.

The truth is, though, Carnegie—just like every small town and old commuter borough in America—had its share of challenges preserving the history and character of its main drag long before the fire last summer.

The automobile—with its distant reach and attendant expectation of acres of easy parking—big box retail, changes to shopping habits, and that demon Internet have all taken their pounds of flesh from Main Streets everywhere. When you then throw in the familiar one-two punch of big industry closing down and its resultant dramatic loss in population and buying power, there just aren’t even enough customers left over for many local retail businesses to make a go of it. Carnegie’s population peaked somewhere around World War II and it’s been slowly draining people ever since.

But—I’m guessing you know where this is heading by now—there’s a place where you can still see downtown Carnegie at its absolute zenith—and you don’t need a time machine to do it.

Miniature Main Street is an incredible scale model of Carnegie’s business district as it existed in the 1940s. Block after painstakingly-accurate block were carved, painted, and glued by the hands of resident Walter Stasik. Stasik worked on this, his magnum opus, for the last ten years of his life, before passing in 2000.

The model buildings that make up Stasik’s recreation seem to clearly be a loving memory of the downtown he would have experienced in his youth. They’re now on permanent display at the Carnegie Historical Society.

What Stasik crystalized in his elaborate, room-filling recreation is both humble and sublime. The Main Street Carnegie of the mid-twentieth century probably looked a lot like that of any other bustling town of the era. There were independent small businesses of all types filling the storefronts up and down: furniture and clothing stores, grocers and lunch counters, a plumber, insurance agent, beauty and cigar shops, a masonic hall and Moose temple. Downtown Carnegie had competing five-and-dimes and four different movie theaters. 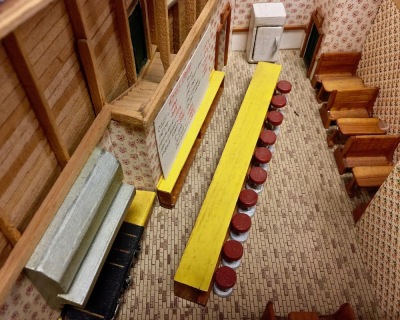 What’s fascinating about Stasik’s models is that they’re not just some nostalgia trip. Their scale—each floor is around eight inches in height—allow the visitor to get right down onto street level and look around in a kind of low-tech virtual reality experience without having to get wired-up to one of those goofy headsets.

Further, each model was constructed with a lift-off roof letting the visitor peer straight down into the little dollhouse-like worlds within. Stasik didn’t have the opportunity to complete the interiors of every building in the set, but the ones that did get finished have a fascinating level of playful detail: specials chalked onto the menu board at the diner; a wooden armchair in a projectionist’s booth at the movie house; a customer testing the feel of a mattress at York’s Furniture.

Stasik’s models aren’t Smithsonian perfect. There’s a rough, folk/outsider art quality to the construction and some visible wear-and-tear on the buildings—fragile signs and lifting wallpaper need to be glued back in place; dislodged doors and lamp posts reset. In some cases, Stasik used molded letter forms for his storefronts; in others, we see the obvious curlicue schoolboy handwriting of the creator in Sharpie-written business signs.

This isn’t to diminish the work, but rather to praise how beautifully and lovingly handmade the entire display is. The materials appear scavenged and the execution improvised. Rows of theater seats are carved from single spindly blocks of wood and plexiglass windows have been carefully nudged into place by Stasik’s aging fingers. 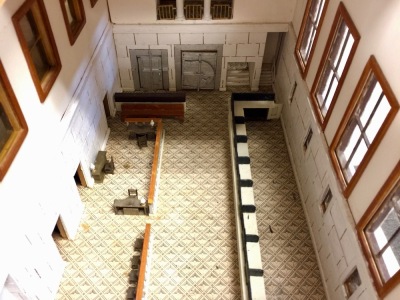 If this blogger had been thinking ahead, he’d have bagged a photo of Stasik’s rendition of the turreted building at the corner of Broadway and Main that would eventually be home to Papa J’s Ristorante. That would have made an artful bookend to the narrative about loss and preservation, the real and the imagined, historical accuracy vs. artistic license.

But alas, sometimes l’esprit d’escalier even catches our hardest-working speculative journalists flat-footed. Besides, there are way more model buildings in this collection than we could possibly photograph for this piece—the enormity of the creation is hard to overstate.

That, and the friendly volunteers at the Historical Society distracted us with a side trip to the mini Honus Wagner museum-within-a-museum so we could absurdly pose in a batting stance with Wagner’s hundred-year-old baseball bat. [Yes: this is worthy of its own Orbit story.] Either way, it’s an excuse to tell you to go check out the full extent of Walter Stasik’s Main Street—and the rest of Carnegie’s great historical collection—in person the next time you’re craving Papa J’s. 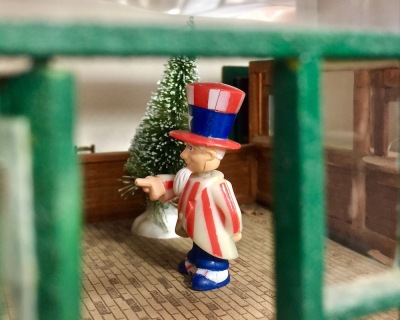 I want you … to visit the Historical Society of Carnegie. Uncle Sam inside bank lobby

Postscript: One glass-is-half-empty reading of the above story may suggest that present-day Carnegie is down on its luck or has “seen better days.” Rest assured, Carnegie’s business district seems to be doing just fine—storefronts are occupied, people are out, there are hip-looking restaurants and boutiquey stores. Heck, there’s even a monthly art walk, experimental theater, and meadery. Next stop, gentrification!

The Carnegie Historical Society is located at 1 West Main Street. There are limited daytime hours Tuesday through Saturday. Admission is free.

One thought on “A Model City: Carnegie in Miniature”