Star of David + heart on Forbes Ave.: one of two thousand, in and around Squirrel Hill

The little stars are made from glitter and felt, plastic and wood, popsicle sticks and laminated paper. They’re tied to the tiniest branches of street trees with ribbon, wire, and bailing twine; they rest lazily in boxwood hedges. The stars commune with other memorials left on handrails and steps, safety gates, and police barricades.

Overwhelmingly, though, each of the small totems–a six-pointed Star of David with a heart at its center–has been knit or crocheted by hand and attached to utility poles throughout central Squirrel Hill[1]. When you pass down Wilkins or Shady, Forbes or Negley, you’ll not miss the stars fluttering–dancing, even–in the breeze. 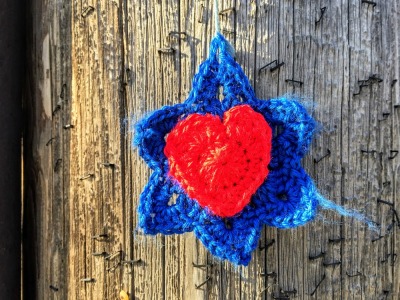 October 27, 2018 may well go down as Pittsburgh’s 9/11–the remember-exactly-where-you-were date for a generation’s most horrific local atrocity. Me, I was in Bellevue, dressed in a stupid outfit, holding a trombone, and standing in the cold rain at the tail end of the borough’s Halloween parade.

The relentless weather that morning pretty much kept all of the expected crowd home, leaving just us obligated parade marchers to get the news all at the same point. I remember feeling useless and helpless–milling around on the vacant, closed-to-traffic main drag before heading home without even saying goodbye.

By now, America has sadly gotten plenty of practice grieving for the victims of mass shootings and violent hate crimes. Even if you didn’t make it up to the Tree of Life synagogue in the days following the massacre, you know what the outside scene inevitably looked like. The victims here were all adults–so it didn’t feature quite so many teddy bears as your, yes, average school shooting–but the scene of an overflowing buffet of flowers and personal notes, photographs and mementos set against protective barriers and caution tape was all there.

In the two months since the Tree of Life shooting, most of these memorials have been relocated. But by mid-November a second-wave tribute–beautiful in its decentralization, variety, and spirit–arrived throughout pedestrian Squirrel Hill. 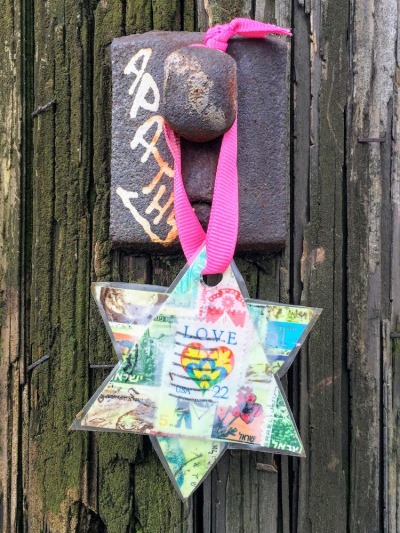 Right now, thousands of handmade Stars of David decorate nondescript public spaces and street-facing hedges and gates in the neighborhood[2]. They radiate out from the Tree of Life synagogue and populate Squirrel Hill’s business district along Forbes and Murray Aves.

The stars are the work of an impromptu online group called Jewish Hearts for Pittsburgh, started by two “craftivists,” Hinda Mandell and Ellen Dominus Broude, both from separate parts of Upstate New York. The Post-Gazette has an article and short video detailing that effort.

Likely, most of those who experience the Tree of Life stars will only see them as brief flashes of color, twiddling in the breeze through the passenger-side window–their forms may not even be recognizable at any speed. The Orbit recommends ditching the car and taking a long contemplative walk around middle Squirrel Hill’s wide streets as the best way to inhabit the diffuse tribute.

Perhaps it should be no surprise but the totality of the experience is incredibly moving. The first, gut reaction to these handmade, intersected symbols of Judaism and love, sent from supportive crafters from around the world, is the most obvious.

“There is more good in the world than evil,” says Ms. Broude in the P-G video, “An assault against one is an assault against all.”[3] That message–something terrible happened here, but there is way more love than hate in the world–comes though loud and clear, ringing out from the branches and telephone poles.

But it doesn’t stop there. So many of the knit stars–hung from a single point, stretched out by gravity, and curled in the weather–end up taking on unexpected anthropomorphic qualities. [Yes, there is one extra appendage in this representation.] The little bodies appear alternately huddled and triumphant, at rest and in play, lifted and weightless in the wind.

This atheist goy had to Google “Jewish belief in an afterlife.” While the religion isn’t nearly as hung up on the notion of heaven as Christianity–preferring instead to value and emphasize life here on earth–it’s also not without its post-mortal coil fallback options. This description, from the Chabad site, seems to sum up the philosophy:

There isn’t anything after life, because Jews believe that life never ends. It just goes higher and higher. In the afterlife, the soul is liberated from the body and returns closer to her source than ever before. 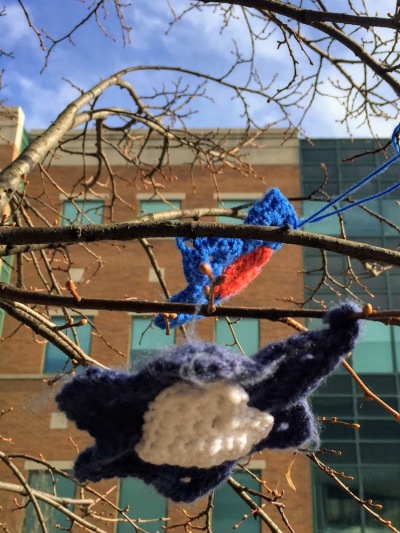 Sure, it was a windy day when we visited and took these photos, but the rapturous lifting of these little forms–literally higher and higher off of their twig and twine moorings, flying up towards the sun–felt like liberation. Hopefully, for the victims, family, and friends of the Tree of Life shooting, they’ll find some peace in this beautiful expression of love.

[1] … and supposedly elsewhere. (But we’ve only seen them in Squirrel Hill.)
[2] Organizers estimate “around 2000” stars. Source: https://www.post-gazette.com/news/faith-religion/2018/11/17/Jewish-Stars-of-David-Tree-of-Life-Pittsburgh-volunteers-knit-crochet-twelve-countries-crafts-facebook/stories/201811170055
[3] Ibid.

One thought on “Higher and Higher: Star-Gazing in Squirrel Hill”