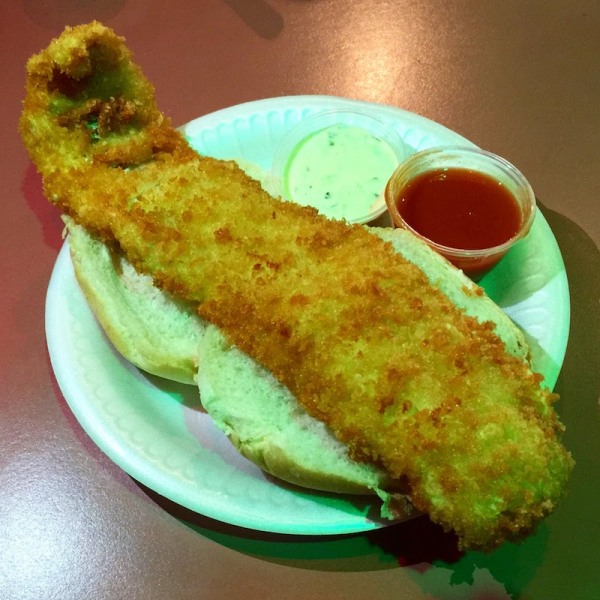 The plate is a standard-issue, eight-inch disposable picnic platter. On it is a large sandwich bun flipped open, both sides up. Across this bed of bread and extending way off its edges lies a gigantic piece of codfish, reclining leisurely like the most relaxed den dweller on a chaise lounge.

The filet is coated in a thick layer of Panko breadcrumbs, deep-fried until golden brown, and still-sizzlin’ as it approaches the table with its partner plate of macaroni & cheese. As is customary, there are no vegetable toppings for the sandwich but the supplies of tartar and hot sauce are ample.

Eleven months a year, this blogger stays away from religion, but he gives up atheism for fish fry season or, as the Catholics call it, Lent.

Catholic? No. But Catholic-curious…sure. Fried cod, mac & cheese, individually-wrapped slices of pineapple upside-down cake or pretzel salad for dessert–a cold beer to go with it if we’re lucky? It’s freakin’ delicious and enough to bring even the most ardent pagan back into the welcoming arms of the church…basement…at supper time.

But isn’t the whole point of the season supposed to be penance and sacrifice? “Having” to eat a giant deep-fried fish filet with a side of haluski or pasta olio once a week hardly constitutes a war effort. If this is The Vatican’s idea of fasting, sign me up for the hunger strike. 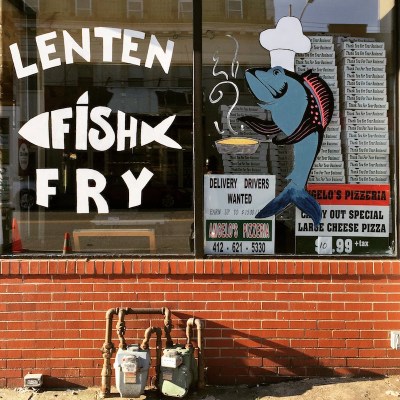 So how did we get here? Apparently this all goes back to Pope St. Leo who, in the fifth century, preached that the faithful must “fulfill with their fasts the Apostolic institution of the 40 days.” (Again with the 40 days!) Traditionally the fasting ritual was much more severe, allowing only a single evening meal every day of Lent (just like Ramadan), and the rules were much more restrictive disallowing all meats (including fish), eggs, sweets, and “other indulgences.”

In the intervening centuries, the church and congregation have come to a strange compromise with the laity seeming to hold all the cards. The concept of a fast has gone from eating only one penitential meal a day to merely cutting out meat on Friday. [That fish doesn’t count as “meat” is a whole other discussion.] This “sacrifice” just doesn’t seem that painful. 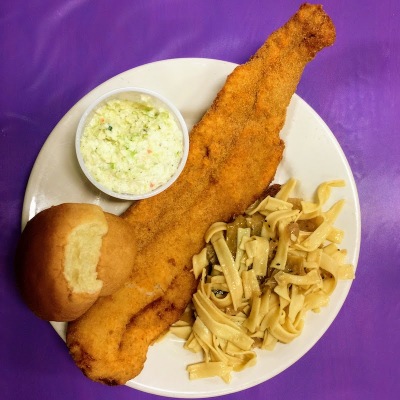 A couple weeks back, this blogger pulled the “Lenten double”–a sort-of Stove Top Stuffing ruse for the fish-obsessed. First, there was an enormous sandwich from Giant Eagle’s seasonal “Fish Frydays” for lunch followed by a full dinner spread at Church of the Assumption. It’s no easy feat–the ridiculously early hours the church suppers keep really requires you shake a leg to pack it all in.

Let me tell you something: I’m going to need a serious weight-loss plan after all the fasting I’ve been doing the last few weeks. Catholics need to come up with a real season of penance and self-denial after the unhinged gluttony of Lent. 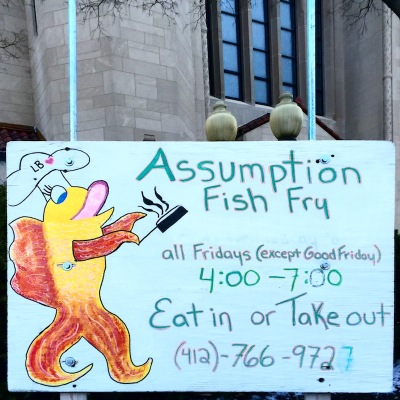 Of course, fish fry-hosting churches do a lot of their fundraising during the six Fridays of Lent and we see evidence of Churches consolidating and closing all the time. So in an era when the larger populace would no longer be described as “god-fearing” it’s an understandable economic necessity that churches need to relax some of the old-world doctrine and bring in some pew-filling carbohydrates.

Week 2: Even non-Catholics get into it! New Jerusalem Holiness Church, Larimer

Still, to stray so wildly from the original “reason for the season” (to borrow from another highly mutated Christian tradition) seems like a real lost opportunity–both for the church and its congregants. While it’s both bizarre and wonderful for us non-believers to look forward to Lent for its distinct church basement suppers, the tradition of voluntarily giving up something loved (or, at least, appreciated) to learn the value of sacrifice and everyday privilege seems like an extremely valuable exercise.

Maybe next year this blogger will have to give up all those fish fry calories, you know, for Lent.

* The obvious addition of lettuce, tomato, onion, and pickle slices would only come from a restaurant offering.