If Rod Stewart is to be believed, every picture tells a story. This one’s a doozy.

In the photograph, the camera lens is roughly eye level with the tallest buildings in downtown Pittsburgh. They’re not “skyscraper” material, but we’ve got a collection of 40-, 50-, and 60-story towers that can legitimately feel “big city” if you pick just the right block to look up in. But here, it’s hard to actually see them–the distant office buildings of Grant and Smithfield Streets are heavily obscured by a foreground scrim of silhouetted trees clustered awkwardly, bent by nature, and leaning with no perceptible pattern.

The city scene is so background, washed-out, and featureless behind the crisp black tree line that it’s nearly unrecognizable if you don’t know what to look for. The storyline writes itself–Pittsburgh: the illusion of a big city within the reality of Appalachia.

big city living: William Street, about half way up

The bummer in taking a hike–if there is one–can be just getting there. As a person who’d rather not be in a car, the irony that one must drive to take a walk is befuddling and frustrating. It’s like purchasing new trash bags to just put them straight in the waste bin. Sure, you could live in a mountain cabin and hike right out the front door, but then you’d have to get in the car to buy your provisions–what a mess!

Not so in Pittsburgh. There are, of course, terrific woodsy trails in the city parks (especially Riverview and Frick), but one needn’t stop there. Between the up-and-down topography and relative sparseness of the hilltop communities, there are ample urban hikes just a bicycle ride or bus transfer away.

they ain’t kidding: curves ahead on William Street

Like the old joke, “I went a to a fight and a hockey game broke out,” we arrived at William Street  last week on journalistic assignment and a hike happened. We were up on Mount Washington to track down and photograph the childhood home of [bygone football hero] Johnny Unitas. [For more on that, see last week’s story “A Football Team That Wanted Him: Johnny Unitas and the Bloomfield Rams” by David Craig.] Oh, we located the house–but we found so much more too.

There would have been a lot more homes up here in young Johnny U’s day–frankly, it’s a bit of a surprise the Unitas house is still standing. William Street, which descends as a snake-slithering one-lane/one-way from Boggs Ave. down to Arlington Ave., has few remaining buildings today. A 1901 map, however, shows us how many homes once stood along the road. Whether that’s because the residential plots were requisitioned to create the surrounding park land or if it just got too difficult and expensive to maintain houses in a holler on the side of a mountain is unknown. Maybe one was a convenient excuse for the other.

In any case, the signs of life are still here. Like any self-respecting city steps hike, the amateur archeologist is rewarded with nature-without-man trees growing through basements, layered stone foundations, felled chimneys, and still extant front steps edging right up to the roadside–all this as the sun’s halo casts a rich, dappled light through the lush greenery of Grandview Park.

There’s a line that every Pittsburgher has a favorite view of the city–the West End Overlook, Grandview Avenue, or St. John’s Cemetery in Spring Hill, for example. The richness of options on this one little path make a fair case for William Street as two or three different best views.

Near the top, there’s a unique look north-northwest to the side of Mount Washington proper–the big broadcast tower at the end of Grandview is an easy beacon. You also get the oddball collection of both traditional and uber-modern houses on little Cola Street in the foreground, plus a glancing shot at downtown and The Point. In the same general area, one can bag a nice sight line across the Smithfield Street bridge to the whole of downtown. 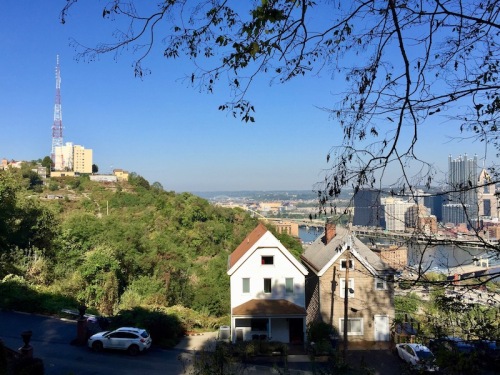 Further down, as William bends to more of an east-west layout, there are vantage points looking directly down the Liberty Bridge and off-angles from either side. Here, you’ll get eyes on the jail, Uptown, Duquesne University, and all the way across two rivers to Troy Hill and Spring Hill on the north side of the Allegheny.

William Street is not without its perils. One big section of the road has begun to crumble off the hillside. Other parts are so narrow there’s not a lot of margin for error. These are mainly concerns for the motorists rolling the dice as they travel downhill, but you’ll want to keep your wits about you.

Citizen-hikers should take note: William is an active city street and cars will slowly edge by you while pumping their brakes. That said, it’s just not that busy–in the full climb up and back on a Saturday morning, we probably encountered less than ten vehicles.

The street even provides for the folks who don’t consider a walk on pavement to be a “real” hike. Climbers have the option to sneak off the asphalt and into the woods near the top of the hill. There, the terrific Emerald View Trail runs right across the street on its route from Bigbee Field/Grandview Park above to the woods around McArdle Roadway below.

These are Pittsburgh’s salad days. Crisp, jacket-weather mornings followed by lush, unrelenting blue sky afternoons full of turning leaves, pumpkin-spiced and decorative gourd fall fantasias, plus a seeming mass conviviality we never quite achieve the rest of the year. Get out there and enjoy it.

One thought on “An Urban Hike: William Street, Mount Washington”