Public health warning: a highly-addictive opiate cocktail of science, camp, Lycra, estrogen, and ass-kicking is about to drop on metro Pittsburgh bigly. The special effects of this drug are not entirely understood–heck, they may not even be fully rendered in the final cut yet! In a strange turnabout, the pushers are law enforcement, their justice meted out in killer vines, laser beams, and escrima staves.

Heroineburgh [note the important extra “e“] is a new, live-action, original character superhero series set in (real) Pittsburgh. The Orbit sat down with series writer/producer/director Manny Theiner to discuss the world he and his team have created, roots of his fandom, and where the stories are headed. Heroineburgh is set to make its debut with pair of big-screen showings on April 30 (details below). 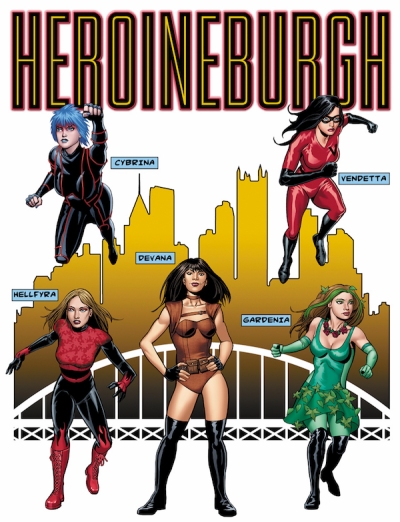 Theiner, a lifelong fan of superheroes and graphic storytelling, describes himself as a “second-wave or classic liberal feminist”. He was inspired to initiate the series after experiencing Pittsburgh Batman–another locally-produced superhero play/video. While he enjoyed the production, it featured almost no female characters and some of the jerks deserved a kick in the keister.

Each episode of the anthology-style series features unique superheroines, evil-doers, and dressed-to-kill costumed villains. We’re told the first [planned twelve-episode] series will end with the characters uniting in a Pittsburgh Heroine League.

Ultimately, Heroineburgh‘s greatest strength is Theiner’s inventive characters and concise, bite-sized storytelling. The standard-issue costumed hero/quasi-science tropes are deployed like exclamation points in Batman‘s fight scenes, but there are also references to the screenwriter’s arsenal of deep-read science, philosophy, and re-envisioned mythology that give the stories an exciting and welcome depth.

Cinematographer/sets designer J. Wayne, editor Frank Farnsaglio, and color correction/effects artists Latent Imagery make up the rest of the technical team. These guys know what they’re doing: the final product looks good, manages to slyly gloss over the improvised studio’s many challenges, and packs more than a few punches. 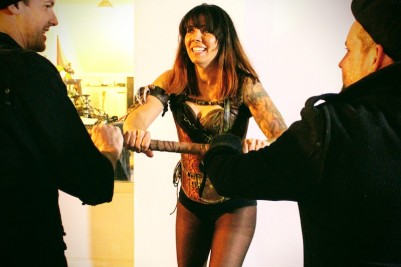 But let’s cut the crap: you’re not going to shell out five clams for Color-Correctionsburgh. Who are these ladies with the funny names, freaky powers, high style and kicks to match? Who will we turn to when the Serbian mob pops out of the Fort Pitt Tunnel? What hero will deal justice to the villainess Devorra, who “gains the power to emit pollen from her hand, turning anyone who breathes it into her slave drone” or the evil Dr. Shvitz and his global warming earth sauna?

Meet Gardenia–the earth mother–who draws energy from the soil and uses the plant kingdom as both arsenal and army. Put under extreme stress, Gardenia’s appendages morph en bois with the invocation of Ironwood fist.

There’s Cybrina, a blue-haired “genius computer programmer” who takes big data to a new dimension. She “gains the powers of electricity and cybernavigation–the ability to transform herself into data and enter any computer system”. In Cybrina’s story (Episode 1: “Anger is an Energy”), she’ll team with fellow technologist Red Gina to battle prejudice and harassment in new Pittsburgh’s tech sector.

Helena Brent transforms into heroine Hellfyra (Courtney Elizabeth) in the Brillobox bathroom [From Episode 2: “I Bring You Fire”]

Hellfyra [just try to get the Oak Ridge Boys tune out of your head now!] may be a “Satanist superheroine with demonic powers”, but even Lucifer’s goat draws the line at theft…if it involves a heavy metal band’s touring gear. When Hellfyra locks devil horns with Mesmera, mistress of hypnotism, look out.

As the “Italian spirit of vengeance”, Vendetta has a family story complex enough to make Mario Puzo grab a note pad with his cannoli. Suffice to say it involves a mafia princess, a capo and his consigliere; tragedy, intrigue, deception, and revenge; Sicily and Bloomfield. Essere Vendetta sicuro, Pittsburgh ha bisogno di te!

Devana is the Slavic goddess of the hunt, whose old-world Eastern European past will chase her down in present-day Pittsburgh. It will be touch-and-go when the heroine crosses paths and trades blows with “superhuman mercenaries” Clockcleaner and Earthmover in a Bloomfield warehouse. Get the large popcorn as you won’t want to miss a second of Episode 4: “Trans-Adriatic Express” to see how this plays out.

Let’s get something straight: The Dark Knight or Guardians of the Galaxy this ain’t. Theiner and crew filmed these first four episodes on a minimal budget, using borrowed sets, with “casting by proximity” kismet.

Full disclosure: this blogger was booked for extra work after running into Manny on the street and spent a cold February evening on-set and in-lab-coat working as a hard hat-wearing knowledge worker at the fictional Cybertech. There, he had the privilege of getting beaten up by the rampaging Red Gina multiple times–one of which involved a plate of Chinese food tossed in the air from an upended break room table.

From that experience, I can tell you that on the Heroineburgh set, preparation is handed-out on a need-to-know basis and third takes are considered bourgeois time-wasters. Regardless, watching preview clips from the not-quite-final versions reveals the filmmakers know how to do a lot with a little, effectively turning the grab-the-camera/let’s-put-on-a-show harried scramble into a quick-paced enjoyable campy romp. Be there at the premier or miss out on a good time.

The author, on set as Cybertech employee in Episode 1 [photo: Pittsburgh Orbit]

Production photos and graphic art provided by Heroineburgh, except where noted.