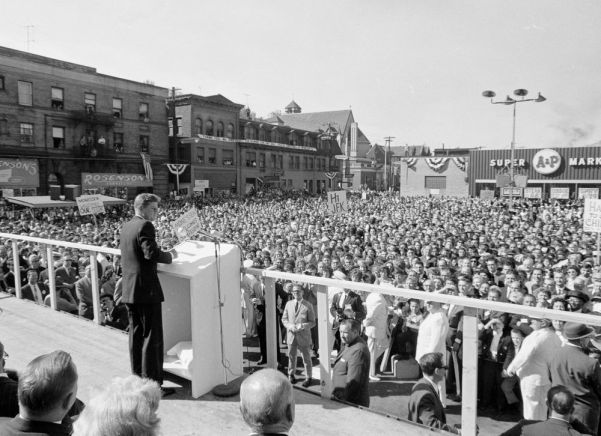 The scene is likely one of–if not the–most remembered days in Monessen history. The President of the United States, John F. Kennedy, stands at a lectern on a stage erected in the parking lot of an A&P supermarket. There, he addresses a sea of faces as far as the camera can trace them in the distance. Dressed in business suits and Sunday best, the crowds peer from windows and crane from behind the stage and up the adjoining streets. The Post-Gazette reports there were an estimated 25,000 people–more than the entire population of the small city[1]–crowding in to be a part of it.[2]

Attendees carry signs of support: Hail to the Chief! and Monessen Welcomes Our President and Hello Hello JFK. Tri-color bunting hangs from buildings and lamp posts. Behind the president are billboard-sized welcome signs from the Croatian Hall, Italian Society of Mutual Aid, Ukrainian Club, and others. A banner fifty feet long stretches under the third floor windows of the Duquesne Hotel: Thank you Mr. President for signing our pay bill – postal workers of Monessen, PA. 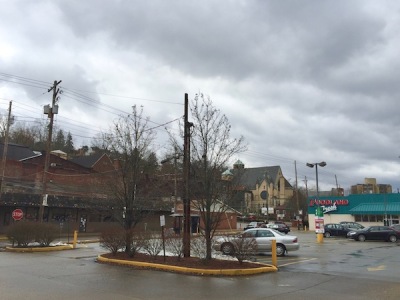 A lot has changed in the last fifty-five years. For one, it’s hard to imagine a crowd today dressing up to thank a politician two years into his or her term. More than that, though, Monessen and the rest of the Mon Valley have suffered as much as anywhere in the country during this time. As a result, the city looks radically different today.

There’s still a grocery store at the same Donner Ave. location [it’s a Foodland now] but gone is pretty much everything else in this scene. The collection of three-story turn-of-the-century buildings between 6th and 7th Streets has been replaced by a couple of nondescript commercial storefronts, plus one small parking lot. 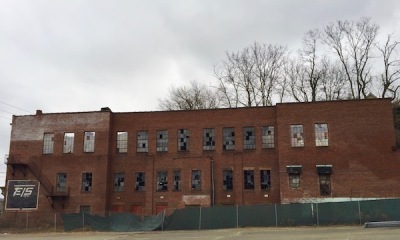 What’s changed more, though, are the opportunities for finding anyone to fill these spaces.[3] Wheeling-Pittsburgh Steel employed thousands of people at solid, union wages until it ultimately shut its Monessen operation in the 1980s. A raft of other, smaller industries were based on the same giant swath of curling riverfront and thrived through most of the last century. Today, the city’s population of 7,500 is around a third of its 1930s peak.[1]

For the first two-thirds of the twentieth century, the small city boomed in all possible ways. Monessen steel built the Golden Gate Bridge and helped defeat the Nazis in World War II. Cassandra Vivian’s Monessen: A Typical Steel Country Town describes a rich cultural environment where immigrants from dozens of countries (mostly eastern and southern Europe) both blended with each other and held onto the food and language, music and dance of the old world. I’m sure it was rough, but it must have been a fascinating place to grow up. 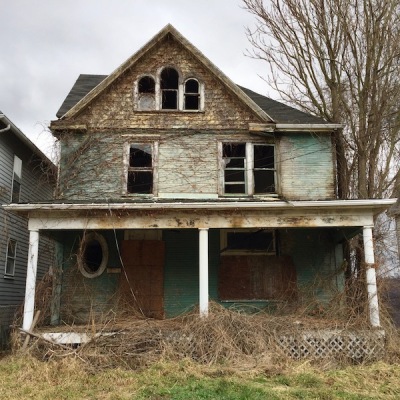 When you lose two-thirds of your population, you end up with a lot of these. Vacant home on Reed Ave.

The slogan Make America Great Again is an easy one to write off cynically as reactionary, nationalistic, resentful, even hate-filled–it’s that appended again that really twists the knife. When, exactly, was America “great” the first time? Was it back before we could conceive of a black president? When a woman’s place was safely in the kitchen? When we pretended that gay people don’t exist? Or was it just when white men were reliably in charge of everything?

The industrial towns and small cities of the Mon Valley suggest such a different reading of this phrase that it’s important to try to see the appeal not on social or cultural terms, but as pure economics. Towns like Charleroi, Donora, Monogahela, and Monessen are achingly beautiful and heartbreakingly vacant. The valley’s need for something better is palpable. 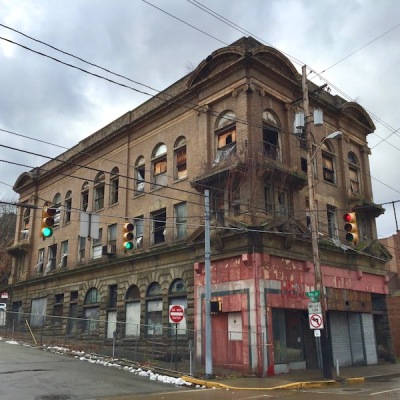 A picture of Health, Donner Ave.

The commercial districts of these towns share a common general design: compact, late 19th/early 20th century two-, three- and four-story brick façades built to support a workforce of thousands who commuted on foot to the local mills and small factories just blocks away.

Those big commercial stretches obviously once thrived with green grocers and dry goods, butchers, bakers, theaters, and hardware–you can still see some of it in the ghost signs fading on brick walls. Today, though, the ghosts are often all that’s left on blocks and blocks of vacant storefronts, empty lots strewn with debris, cracked windows, and caved-in roofs. 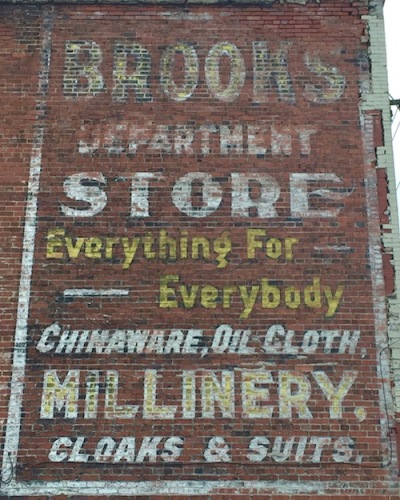 Like Kennedy, Donald Trump (and, notably, not Hillary Clinton[5]) also visited Monessen during his presidential campaign last year. It was for an invite-only crowd of just 200, where he was photographed in front of a bunch of crushed aluminum[4]. Whatever. Eighty percent of life is showing up, right?

Those of us who inhabit the “liberal bubble” may cringe at the pandering macro-jingoism of Make America Great Again and the pathological lies and hate-filled rhetoric it came with. But to look closely at the desperate mill towns upriver from Pittsburgh, it’s not hard to hope Monessen has a brighter future than its fading present. Whether honest or not [we’ll go with not], in that way Trump was ultimately selling the same thing as Barack Obama eight years earlier, Hope. 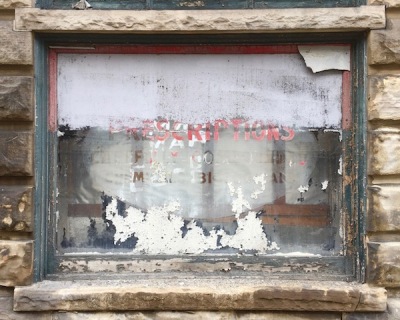 Notes:
[1] Wikipedia lists Monessen’s population at 18,424 for the 1960 census.
[2] “In Monessen, in 1962, JFK was one of the people”, Pittsburgh Post-Gazette, Nov. 16, 2013.
[3] In fairness, both replacement buildings appear to be currently-occupied (by a daycare center and pair of professional offices), but there are many more in downtown Monessen that are not.
[4] “Trump campaign rolls through Monessen”, TribLive.com, June 28, 2016.
[5] That Hillary Clinton didn’t campaign in Monessen–or any individual town–is no crime, but it’s pretty clear that ignoring much of the industrial North hurt her vote significantly in states like Pennsylvania, Ohio, Michigan, and Wisconsin.