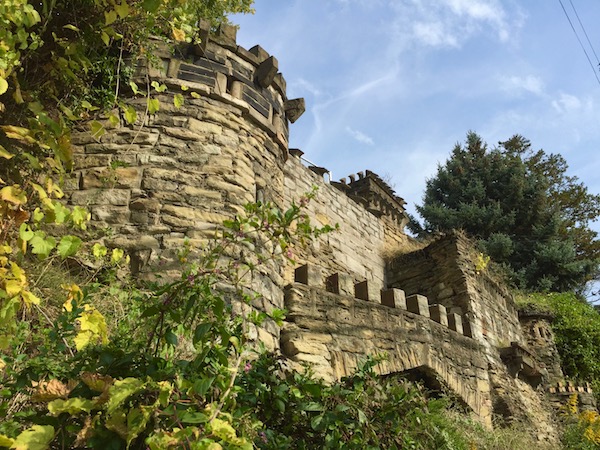 Castle Damas[1], a medieval fortress whose turrets and battlements were formed from mortar and stone rises with a spectacular view of the lands it holds dominion over–through the valley, down to Spring Garden, and across the river to the Strip District.

That these impenetrable walls should stand just up the block from the Spring Hill spring is no accident. The first settlers of Damas Street wisely selected an optimal site for defense, visibility, quality of life, and its free-flowing supply of life-sustaining cleanish natural spring water[2].

The keep and battlements of Castle Damas

Given the news of the week, we can assume we’ll all be getting a little more familiar with wall-building. On our recent visit, we were fortunate enough to meet the lord or this particular manor, who’s probably got as much wall experience as anyone. This day, our regent was engaged in maintenance of the structure, giving his naves a precious Saturday off and pulling weeds from the parapets himself. Lord Damas [Swiss cheese-for-brains failed to record the homeowner’s given name] told us his hilltop house was built in 1926 and its first owner, a baker, began construction of the elaborate wall around 1933.

Perhaps because it hasn’t been around quite as long as its European cousins, the castle wall and its bungalow-style keep are in impressive condition. Our liege told us he’d had to rebuild the top left half of the battlements and after pointing it out, the different colored mortar makes that somewhat obvious–but there’s enough variance in the stonework that this masonry-challenged blogger probably wouldn’t have noticed otherwise.

The owl of Castle Damas

Brendan Gill, (then) architecture critic for The New Yorker, famously wrote “If Pittsburgh were situated somewhere in the heart of Europe, tourists would eagerly journey hundreds of miles out of their way to visit it.”[3] This blogger’s about as crazy cuckoo coconuts on Pittsburgh as anyone, but even he can recognize hyperbole when he trips on it.

That said, when just any old anonymous hillside street gives us these cross-city views, this public spring, and a terrific faux castle/retaining wall overgrown in beautiful wildflowers and fall colors, birds–even a guard owl–well, who are we to argue?

[1] “Castle Damas” is Pittsburgh Orbit‘s name for the construction–don’t bother looking it up (at least, not by that name).
[2] We’ll note that the construction of the uphill houses on Damas Street was considered a contributing factor to the discoloration and impurity of the sping’s water.
[3] In the same quote, Gill also claims “The three most beautiful cities in the world are Paris; St. Petersburg, Russia; and Pittsburgh,” but if the guy has never even been to Akron, take it with a grain of salt.