But there’s a nebby, morbid, and yes, prurient curiosity too. How did things get this way? What’s going to happen next? Why isn’t anyone paying attention here? If I were a citizen of Duquesne, or any of its struggling sister boros, would I be resentful of some ne’er-do-well blogger poking his bicycle-riding picture-taking schnoz into my town’s business? I don’t know, but yeah…maybe.

The news came just this week that Monday’s huge thunderstorm had finally collapsed the roof and several wall sections of the century-old former Holy Trinity Roman Catholic Church in Duquesne. The church is so close to catastrophe that nearby residents have been relocated and the city is expediting plans to demolish what remains out of safety concerns.

The Orbit had the good fortune–or, at least, good timing–to stumble upon and check out Holy Trinity mere weeks before the walls literally came tumbling down. We captured a few final images of the church, its threadbare, about-to-drop ceiling, and the sad beauty of a kind of old world liturgical construction that we’ll surely never see created anew.

Pittsburgh is littered with beautiful, old churches. Many of the ones that no longer function as houses of worship have been repurposed into any manner of creative second lives. Performance halls, community centers, art studios, living spaces, a hookah lounge, and even a brewery have been reborn from sacred bones. Last year we got all dewey-eyed drooling over the potential of the former St. George’s Syrian Orthodox Church in the lower Hill. This blogger’s co-worker is still trying to figure out what to do with the combined church and school he bought in Tarentum for the price of a suped-up SUV earlier this year. 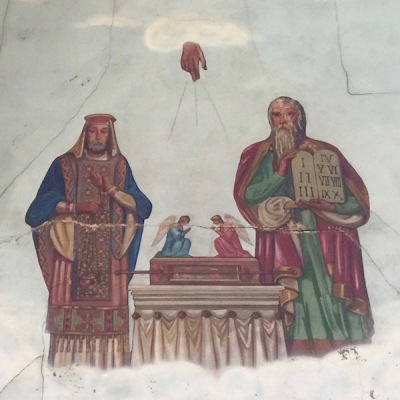 So it’s worth remembering that despite metro Pittsburgh’s relative urban health–verging on full-on priced-out gentrification in some necks of the wood–places like Duquesne exist just a couple miles down the river…any of the rivers. They’re dying (quite literally) for any investment.

In Duquesne, according to the WTAE report, city managers can’t even find the owner of the old church. Twenty years ago–maybe not even that long–the former Holy Trinity, abandoned by its congregation in 1970, was probably still in a state where it could have been saved, loved, and re-used. Now, we’ve not just lost the potential of preserving something unique and beautiful, but that very thing has become a safety hazard to even leave around as standing ruins. Sigh.

Mrs. The Orbit and I sometimes squabble about what the changes to Pittsburgh’s fortunes will really amount to. Will the Lawrencevillianization of the East End spill across the rivers and turn the city into another place where, you know, “real people” can’t afford to live any more? Or do we just have way too much available space[2] and cheap housing with nowhere near the curb appeal of a New York or a San Francisco?[3]

This optimist tends to believe the latter. But if, by some crazy twist of socio-economic happenstance, every looking-for-a-change young person really does decide to turn Pittsburgh into the “next Portland”, hopefully it will mean a breath of life to the immediate industry towns just outside city limits which will inevitably absorb some of the overflow. If we could see good things come to Ambridge, New Kensington, McKeesport, and, yes, Duquesne, well, that might make it all worthwhile. Let’s just hope it happens before all the roofs collapse. 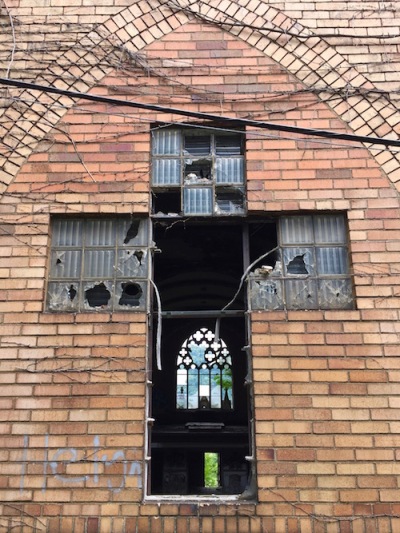 Also: Lost Monongahela has a nice write-up with some great photos on the history of Holy Trinity and the congregation’s decision to build a brand new church in nearby West Mifflin and abandon their original home in Duquesne.

[1] At least, one of its missions.
[2] Pittsburgh’s current city population is around 325,000–just about half of what it was in the 1960 census–there is a lot of vacant land here.
[3] Not to mention the sunshine and no-snow climate of a Charlotte, Miami, or Los Angeles.