Regrettably, The Orbit had accepted the mystery around the Golden Babies–like the Kennedy assassination, or where real babies come from–would likely never be solved.

But then a tip of the reddest and hottest variety came in: “MAJOR new development in the golden babies,” it began. What followed was a pair of plot twists to this ongoing street art narrative that both flipped our collective wig and, like Michael Phelps waking from his doobie-smoking Subway bender, re-lit a fire underneath this blogger that fans had thought long extinguished in the purple haze of five dollar foot-longs. 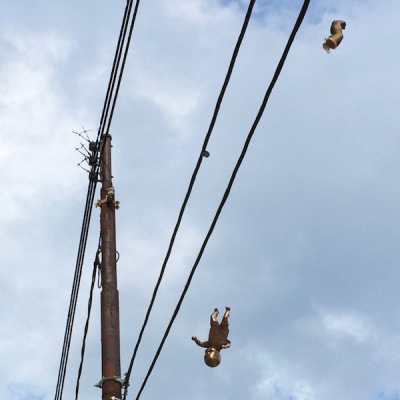 Golden baby has a leg up on other street art

Faster than you can say quasi-respectable news source we hoofed it up to Constellation Coffee. The café sits right where our first-sighted golden baby (“Penn Baby”) appeared. Here, we could confirm the tip–and also enjoy a delicious cup of coffee*.

The story, right from the baristas at Constellation, goes like this: one Sunday morning, a concerned citizen phoned in a complaint to the city. Apparently the golden baby, dangling by his ankle from the wires on the 4000 block of Penn Ave., was just too much. The substance of the concern is not known, but we’ll take a wild guess that the baby was deemed “offensive,” “creepy,” and/or “weird.” Fair enough, I suppose**.

View down Penn Ave. with golden baby and loose foot.

With nothing more substantive ablaze, the fire department was dispatched to remove the offending infant from the airspace over Penn Avenue. For whatever reason, they were unable to either undo the baby’s hanging wire or just cut it off, so the crew made the bizarre decision to instead saw through its tiny plastic leg. This allowed the removal of most of the kid, but left one stray golden foot, ankle, and calf dangling from the telephone wires.

Side note: This action begs a number of questions. Among them: Is leaving a disembodied leg really less offensive than the whole baby? and How is it that a street artist/prankster has a longer ladder than the fire department? and If I’m in the third floor of a burning building should I just accept fate and kiss my feet goodbye?

Strange? Sure is! But what happened next will blow your mind! [That is, unless you’ve already looked at the pictures.]

In less than 48 hours, a brand new golden baby went up on the same stretch of wires–within mere feet of the foot. “Penn Baby 2” generally looks the same as the other golden babies, but with the key differences that s/he’s clothed in a red onesie (the others are white) and that garment appears to be stamped or silk-screened with some mystery insignia (the others are plain/unadorned).

If blogging teaches us anything, it’s to not rest on one’s assumptions. The strange circumstances of Penn Babies 1 and 2 only prove that black is white, up is down, child is father to the man, and therefore, baby is, uh…older sibling to the child? Ah, hell.

This story is not over yet–no, not by a long shot. There’s one very important piece of evidence still in dispute–the whereabouts of the footless and foot-loose Penn Baby. Sources say it’s in the possession of Constellation Coffee–secured in a drawer right on the premises. But when the subject came up during The Orbit’s interrogation of the staff, the aforementioned “friendly” baristas clammed up tighter than a set of quad toms at a Sun Devils half-time show. Believe you me: their guilty eyes have got no rhythm.

What are they hiding? O.K., we think we know what they’re hiding, but why are they hiding it? You can bet we’ll get to the bottom of this…or at least to another cup of that delicious coffee.

* Constellation makes a damn good cup of coffee.
** If only a phone call could have the much more offensive Crocs stripped from the feet of our citizenry so easily.