Two of the friendliest alien lifeforms one is likely to encounter wave hello from the distance. Welcome to Rankin! they seem to suggest. The creatures’ giant insectoid bodies are as large as the glass entry doors of an elementary school, comical color-coordinated antennae bob from their big-eyed heads.

In front are a panoply of the borough’s truly fine citizens: a physician, the mayor, 4-H club members, their advisor, and one sullen teenager*. In the background, Old Glory waves spectacularly as a perpetual rainbow gilds the perfectly blue sky.

It’s one of the Images of Rankin, a series of four large murals** created by artist Connie Merriman along with a dozen Woodland Hills high school students. The paintings pay tribute to positive community members in Rankin through posed group portraits with backdrops of notable borough locations. The set turns twenty this year.

The images decorate an otherwise drab, high cement retaining wall half-way between, and parallel-to 2nd Ave. (aka Rankin Blvd., below) and 3rd Ave. (above). They form the backdrop to a small parklet with a wooden gazebo/bandstand at the north end.

The ladies and gentlemen of Rankin

Rankin Borough has had a rough few decades. The giant U.S. Steel mill along the river stopped producing in the late 1970s and it never had the business district that neighboring Swissvale (to the north) and Braddock (south) have. Today, its unruly collection of squat row houses, frame worker homes, and newer (but not new) apartment terraces have clearly had their share of wear and tear.

But there’s a lot of pride in these paintings that celebrate the people in the neighborhood that are (or, at least, were, in 1996) still fighting for it–a councilwoman, president of the CDC, members of the Rankin Christian Center, a businessman, a community organizer. Like Alfred Hitchcock before them, the 4-H Club members took the opportunity to paint themselves into Rankin’s history.

Youth of Rankin: watch out for that weed!

Back in March, we covered the tragic and beautiful deterioration of the murals of the Sewickley Speakeasy. Many of the thoughts from that post could be restated here, but there are some notable differences. Where the Speakeasy paintings suffered from paint flaking and water seepage, the Rankin murals are more intact, but have been substantially sun-bleached and overtaken by nature.

In both cases, the artists’ work is skilled and recognizable–I bet everyone in town could name the figures portrayed. That said, these ain’t Rembrandt. There’s a delightful amateur quality that’s somewhere between folk/outsider art and thrift store chic. The trees look like cartoon backdrops and perspectives are distorted; hands are formed like stiff mannequin parts and people tilt awkwardly as if magnetically drawn. And then there are those overly-excited bug-like aliens… 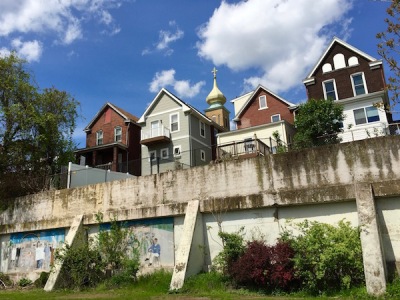 In context: retaining wall with the Rankin murals

* All mural subject identification comes from the very informative entry at pghmurals.com
** The paintings are actually on OSB mounted to the wall, so they probably aren’t technically “murals”.

One thought on “Rankin Amateurs”