The cemetery, perhaps more than any other civic institution, implies permanence–or maybe eternity. Headstones are carved from granite or cast in bronze. The deceased are entombed in a manicured landscape that we optimistically imagine will appear with the same tranquility forever. Rest in Peace is both believable fantasy and contractual expectation for those laid out under its well-groomed acres. 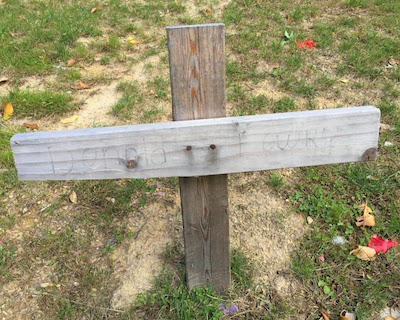 So The Orbit‘s purely accidental arrival on a section of homemade or “do-it-yourself” grave markers at the far back of Highwood Cemetery was both a complete surprise and a total revelation. From a single PVC pipe with a child’s art class cement step stone to a pair of two-by-fours crudely nailed together, the departed’s name applied with a Sharpie to the bare wood, these memorials are already sun-bleached, rain-soaked, and definitely won’t make it through that many Pittsburgh winters. 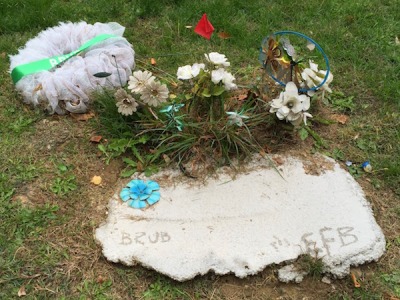 This blogger will be the first to admit his general good fortune, both in life, and yes, in death. He’s still breathing, for one, and has never had to bury anyone, never had make funeral arrangements or pick out a casket, never had to select a grave plot or deal with a funeral home, never even had to make awkward conversation with distant relatives at the wake of a close loved one.

And so, of course, I’ve also never been in the position to select a headstone. Nor had I ever even considered that one might be able (err…allowed within the cemetery’s rules) to do this for oneself. 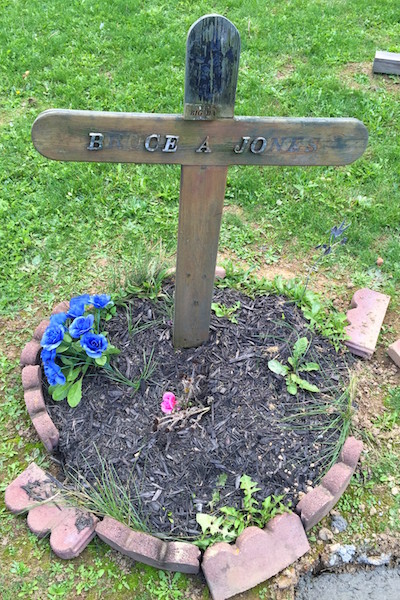 This whole month, Pittsburgh Orbit has been visiting local cemeteries. You start to see some interesting patterns when you spend enough time in a place. One of those is that in terms of visitation, our cemeteries may be roughly divided into three general sections. There’s the older parts, full of dramatic high-gothic mausoleums, giant focus cenotaphs, stained glass, and ornate statuary, often accompanied by a (locally) famous name. Jennie Benford gives a great tour of such monuments in Homewood Cemetery. Then there are the newer sections of (generally) more humble graves for the recently-departed. These collect nearly 100% of the flowers and teddy bears. And then there’s everybody else.

If your name isn’t H.J. Heinz or Lillian Russell or Stephen Foster and if you didn’t choose a gravestone tribute to Jaws, well, your monument may be available–and it’s probably still in good shape and totally legible–but realistically, probably no one cares that much. I’m not trying to harsh the mellow of someone who’s, you know, already dead, but it’s the truth. Even etched in stone, we’ve got a limited shelf life.

I think this is ultimately what gives Highwood’s D.I.Y. graves such emotional power. These aren’t cold stones that will dramatically outlive the families that planted them. They’re very much living tributes for the people who are still in their lives and they will exist for exactly the time they’re most in need–while their loved-ones are still grieving.

I don’t know if it will ever happen, but you could imagine this as a really beautiful, sustainable model for the future. Allow the family to have the closure of a funeral, burial, and a completely home-made memorial that they can visit for five or ten or twenty years–whatever makes sense. But ultimately return the earth to a general pool for another generation to use.

That may or may not be something that would sell to the general cemetery customer but I’d be willing to–let’s abuse our metaphors here–put it in the ground and see who eulogizes it.

Orbit note: There are so many of these D.I.Y. graves in Highwood and they raised so many interesting questions that we decided to break this into two posts. Here’s part 2.

5 thoughts on “The D.I.Y. Graves of Highwood Cemetery, Part 1”