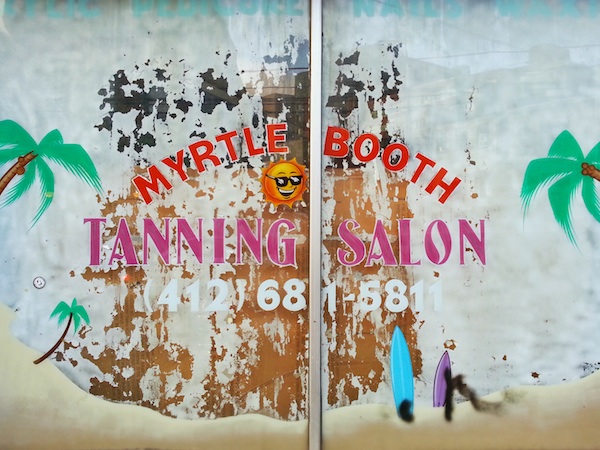 Very recently, the long-vacant storefront at 4116 Main Street in Lawrenceville/Bloomfield finally turned over. By chance, I was lucky enough to have ganked this photo of the most recent business a few months before it disappeared.

Why do I care about an ex-tanning salon? I don’t even like real sun that much! Well, there were just so many little things to love about the Myrtle Booth windows.

I’ve been to Myrtle Beach

Myrtle Booth is clearly a riff on Myrtle Beach, the popular South Carolina beach/party town where many pasty northerners prefer to vacation this time of year. This blogger-to-be used to live just up the coast in Wilmington, NC. In the couple years I lived there, I made the hour-long drive down to Myrtle Beach a number of times, seemingly all for some goofy reason.

I remember driving down with my friends Detlef and David on the former’s quest for plastic pants, a necessary adjunct to the aspirationally-epic rock and roll he was performing at the time. No memory of whether he located them or not. I also remember making the trip with musical pen pal Marion, visiting the southern United States from Great Britain, along with Portland Orbit‘s own David. The parade of signs advertising “shag dancing,” “shag contest,” “shag music,” and just plain “shagging” turned her porcelain English sun-starved cheeks blood red. In the lowlands of the South, nothing could be tamer than shagging, but we understand it means something entirely different across the lake.

Shag classes in Myrtle Beach: come join in or watch! [photo: the Internet]

You know what? I was there at least one more time. David (again, Orbit David) (what a prince!) helped me pack up a U-Haul and move from Wilmington to Pittsburgh. My repayment was to take him to Medieval Times wherein we ate giant turkey drumsticks, drank Pepsi products, and watched the pageantry of real humans and horses parading and jousting on the dirt floor of suburban Myrtle Beach sprawl. [Note to those relocating cross-country: an evening for two at Medieval Times is a lot cheaper than professional movers and pretty solid entertainment. Go Green Knight!]

Medieval Times: Where you’re the king and the Pepsi products are all-you-can-drink [photo: the Internet]

All this is to say Myrtle Beach is fine, but it’s not the destination I’d name my business after. But then, I probably won’t ever open a tanning salon. As my mother is wont to say, “maybe in my next life…”

Every square inch of their big front windows was painted over

I don’t know that I can name any other business that so successfully blocked out the light as Myrtle Booth. The irony that a tanning salon–in legendarily bleak Pittsburgh, no less–would attempt to thwart real sunlight from breaching its interior is just too great. Maybe people walk around naked in tanning salons? [Note to self: investigate!] I feel like that’s the only plausible explanation for this particular design decision.

The way the window was fallING apart

I can’t remember a time Myrtle Booth was actually open for business and we’ve been in the neighborhood for fifteen years now. You can see that aged wear it the way the white background paint has flaked off and has an amazing art-imitates-life look of loose sand on a wooden surface. I also love the single aborted attempt at graffiti in the pair of small black spray paint runs in the bottom right corner. What happened? Did the assailant just run out of paint at the wrong time? S/he never felt the need to come back and finish the job? Kids these days! No commitment!

Back in May, we eulogized the relocation of Goeller Generator, a decades-old non-sexy business that cashed-in on rapidly-gentrifying Lawrenceville to make way for new upscale eats and digs in the Sixth Ward. The change from Myrtle Booth to its new life as Overcast Skate Shop is happening in the same general part of town, but with a very different set of circumstances. It’s hard to feel anything negative about a new business moving into to a storefront that’s been empty for so long and we wish them well, but I’ll still miss those big front windows.

One thought on “An Orbit Obit: The Myrtle Booth Tanning Salon (Storefront)”