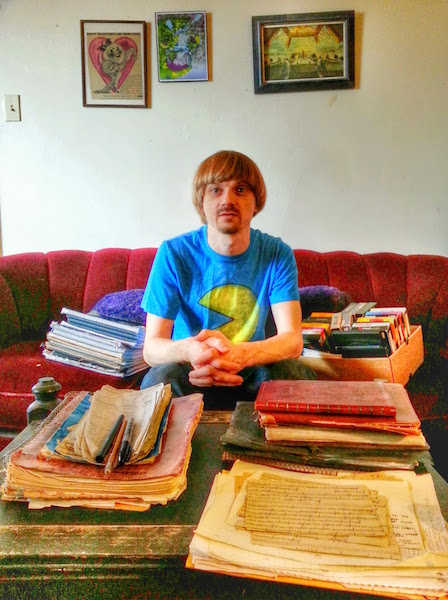 Weird Paul at home with his personal archive

Today, Pittsburgh Orbit celebrates a small milestone: this is the blog’s fiftieth post. That half century occurred in almost exactly six months, making The Orbit on an optimistic hundred post-a-year trajectory. I don’t know if that’s a believable or sustainable or even desirable pace, [likely not, we’ve got vacation coming up] but it’s still fun, and it’s still motivating, and there is no lack of things to (un)cover. Dial up another fifty!

Why make this big spiel about digits? Well, today’s story is all about numbers, as well as lists, and collections, and memories, and personal archives. We’re going to get into all of that with a guy who was prescient (or obsessive) enough to start recording and collecting the minutia of his life at a very early age and has kept it up for thirty-some years with no signs of slowing down.

Weird Paul Petroskey is a prolific Pittsburgh musician, raconteur, video-maker, and now television variety show entertainer. But before he got into any of these things, he was documenting himself and the very immediate world around him.

Paul’s habit began with cassette tapes and his father’s tape recorder, graduated to recycled day planners-turned-diaries, and eventually found him filming hours upon hours of videotape and filling entire notebooks with aspirational accomplishments and neurotic achievements. This old schooler has gone full Web 2.0 with his own YouTube channel, Vine, etc.

The Orbit sat down, stood up, took pictures of, and ate Fiore’s Pizza with Weird Paul wherein we got to dig through all the primary sources and see exactly where the magic continues to happen.

The “Original Vlogger”, a teenage Weird Paul on video, sometime in the 1980s [photo: Weird Paul]

It all started with movies. As a young teenager in the 1980s Paul’s first love was film–especially the weird stuff. With the acquisition of The Psychotronic Encyclopedia of Film–a guide to all things horror/exploitation/sci-fi/B (before the Internet democratized such knowledge)–he began creating separate lists of all the movies he wanted to see, along with encapsulations and ratings of the ones he managed to get to. This list is maintained to this day.

As Sir Weird-a-Lot tells us, he’s “seen 8,460 movies; 2,318 of them are listed in the Psychotronic Encyclopedia. 813 of the movies were either produced in Italy or directed by an Italian. The actor who appears the most is Christopher Lee (98). The most watched actress is Marianne Stone (68).” Paul keeps the films watched list in a special large spiral-bound notebook with his own star-based rating system.

His Weirdness estimates that he owns over 4,000 movies, most of them on around 1,000 VHS tapes. (Sorry, no exact figures here–he stopped keeping this particular stat twelve years ago.)

The Weird One got into music in short order and there are a ton of videos where Paul assembled his younger siblings into what would become known as “fan videos” lip-syncing and/or acting out current top 40 hits of the day. The likes of Falco, Rod Stewart, RUN DMC, and Lindsey Buckingham all get their due. Then Paul discovered metal.

A great recent video titled “Heavy Metal Memories” recalls The Weirdmaster General’s obsession with Pittsburgh’s first all heavy metal radio, K-Rock 107, its quick rise and fall, back in the day. The fan videos continue, but now include black leather, eye makeup, head-banging, and the occasional thrown goat. Between these two eras, you’ll not find a better encapsulation of white suburban America in the 1980s.

Wading in the weeds with Weird Paul

The avalanche of Weird Paul songwriting, recording, and self-released cassettes begins somewhere in here too. They’re all there: non-stop party rock classic cassettes like In Case of Fire, Throw This In, I Need a Pencil Sharpener, and Now I Blow My A-B-Cs. Thanks to Paul, no one can ever again get a piece of meat in their Tang without firing up the earworm machine.

Dr. Weirdenkranz tells us: “I’ve written or co-written over 750 songs – including parodies. I don’t have an exact number, because I was up to 750 but I haven’t added in a few from the new album Ben [Blanchard] and I released [PP2BB].” These amount to literally dozens of album-length cassettes, LPs, seven-inch singles, and compact discs. He’s performed live exactly 527 times.

Weird Paul’s musical oeuvre is an enormous subject unto itself, so we’re not going to attempt to cover that here (at least, not right now). Suffice to say he’s the consummate showman and promoter with many avenues of access.

The Weird Paul Variety Show is a whole lot of fun and thoroughly Orbit-approved. It airs Thursdays at 7:30pm on Cozi TV Pittsburgh (59.1 through the rabbit ears) and on Verizon Fios channel 463. [No: you can’t just watch it on the Internet machine.] Check out the Variety Show for a steaming hot serving of Weird Paul and the gang. 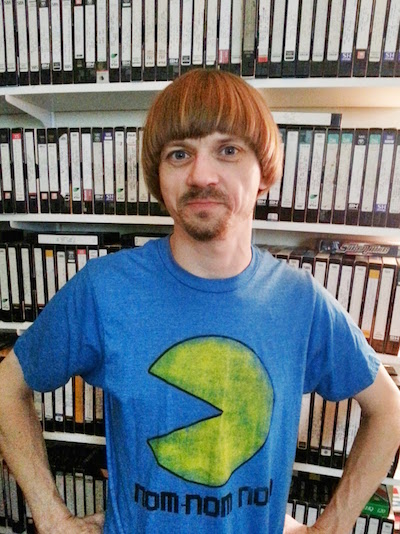 Weird Paul with the videotape archive