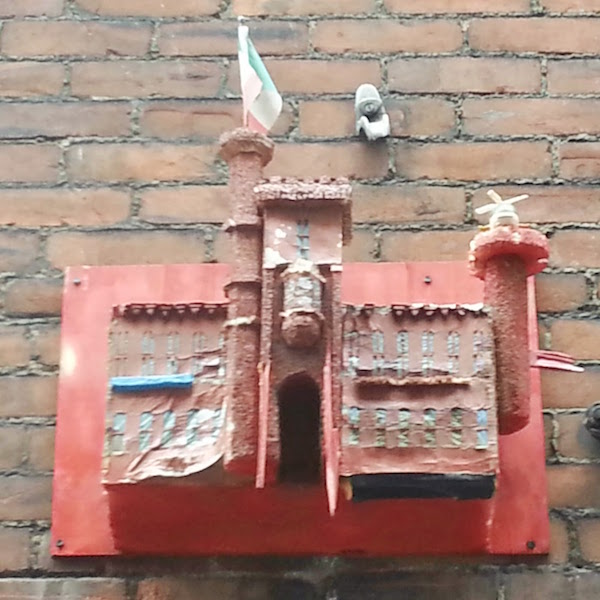 Man, can The Orbit ever haunt some alleys. Some days it seems like all the good stuff turns up in them. It was that way recently when this blogger found himself headed home from downtown, rolling through Spring Way (the long alley between Liberty and Penn in the Strip District). There I was, minding my own business*, not a care in the world**, when something quite literally popped-out from the brick wall high over head causing one citizen-journalist to nearly eject himself from his bicycle seat with the hasty application of a desperately in-need-of-repair set of brakes.

What could possibly demand this kind of reckless photo-pseudo-journalism? Well, the astute reader has probably already divined that there was a mysterious red castle fixed to a painted piece of wood and screwed to the wall. The piece is high over head (I’d say maybe twelve or fifteen feet off the ground?)–so unnaturally out-of-sight and out-of-mind that less reputable bloggers and side-street walkers wouldn’t even have noticed its presence.

Ha! It’s this kind of attention-to-detail that hopes to land Pittsburgh Orbit as your go-to news source. Look no further! But where was I? Oh, yeah–the castle.

We have very few clues to tell us what this is all about. I’m calling it a castle, but it could just as easily be a prison, maybe a school, or some other institutional building with turrets and large porticos. The model has what appears to be a flag of Mexico affixed to the high central parapet, but it’s up too high to make a positive ID. There’s also a dramatic helipad with a tiny yellow chopper seated in place. 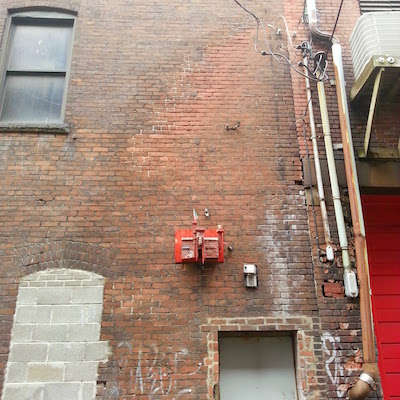 In context: the tiny castle affixed above window/door height

“Real” castles may last for hundreds (thousands!) of years, but this objet d’art d’alley will not. It’s made of some combination of particle board, foam, paper, and paint and is already showing some serious deterioration. I doubt it will make it through more than one harsh Pittsburgh winter—and that’s assuming the man doesn’t take it down before then.

Getting there: For all these reasons, if you want to see the tiny castle, you shouldn’t wait too long. Those headed to Penn-Mac for their Fiore Sardo or to Stan’s Market for cheap peppers this long holiday weekend should take the extra couple minutes to walk around the corner. The castle is located in Spring Way on the block between 21st and 22nd Streets, approximately behind Luke Wholey’s Wild Alaskan Grill. Look up. 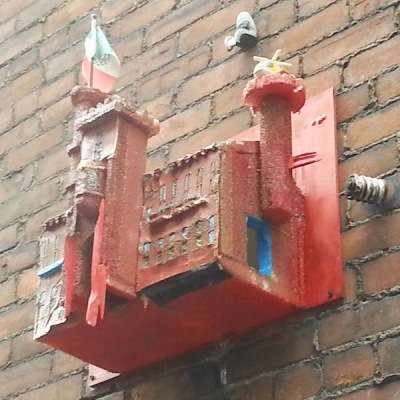 Note: An Orbit apology for the photo quality here, which does not meet our usual standards, but it’s the best we could do under the circumstances. The piece was so high I had to get way back to snap it and the ol’ camera phone just doesn’t do too well with the zoom.

2 thoughts on “A Tiny Castle in The Strip District”