The murals popped-up probably ten or twelve years ago and just like the scenes depicted in them, for Foodland’s (now Shur-Save’s) customers it was like a bomb had dropped in the parking lot.  Seemingly overnight, the nondescript backside of the windowless cinderblock Bloomfield V.F.W. was suddenly transformed into an electric war fantasy where a battleship caricature drifts next to haggard Vietnam G.I.s, a chopper hovers in air support.  World War I-style trench warfare plays out next to a rendering of the famous photo of the V-J Day Times Square kiss.  An evil black stealth bomber soars overhead.

The single large mural covers two sides of the building and features a collection of the most iconic images from each of the last century’s big wars (Korea and Kuwait don’t seem to have made the cut).  The scenes are all John Wayne glory without any of suffering, tragedy, or boredom that the actual veterans inside the post must have experienced.  I suppose that’s to be expected, and yet things can’t have been all that great for every V.F.W. member.

I don’t know when or why the Bloomfield V.F.W. closed, but now that time has passed and the murals have faded and physical structures decayed, they’ve lost at least some of their gun-toting braggadocio and taken on a new air of sadness and absurdity.

Why is the Times Square couple in front of a wall of breaking waves?  Many of the wave crests are literally breaking as the four-foot retaining wall deteriorates under them. Why does the battleship have hundred-yard-long cannons? (Ladies: don’t answer that one.) And why is there a flag-colored curtain exposing the scene as if it is a literal theater of war?

The Vietnam section suffered either a most inept act of vandalism or an unfortunate spill from someone working on the roof. The gas mask-wearing warrior looks out from a trench immediately behind more crashing waves.

I don’t know what will become of the former V.F.W. or its murals and for once I don’t even have a rooting interest either way.  Godspeed. 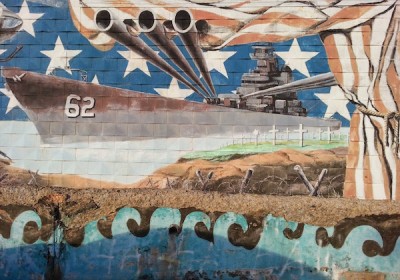 It’s not the size of your cannon… 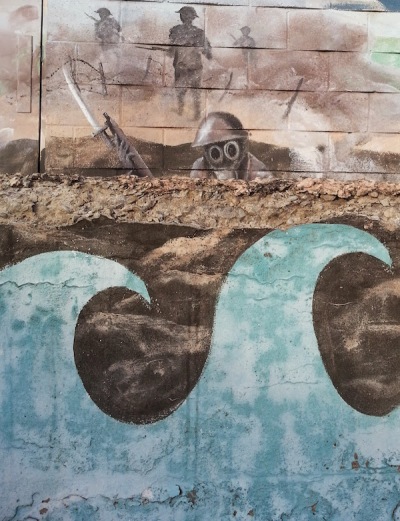 One thought on “Murals of the Bloomfield V.F.W.”