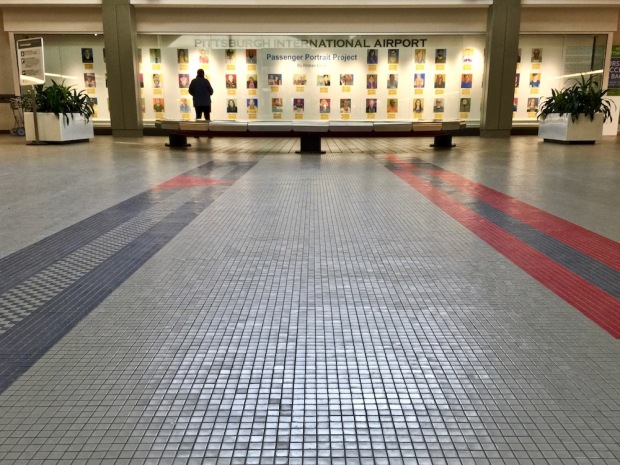 Appearing like a glowing apparition rising from the dull gray is a an enormous illuminated display case that nearly spans the entirety of the north wall. Inside the glass is a series of hand-drawn, brightly-colored, chalk pastel portraits. The subjects are young and old, of all complexions and hair colors, smiling and noncommittal, dressed in business attire and printed t-shirts. Together they’re all part of the Passenger Portrait Project.

From the late summer through mid-fall, Pittsburgh artist Kirsten Ervin spent every Thursday at the airport. She wasn’t flying anywhere, nor was she there to drop-off or pick-up an air traveler. Ervin’s reason to make the trip each week was to meet strangers passing through the airway’s concourses. Those with an open mind and a few minutes to spare would have an original artwork created of them, right there on-the-spot.

“With passengers in a place like the airport you get such a wide cross-section of people, going different places, from many different cultures,” Ervin says, “It’s more diverse than, say, your average shopping mall.”

The process began with three simple questions: Where are you going today? What’s the best trip you ever took? and If you could go anywhere in the world, where would you go? The participants’ answers to these are included alongside the final portraits.

From there, both artist and traveler/model were off on the brief but intense relationship that is a one-on-one, up-close drawing session.

Ervin is a multidisciplinary artist who’s worked in paint and collage, hooked rugs and embroidery, puppetry and theater, as instructor and consultant. In previous work drawing “furries” at Anthrocon and an ongoing project having her Lawrenceville neighbors sit for her, Ervin is not new to quick-study figure drawing, either. That said, the Passenger Portrait Project is by far the biggest of these ventures, so far.

“Drawing or painting a portrait is a very deep meditation on another person as a human being,” says Ervin, “You have a very directed focus on a person for a period of time.”

The majority of the airport drawings were done in short 15-20 minute bursts when early-arriving passengers had some extra time at the gate before boarding. A photo was taken of each participant with their in-process sketch. Later, the 11″ x 14″ drawings received after-the-fact touch-ups, extra details, and filled-in backgrounds at home in Ervin’s studio.

The drawings preserve the rough, immediate energy in which they were created. They’re neither photo-realistic, nor cartoon or caricature. Instead, the subjects appear amused and disarmed, visibly pleased at the delight of this unexpected airport encounter and inevitably excited to be both engaging with a friendly face at the often-impersonal transit spot and embarking on a new adventure or returning home from a business trip.

You may have seen Tobey Fraley’s Robot Repair Shop and assorted other installations throughout the space, but that original artwork is created within the airport–expressly for exhibition there–may come a surprise.

In fact, Pittsburgh International Airport has an arts and culture manager (Rachel Rearick) and the Office of Public Art has a project manager (Derek Reese) who works in the space. PIT is among a very small group of international airports that support a full-time artist-in-residence program, complete with studio space at the terminal.

Ervin’s “air portraits” were created through the Art in the Airport program, which makes regular  calls for artists that provide visual art for several different display areas in the facilities as well as weekly live performances.

Kirsten Ervin at the estimated times of art board [photo: Pittsburgh International Airport]

Full disclosure: Pittsburgh Orbit has thrown out all journalistic integrity on this particular post. Kirsten Ervin is more than just some artist whose project we like. Over the years, she’s been a contributor, editor, and sounding board for the blog. Oh–and “Mrs. The Orbit” is married to one of our junior reporters.

That said, it’s safe to say we’d jump at reporting this story even if we weren’t living under the same roof. Kirsten’s excitement at engaging with strangers is infectious, as is her desire to skip the politics and get down to what’s really important–making connections between human beings. If that’s not what art–let alone air travel–is all about, well then maybe we should all just stay home. 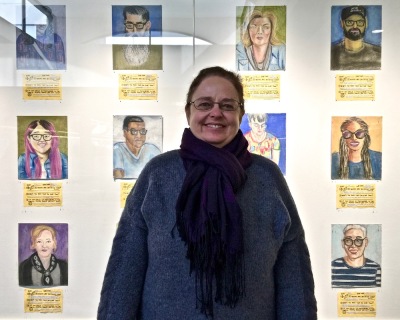 The Passenger Portrait Project will be up through late February, 2019. If you’re traveling by aeroplane between now and then, do yourself a favor and leave an extra few minutes early to check out the full display for yourself.