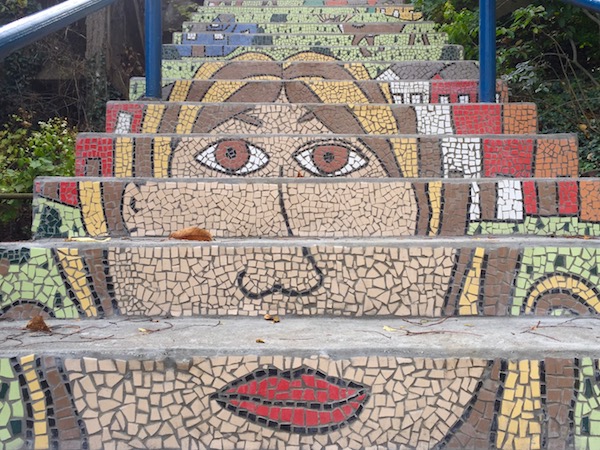 It’s a cruel reality: when you’re working the city step beat, there ain’t a lot of news to report. No, most of the stories we run end up being about going to visit steps that inevitably won’t be around for long, occasional Indiana Jones-style heroics to hike them, or the historical curiosities of infrastructure ruins that were once so vital and now–all too often–go nowhere and serve no one.

So it is with no small amount of glee that The Orbit goes to press with a story on not only the complete rehabilitation of a set of core city steps, but the genuine newsy news that they’ve been wonderfully dressed-up in brand-new full-color mosaic tile.

Oakley Way is one of the many climbs that create access points from the South Side Slopes above to the flats below (and vice-versa). The street is actually seven short (but mostly vertical) blocks long–part city steps/part steep road-with-steps sidewalk. The bottommost stretch (from Josephine to McCord) is the only section that’s received the mosaic treatment, but some of the upper sections have also been nicely rehabbed with patched concrete and fully repaired and repainted blue handrails.

Artist Laura Jean McLaughlin led a group of volunteers in the design, construction, and installation of the mosaic risers. That process was covered in a recent Post-Gazette piece that only scooped us because we got side-tracked by Fairywood and tryptophan and shelved the post for a month. Fooey!

Looking up: the Oakley Way steps

Spread across seventy-seven consecutive risers, the mosaic’s central figure is a tall red-booted woman in a checkered skirt who–based on the proportional size of the river, bridge, and factory building also in the piece–must stand about the height of the US Steel tower. Also decorating the lush scene are Slopes homes, grass, flowers, a fox, a bird, the sun and stars.

If you’ve seen any of McLaughlin’s other local projects you’ll recognize her loose, cartoonish, and earthy signatures. A lesser blog might invoke the term “whimsical,” or even (shudder) “funky”. The Orbit won’t stoop to that level, so we’ll just say they’re fun, very Slopes-centric, and a great compliment to the D.P.W.’s fix-up work. 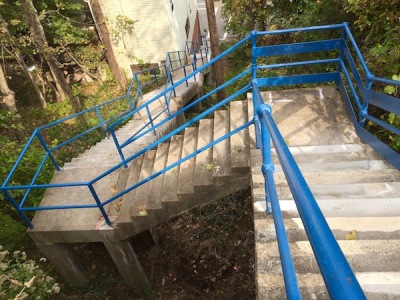 View down the bottommost section of Oakley Way (from McCord Street)

We’ve argued in these very virtual pages that Pittsburgh’s network of public steps is a city asset unlike any other–part transit route, part jungle gym, part historical oddity, and what should be a big draw for tourism*. It’s encouraging to see any set of steps getting much-needed maintenance, but it’s especially great to see them dressed to thrill with such a wonderful addition as McLaughlin’s mosaic.

There’s at least one other similar project out there and completed. Linda Wallen’s mosaic work at the base of the steps off Itin Street in Spring Garden isn’t nearly as ambitious as Oakley Way, but it’s still a great twinkling beacon in the great constellation of city step dark stars. May these two heroic projects guide step freaks to a new, golden dawn of altitude adjustment, wide perspectives, and throbbing calf muscles.

Old and new: remnants of an earlier, defunct passage under the rehabbed Oakley Way steps

* Visitors who don’t want to lose their breath climbing dozens of flights of steps to dilapidated neighborhoods with spectacular views should consider lodging other than Chez Orbit’s fold-out sofa.