The sad toys of “The Killing Fields”, Homewood South

Against deep blue sky and thick green long-overgrown grass, the fuzzy little bodies pop from the chain link fence they cling to. Tigers, monkeys, floppy-eared dogs and bunny rabbits fill the ranks, as do a lion, zebra, and giant duck. We didn’t know dinosaurs could be cuddly and furry, but there’s one of those too.

Overwhelmingly, though, the majority in this population is the teddy bear. Dozens of bears hang from the fence and nearby telephone pole: in a bow tie and with a Valentine’s heart, dressed in a Scotsman’s plaid and with matching Christmas hat and scarf, still buoyantly wide-eyed awake and drooping limply with the weight of the world.

The long, east-west alleys of Homewood are, like many sets of children born to the 1970s, group-named with a common initial letter: Ferdinand, Fletcher, Fuchsia, Fielding, Forest, Felicia, Fleury. Heading south, the very last of these–before you cross Hamilton Avenue and both street grid and naming scheme change–is Formosa Way.

The little alleyway is typical of many old Pittsburgh backstreets–a single lane, weedy, cracked, and stained with decades of practical use and a typically low seat on the Department of Public Works priority list for maintenance. Formosa Way runs parallel between Kelly Street and Hamilton Ave. and (at least at one time) was the main entrance for many row houses that fronted the alley for blocks in either direction. 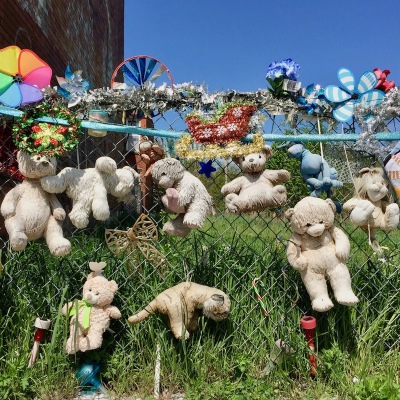 All things considered, the 7300 block of Formosa Way looks a whole lot better than many Pittsburgh alleys. There’s next-to-no litter, nor signs of illegal dumping. The backyards of the row houses facing the adjoining streets may be untamed, but are now lush, tall-grassed expanses that bring welcome deep green open space to what at one time must have been dense blocks of brick worker housing.

What’s not so expected is the stretch of thirty-some feet of chain link fence, now bordering an overgrown vacant lot, plus one service pole across the alley. Attached to the intertwined steel strands and lashed to the wooden pole are scores–a hundred or more–soft children’s playthings along with assorted pinwheels, holiday decorations, and Christmas garland. These tributes have clearly been here for some time: their synthetic fur is matted, gnarled, and bleached white in years’ worth of sun, rain, frost, and thaw.

It’s a strange realization that the small patch of earth one has bicycled-through mere hours before is known locally as The Killing Fields…or, at least, it was at one time*. That particular name arrived during the crack-fueled gang violence of the 1990s, but persisted (we understand) until quite recently. Right here at Formosa and Collier, several blocks of derelict housing were razed in 2012*. A short set of five boarded-up row houses immediately adjoining the fence appear headed for the same fate.

That said, on this fine, bright sunny Sunday early afternoon, the blocks around Formosa Way feel much more like the Sunday-go-to-meetin’ fields or the wash-the-car-with-the-radio-on fields. Those activities, along with stoking up big barrel charcoal grills and neighbors swapping gossip on front porches are the most obvious occupations to the peddle-by blogger. 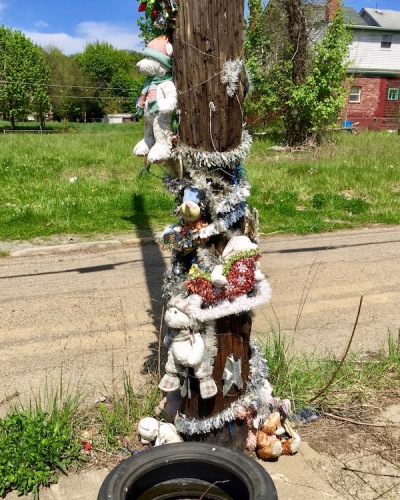 No label is attached to the fence of sad toys, there is no description for the installation, and attribution for the collection is not given. But what’s here seems obvious enough for even the densest of outsiders to put two and two together. This pair of diametrically-opposed and inseparably-linked events–decades of street violence and the impromptu memorial to lost innocence–say so much about the deep loss generations of Homewood families must have felt.

If each stuffed animal on the Formosa Way fence represents just one casualty in the neighborhood’s struggle, it is a weight no single community should have to bear. It’s more likely that not every victim received a tribute here–that a suitable memorial may need to be twice, three or more times greater to accurately represent the actual loss. For now, we can only hope the collection of playthings stops right where it is.

Final note: While most Pittsburgh Orbit stories sit just fine in the quasi-legitimate world of “speculative journalism”, this one does not. It’s crying out for more information from the Homewood community, the creators of the fence, residents of Formosa Way, etc.–we know this. Time and schedule wouldn’t allow that kind of “real journalism” for this week’s post, but we absolutely plan on continuing the story.

If you live in Homewood or have information on the Formosa Way fence, we would love to hear from you. 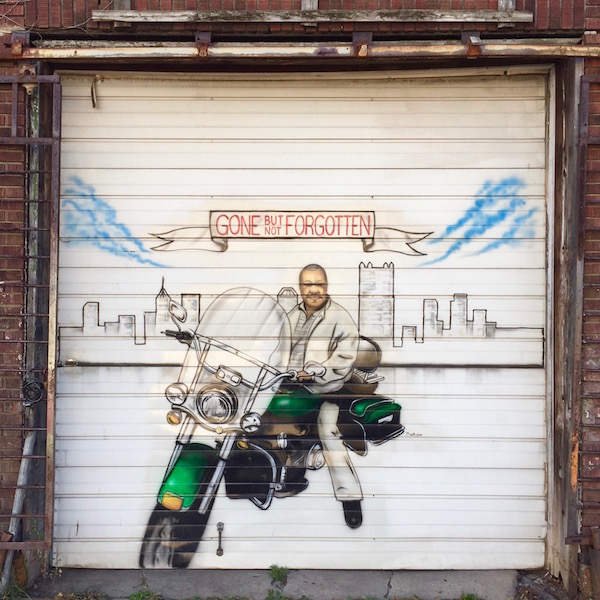 Gone but not forgotten, Homewood

Is the Pittsburgh skyline that distinct? This blogger wouldn’t have thought so, but it kept turning up, rendered by hand, in a variety of locales. The image is an interesting choice, especially for some obvious small time players. It’s there on a shuttered candy shop, a no-longer-serving Chinese restaurant, and a tribute to a fallen motorcyclist. [Note to self: cancel appointment to have Pittsburgh skyline tattooed across midriff.] 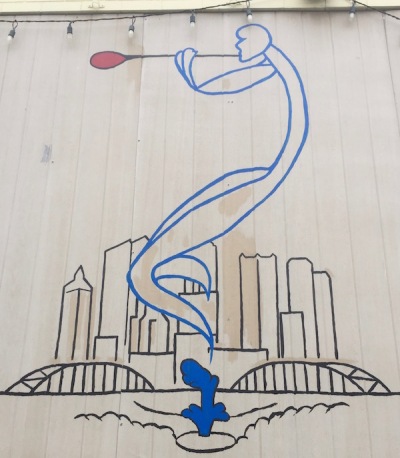 The loose outline of a great glass-blowing water spirit floats weightlessly in front of a rough depiction of downtown’s tall buildings. It looks like Matisse, as rendered by a precocious fifth-grader. This lanky figure seems to spring from a Smurfs-like version of the Point State Park fountain. Earth, air, fire, and water: all the elements are there. The mural pictured here is actually just one half of a set–its nearly-identical twin faces the other direction and sits just on the other side of Gallery G’s front entryway on Liberty Ave.

We loved this combination Pittsburgh portrait/ornate Steelers tribute/Candy Store business sign so much we ganked it for the Orbit masthead. The skyline has all the usual players, but here they’re rendered in a really effective semi-detailed black & white, resting on a set of rococo brass work, and reading brilliantly against the pitch black background. Maybe if Cutty had made the text as easy to read the candy store would still be in business and we could have popped in for some licorice on the ride. That was not to be.

We’re gathering the materials on the inevitable Orbit obit to Yen’s Gourmet (R.I.P.) on Penn Avenue and this one popped-out. The long brick wall that makes up the east-facing side of the building has one continuous mural of a congenial, multicultural East Liberty. Bathed in sunshine, people of all stripes walk the streets, curb their pets, shop, and frolic. There is at least one incongruous wolf (maybe it’s just a husky) with its eyes trained on you, the viewer and its tongue salivating. It is both painful and totally fitting that this portrait will never include the greatest elements of change in a rapidly-gentrifying neighborhood that would ultimately send Yen and his $6.95 all-you-can-eat buffet packing*.  Likely the new Ace Hotel does not have such a deal. 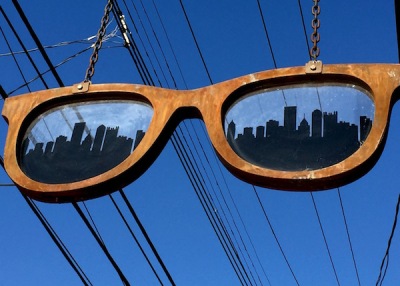 This is almost certainly the newest skyline around as Chromos only took up shop in Lawrenceville’s tenth ward fairly recently–but how great to keep up the tradition and what an effective use of the idiom! One giant pair of glasses serving as this eyewear shop’s name-free shingle, each with a silhouetted downtown Pittsburgh skyline clearly in view. Real glass allows daylight through the rest of the lenses just like, you know, real glasses. Well done, Chromos.

* Just guessing here: we have no idea why Yen’s Gourmet closed their doors.

Watch that first step: it’s a doozy. “Jesus is the answer,” Homewood

He measured it on the four sides; it had a wall all around, the length five hundred and the width five hundred, to divide between the holy and the profane. (Ezekiel 42:20)

Back in the early Spring, we inaugurated the Two Great Tastes series with a piece on how snow and trains just naturally look (and photograph) great together. We also included a bunch of other pithy two-fers involving things like French cop movies, Zubaz, and fried fish sandwiches. This blogger certainly can’t predict when another one of these terrific combos will come along, but believe you me: The Orbit knows it when we see it.

And see it we did! Or do. Or keep on seeing as we come across the seemingly incongruous one-two of (Christian) religion and street graffiti. It might seem weird to take up both scripture and Rust-Oleum, but, you know, it’s the greatest story ever told and these colors, like true faith and decent exterior enamel, definitely won’t run.

Generalizations about entire musical genres aside, it’s hard to understand the connection between the relative quality of rap music and the commandment to attend church. We know correlation is not causation as one might just as inaccurately assume spray paint-wielding taggers would be unlikely in a house of the lord on Sunday.

Is God dead? Is The Devil really everywhere? At least one troubled soul sure felt strongly enough about it to render this haunting message in black Sharpie on the stair rail of the great Holy Spirit Parish Catholic church in Millvale. We have to assume that, like the song says, “people are cracking up all over.” And when reaching out to the mental health system involves vandalizing church property, well…we’ve still got a ways to go.

Another questionable assertion, this one on a boxcar in the Strip District. I don’t know if Jesus rides freight trains, but they’re probably more reliable than AmTrak. That said, if Jesus really wants to commune with the in-transit laity there are going to be a lot more of them on the Greyhound or MegaBus (not to mention the DMV). And let me tell you something: some of those bus riders could learn something from a good ol’ monastic vow of silence! 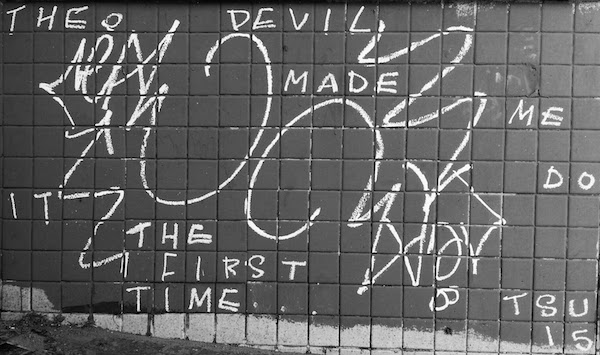 Out on the tiles. “The Devil made me do it the first time …” Lawrenceville

So many questions: What is it? Who made you do it the next time? How many times did you do it? Did you ever get tired of it? Why do I need to hear about it? We’ll likely never know what TSU was going on about here, but hopefully admitting it was a least a first step to reaching a better place.

He would / Die 4 / U. “What if the only things God blesses you with tommrow is what u r thankful for today,” (sic.) Manchester

The Orbit‘s copy-editing team is having a fit with this one, but relax, guys: everything’s cool. The suggestion (we can’t actually locate a Biblical reference for this one) that the salvation we’re waiting for in the future is here right now strikes this frequent grass-is-greener blogger as actually quite profound. The statement speaks to both live for today and be grateful for what you have sentiments, and also that the (presumably) afterlife-believing perpetrator wants us to be happy, right here in this world. Amen.