To call the tiny neighborhood of Duck Hollow “cut off” is an understatement–there is only one way in or out. A short unnamed one-lane bridge spans the point where little Nine Mile Run creek spills into the river and acts as the sole gateway for motorists and pedestrians alike. The creek wraps around the neighborhood’s north and west sides; above it up the hill sits the suburban-feeling slag heap redevelopment Summerset. To the east, there is a steep hill and thick wood.

One way in, one way out. Bridge to Duck Hollow.

“Just enough” is as subjective as terms come. It’s probably fair to say that for many fellow Pittsburghers, Duck Hollow wouldn’t really feel like city living. Those with a healthy penchant for walking can leg it up the 3/4 mile hill to reach the strip mall-like IHOP/dry cleaner/Hokkaido Seafood Buffet complex on Browns Hill Road, but there are no commercial buildings in Duck Hollow proper, nor is there evidence there ever were. We counted eighteen total houses (plus a number of freestanding garages, sheds, and outbuildings). What does that add up to–maybe sixty or eighty people at most?

The garage cherub of Duck Hollow

We’d heard tale of winter seagulls taking up residence in our fair city, but never having crossed paths with them, it felt a lot like urban legend. Well, it turns out Duck Hollow in January is the place to catch them.

Vastly outnumbering the human population of the neighborhood–not to mention the sizable collection of the hollow’s namesake ducks congregated on the loose riverbank–seagulls do their seagull things: standing around together all facing the same way and then getting excited and all taking to the air at the same time, singing their seagull songs.

I was told by more than one fellow bird-watcher these are “Lake Erie gulls” who fly south every winter when it gets too cold up there. Considering the particular non-winter we’re in, it seems like maybe they’re working off a calendar rather than a thermostat. Either way, we’re glad you guys made the trip down. 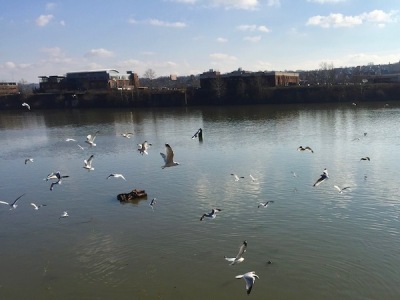 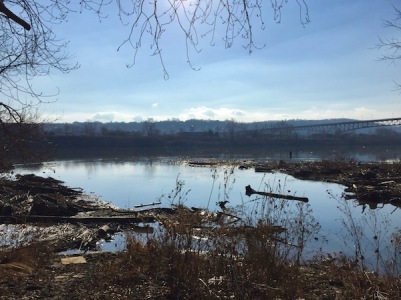 Though small, Duck Hollow is not without its cultural amenities. There is an extremely high participation in lawn decoration–light-up deer, ceramic angels, cherubs, baubles. Figurines must outnumber people by a large margin. During our couple visits–the first on New Year’s Day and then again mid-January–the Christmas decorations, candy canes, and polar bears were out in full force.

A well-tended vacant lot sits at the center of the neighborhood and one imagines it as Duck Hollow’s town square. The rectangular plot features a flag pole that held no banner but does have a nice pole-sitting Mary statuette guarding its base and blessing The Hollow. Opposite is a strange arrangement of large river rocks topped by a discarded tire; the whole assemblage has been placed just-so and painted white. This blogger doesn’t know what he likes, but he knows art–and he thinks that’s what this might be…maybe.

Duck Hollow doesn’t even appear on the city’s list of officially-defined neighborhoods*. That’s probably because it’s just too small to qualify, so they’ve likely bundled it in with one of its nearest neighbors–presumably Glen Hazel or Greenfield.

But it is so not either of those places. It’s just too physically isolated–down the long twisting Old Brown’s Hill Road, through the Nine Mile Run green space, over the bridge. That seems like a long way to go when you’re still well within city limits. But then again, maybe it’s just enough.

* This hasn’t stopped Pittsburgh Orbit from including it as unique entity in the 90 Neighborhoods list/project.