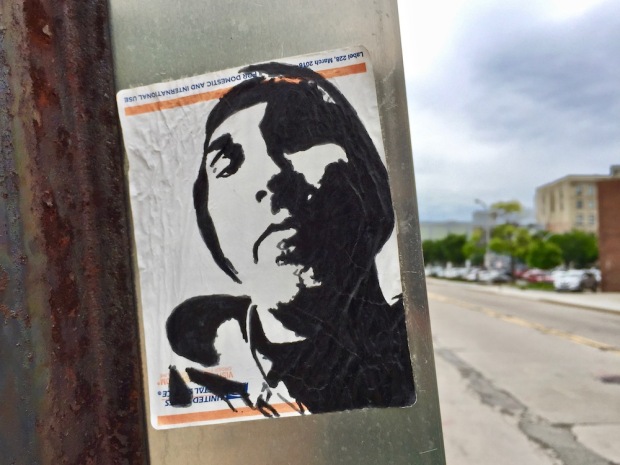 It’s all there: the non-plussed selfie stare, the upturned ball cap, the all-contrast Sharpie-on-postal label execution. Super fans already know where this is going, but for everyone else, these are the tell-tale traits and hallmark style of one of the city’s more mysterious and elusive serial street artists.

When last we reported on the mysterious Cap Man, in the fall of 2017, it was with the strong accusation that “he’s likely left Pittsburgh entirely.” That may have been true–the backsides of the East End’s street signage and utility poles remained remarkably free of the behatted one’s visage through all of last year.

Well, he’s back, emerging some time in the late winter/early spring–slapping his little original sticker artworks on city infrastructure throughout a contiguous swath of East Liberty, Friendship, and Bloomfield. And this time…well, he’s fooling around just as much as he ever did. 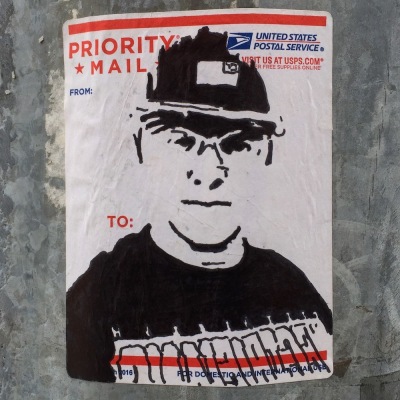 One of the assumptions made in prior stories was that Cap Man (the artist) was the author of both the Cap Man (the subject) (self) portraits and the similarly-styled “rogue’s gallery” drawings of (in)famous celebrities, media notables, and true crime figures.

This theory is only bolstered by the simultaneous re-emergence of these types of drawings, inevitably committed by the same hand and distributed within the same vicinity as the Cap Man portraits. This time around, we can only positively ID slain rapper The Notorious B.I.G. aka Biggie Smalls, who arrived on a Bloomfield utility pole some time in the late winter or early spring. The recent offerings also include a dripping skull, a message of peace and love, and a couple renditions of one “Fro Bro.” 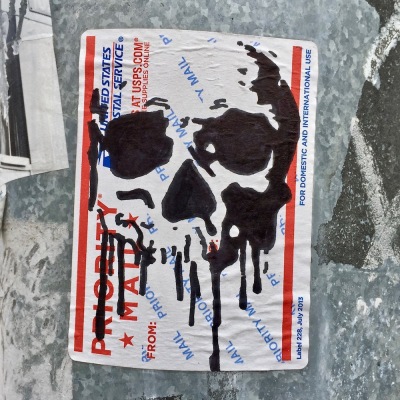 Peace, Love, and a bunch of other stuff, Bloomfield 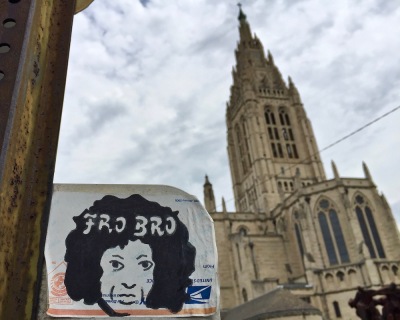 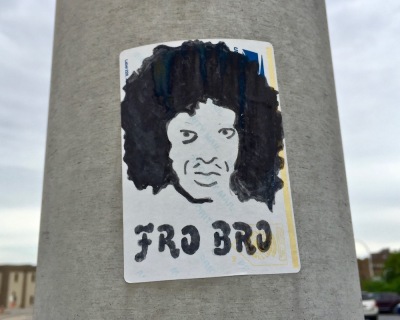 Finally, a legit street art miracle. Co-assistant to the mail room intern Lee Floyd spotted this loose, perhaps unfinished, drawing of a young woman on a Liberty Ave. pole after we’d snuck in one last Lenten fish fry on Good Friday. (See below.)

The figure’s head is turned to the right, her long hair unruly and wind-blown across her face. One eye is obscured, but the other stares with steely unease right back at you. It ain’t the Mona Lisa, but as much could be supposed on that head position, that glare as anything people read into Da Vinci’s masterpiece.

So, imagine our surprise when mere days later the crew is on a rainy day stroll down Baum Blvd.–nearly a mile from the original light pole–and there she is again. Divorced from the steel pole and lying on a soaking wet sidewalk is … the same woman! Not just the same subject, but the same drawing!

Now, how that sticker came off one light pole completely undamaged and worked it’s way a mile down the road just to find the only two pair of people in the world who would care about it is something we have no explanation for–but it’s a doggone miracle!

If that’s not enough positive juju, coincidental mojo, and lightening striking twice for you, I don’t know what is. Most people have to steal their parent’s HBO password to get that kind of drama, but Cap Man is offering it to you for free, right here on the street.

Background on the continuing saga of Cap Man:

Cap Man has left the building.

More accurately, he’s likely left Pittsburgh entirely*. The possibility also exists that the young “postal slap” artist who decorated the lamp posts and traffic signage of central Oakland over the past year has just moved on to another less public hobby. But we doubt it. 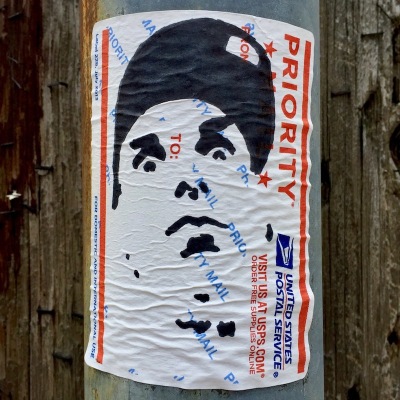 Let’s back up. Over the summer, we reported on the serial application of hand-created Sharpie-on-postal label artworks throughout the greater Craig Street and Forbes Ave. area of Oakland. A lot of folks use this medium, but few work in portraiture. [See “Going Postal: Cap Man Fever”, Pittsburgh Orbit, June 11, 2017.] These little sticker pieces were committed by an unknown, anonymous artist who appeared to be (perhaps overly) obsessed with literally plastering his face all over town.

No sooner had we published our second, tangentially-related story [“Going Postal: Rogues Gallery”, Pittsburgh Orbit, July 30, 2017] than a new salvo of Cap Man (self-)portraits began appearing, including a nice run down mostly-residential Neville Street in Oakland.

The image was unmistakably our guy–the same upturned, tagged, and jauntily off-center ball cap; the same flat expression and deep-seated eyes on a familiar young white guy face–so we bagged them. [Observant Orbit readers will note our photographs are from a point after some heavy mid-summer rains soaked the stickers thoroughly, leaving the dried artifacts crinkled, but still color-rich.] Then we waited for more…and waited…and waited.

But, as we learned from the years counting the seconds for Chinese Democracy to drop, there’s a point where it’s healthiest to just let go. This then may be a final goodbye as well as a thankful tribute to Cap Man. For whatever brief period, he made the sidewalks of Oakland a little more interesting and the art of the postal slap a little more creative.

So what’s become of Cap Man? Our original hypothesis–a Pitt student who slapped his way across Oakland in the daily commute from a bus stop on Fifth and/or Craig Street to his campus classrooms–still holds water. Perhaps even more so, considering the termination of the ink portraits roughly coincides with the end of the university’s summer term.

That said, it’s safe to say there’s a fair chance we’ll just never know what was up with this dude. Cap Man may well have taken his business or computer science degree back to Philadelphia,  New York, or Washington, D.C. and is now safely installed running the numbers or pushing digits far from the telephone poles of central Oakland and the bus shelters of Bloomfield. Hopefully he’s still got his collection of Sharpies and they’re not just used for addressing large packages and system diagraming on large conference room brainstorming tablets.

Wherever you are and whatever you’re up to, godspeed, Cap Man.

* A little gender assumption here, yes, but as explained in the earlier post, Pittsburgh Orbit believes these are self-portraits of a young man.

Tiny one-of-a-kind artworks decorate a bus shelter, steel light poles, a cross-walk signal, and the back sides of street signs. Pictured on them are the faces of fading-from-memory pop culture figures, a couple buxom babes, and a kind of high school outsider iconography we hope is never lost. More than any other subject, though, are the bad guys.

The little ink portraits, drawn in heavy black felt tip on repurposed U.S. Postal Service “228” sticky-back shipping labels, are never signed. That said, the common medium, subjects, style, and presentation locale, lead us to believe they’re all the work of a single actor. The fact that new pieces just stopped all at once earlier this year suggests the artist has moved-on–either to other media or, more likely, literally out of the greater Bloomfield-Oakland area where all these examples were spotted.

We don’t know who did these, but we’ve watched enough Luther and The Fall to consider ourselves well-prepped for psychological profiling. The subject matter here–kitschy demi-celebrities Gary Coleman, Rodney Dangerfield, and Moe from the Three Stooges, the skull-and-headphones of a Hot Topic silk screen, and criminal anti-heroes like Al Capone and David “Son of Sam” Berkowitz–just feels a little too on-the-nose to deny. We’re definitely making an assumption, but this is the work of young man. 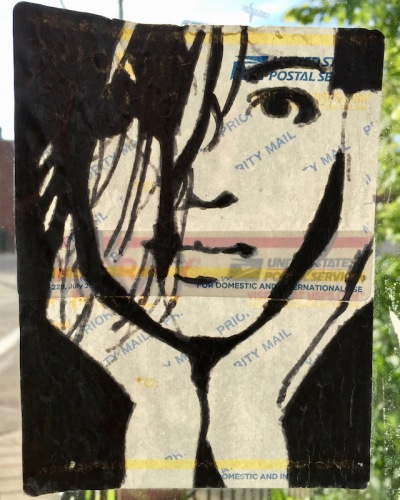 The other thing we’ve got on this theory is “Cap Man“. Our story on the string of (apparent) self-portraits committed in awfully-similar medium and style ran earlier this year. In that, we saw the same “postal slaps”–also penned in black Sharpie, stuck to street signs in the vicinity of Craig & Forbes–very close to all of the Oakland specimens here. The Cap Man drawings, however, are not based on previously-published photos, but rather appear to be self-portraits of a young, white, ballcap-wearing male.

What became of Cap Man? In the earlier piece, we theorized that he’s a bus rider, taking the 54C from Bloomfield to Oakland–perhaps even drawing his portraits right there in the back seats, his telephone and Google Images as visual reference, one-a-day on the short 10-minute ride.

If so, his destination was likely central Oakland and Studentland, U.S.A. If so, he’s got umpteen different explanations for taking his big markers home for the summer and allowing the post office to restock its supply of blank shipping labels. Maybe–just maybe–Cap Man will return for another season of infrastructure decoration in the fall. 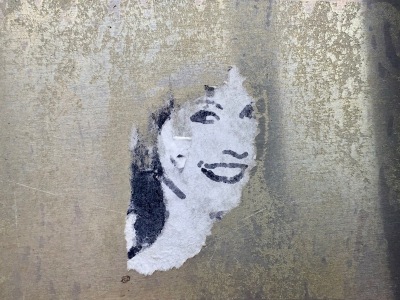 The ball cap is cocked high, resting on the back of the head at a jaunty just-off-center angle. Its bill is pure black, minus a small rectangular label on the inside brim. When you can see the man’s eyes, they stare directly back with a cold, dispassionate expression. More often, though, they’re shrouded in the heavy shadows cast by his supraorbital ridge.

Cap Man–our name for this anonymous figure–is the subject of a series of tiny artworks currently on view for a limited time* in the general vicinity of Craig Street and Forbes Avenue in Oakland. You’re going to have to work a little to find them. 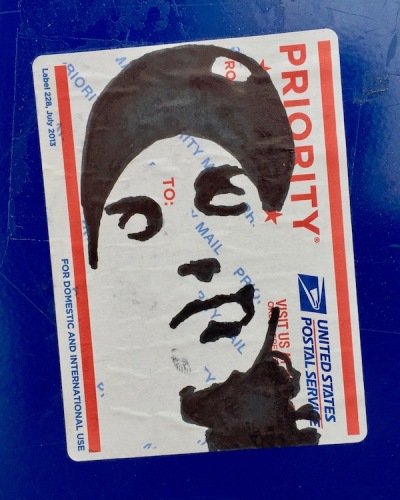 Both the medium and presentation for the Cap Man portraits are as DIY and proletariat as they come–thick black felt tip ink drawn on repurposed U.S. Postal Service “228” priority mail labels. The little stickers have been peeled off and applied haphazardly to a free publication bin, an electrical box, street poles, and–clearly the venue of choice–the back sides of metal street signs.

Cap Man’s creator certainly isn’t the first to use this medium. Alternately going by the general term sticker art or the more specific postal slaps, you’ll see similar pieces littering mailboxes and light poles all over the city and (apparently) across the country. Typically, though, they’re filled with either bright big-lettered tags that look like studies for future spray paint work or blunt messages like the series of FUCK TRUMP stickers around town. The Cap Man original ink portraits are something a little more interesting.

We don’t know who this person is–either artist or subject. It’s probably safe to assume, though, that the two are one in the same–self-portraits of a young man on the move. The angle of the image seems to suggest the artist is working from a lap-held mirror, or (more likely) his phone.

A theory: The proximity of where the stickers have been left suggests the possibility the perpetrator is riding the bus to Oakland, getting off at Fifth & Craig (or thereabouts), and then tagging the first bare surface he or she encounters on the ensuing walk down Craig Street and around the corner, heading toward the museum maybe, or Pitt.

In this scenario, the drawings may even be inked right there in the aft seats of the 54C or the 93A, a daily discipline perfect for the 10-minute hands-free commute. The shaky nature of this workspace would also help to explain why a couple of the portraits are clearly off–as if the otherwise competent hand that drew them was jostled mid-stroke…but this may just be a romantic pipe dream from a blogger who reads too many detective stories. 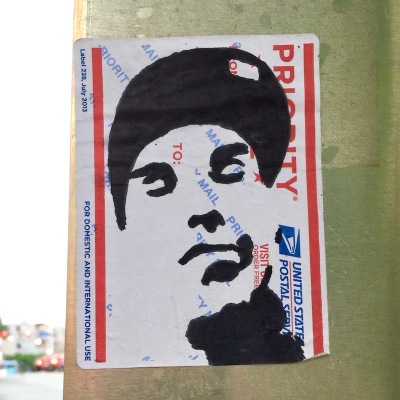 Let’s face it: ball caps look pretty dumb on anyone who’s not either twelve years old or actively playing baseball at that moment. That said, we’re glad Cap Man has given his stark two-tone/big negative space portraits something distinctive to, uh, hang his hat on. As a visual element, it makes his head stand out, provides structure, and frames the top of the drawings. It also provides a nice thematic grouping for the current exhibition in Oakland.

We suspect Cap Man’s old-school selfies aren’t the only street-facing work of this artist. Bloomfield is currently host to another pretty distinct series of postal slaps that look like they may have come from the very same hands. That, however, is a subject for another post on another day. Until then, a tip of the hat to you, Cap Man, it’s been a good time finding your tiny pictures. 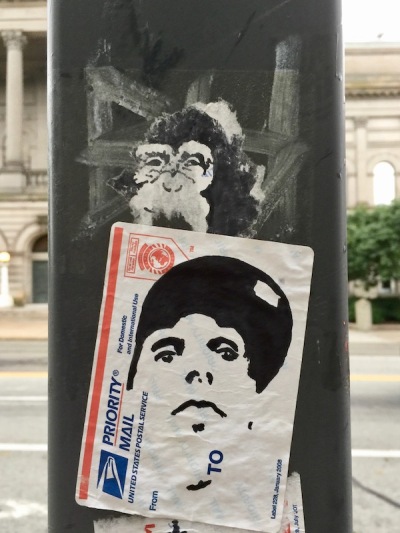