Penny Mateer with one of Pole-2-Polls’ handmade “Vote!” yard signs

A large table is covered in distinct, ordered piles. Scraps of fabric are chosen from every imaginable eye-popping design–striped and polka-dotted, neon pink and electric orange, fuzzy patterned and criss-crossing plaid. The selected swaths are inspected, stenciled, marked-up, and cut out with fabric shears. Final shapes are stacked in neat towers that form the distinct 3-D message V-O-T-E.

“It’s our power. It’s our voice–we can’t afford to waste it,” says artist and activist Penny Mateer of the group Pole-2-Polls, “Democracy is not a spectator sport. It’s our civic duty. People have died for the right.”

It, of course, is the simple act of voting for elected officials. The right to cast one’s ballot is the absolute bedrock of democracy; participating in biannual elections is every (of age) citizen’s bare minimum civic engagement. 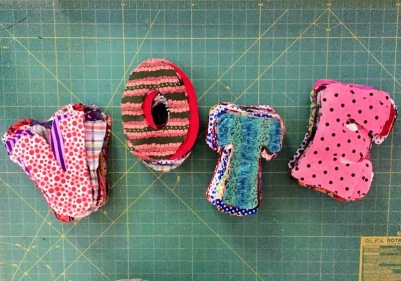 But–you know where this is going–the number of eligible voters who actually show up on election day is depressingly low.

In 2016 , just over half of the country’s electorate [55.4%, according to CNN] cast votes for the big one–the next president of the United States. Pennsylvania, along with other “battleground” states, clocked-in slightly above average [we had 61.26% in 2016, per Statista]. Four out of ten voters in super-important media-saturated Pennsylvania still don’t care about who will become president? It boggles the mind.

When it gets down to primaries at the state and local level, the numbers drop off the cliff. I couldn’t locate an exact figure, but multiple sources have Allegheny County turnout for the 2018 May primary at “around 20 percent.” Ask the Costas if midterm primaries matter. 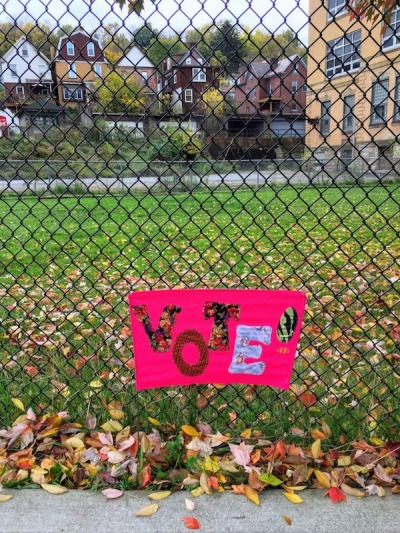 Pole-2-Polls began before anyone was talking about Access Hollywood, me too, Stormy Daniels, “The Mooch,” or Bart O’Kavanaugh. In 2013, the amazing–and completely non-political–Knit the Bridge project had gone up and come down over the course of one magical month at the end of summer. The organizers cleaned and donated the large, blanket-sized knit and crochet panels to homeless shelters but were left with miles of black acrylic yarn used to coat the railings of the Andy Warhol Bridge, downtown.

So in advance of the 2014 midterms, an informal group–many fiber artists, all “excited about positive action”–met to recycle the material into yarn-bombed banners. The creations would go up just prior to the November election, temporarily attached to utility poles (hence the group’s name). The message would be simple, non-partisan, and direct: VOTE!

For 2016, the group changed their medium to fabric. Bulk-purchased at the yearly Salvation Army sale, the oddball hard-on-the-eyes, itchy-on-the-skin patterned polyesters would likely find few more appreciative homes. In the hands of Pole-2-Polls group members and volunteers, cloth is transformed into the ubiquitous political yard signs we see every October–just with a lot more love and a lot less detail to remember.

“We’re not political scientists,” says Penny Mateer, “but any reminder of voting is a good thing. It’s good civic engagement. We’re makers, we love to make stuff. It’s a combination of the making and making it together–if you come [to one of the group Make a Sign, Take a Sign events] you can see for yourself.”

I did come to the October 6 event and while I stupidly didn’t budget enough time to actually, you know, “be helpful,” I can tell you it’s a fun group and a great feeling to make something.

In addition to the group’s informal Make a Sign events, Pole-2-Poll has engaged with students at Duquesne University for a set of workshops and inspired offshoot groups in Montana and California. We should be seeing the fruits of all these efforts on front lawns, highway berms, and porch railings very soon.

This blogger will admit to some skepticism over the ability of such a simple message to transform much larger societal apathy toward the political process. But one also hopes that maybe if instead of the generic red, white, and blue, mass-produced signs we’re used to glazing over every fall, Pole-2-Polls handmade banners offer a welcome alternative. The signs won’t yell at you, but just offer the encouraging suggestion of a good friend: Your voice matters. Vote. You can do it!

Whether we can convince America of it or not, these things are all true. The Orbit applauds Pole-2-Polls and all the other great activists and “craftivists” out there spending their Saturday mornings trying to convince your lazy ass to make one little detour on November 6.

Pole-2-Polls will have one more group Make a Sign, Take a Sign event on Saturday, Oct. 27, 11 AM – 3 PM at the Brew House on the Southside. All are welcome. No experience necessary.

Whether or not you can make it on the 27th, Penny encourages everyone interested to get in touch via the Pole-2-Polls web site, FaceBook page, or Instagram.

Need information on your voting status or a look at the November 6 ballot? There are obviously a ton of resources out there, but the great Vote Save America site is a pretty solid one-stop shop.