Deconstructed building in the graveyard for gravestones

Editor’s note: This story generated no small amount of controversy. After a discussion with the cemetery’s president, we made the decision to update the story, removing certain identifying details for general public safety. Based on the many questions raised by the piece, we responded with the follow-up story “Where Do Gravestones Go To Die?”

The simple grave marker is nothing out of the ordinary. Gently curved and smoothly hewn, the stone is a standard off-the-shelf/out-of-the-catalog mid-century model we’ve seen hundreds–perhaps thousands–of times in different plots over the years. About the size of a microwave oven, it has raised block letters on its face which detail only the most basic facts about the deceased: Frederick W. Zinsser, 1878-1942, Father. 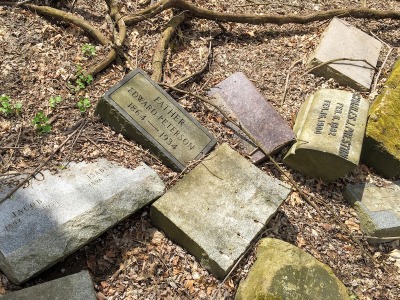 What’s strange about Frederick Zinsser’s headstone is how it arrived in its current position–upside-down, squashed between two felled trees, in a hidden, barren spot just outside the cemetery’s otherwise beautifully-groomed and spectacularly-scenic acres of visiting space. Oh, and why is it surrounded by dozens of other gravestones and stray cemetery infrastructure that appear casually tossed in the dirt like children’s playthings at the call for dinner?

We’re not talking about just a few stones–a pile here and a pile there. No, the graveyard for gravestones is extensive. It’s a big, basin-shaped open area just downhill from the older side of the cemetery. By now–in early May–you probably wouldn’t even notice it. But when we visited on Easter Sunday the thin shroud of young trees hadn’t yet fully sprouted all its leaves, allowing this unsightly broom closet of quickly-tossed granite to be impressively available to the passer-by.

The stones didn’t just get dropped-off yesterday. They’ve got several years worth of viney overgrowth climbing in, on, and around the various pieces; a number of fall seasons’ downed leaves mulching their bases. 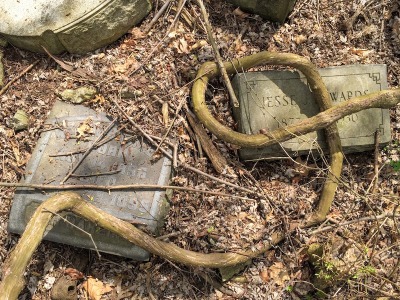 In the head-heart continuum, we tend to want the cemetery to be the final place where one may rest in peace…forever. We also know that nothing actually lasts that long. Most of the time, for good or bad, we won’t have the chance to confront that reality. But seeing dozens of (literal) set-in-stone, lifetime memorials uprooted from their primary locations and dumped in a strange public-private boneyard junkyard makes it all the more obvious.

We don’t know why these gravestones were uprooted or why the cemetery has dumped them so casually right in the middle of the property. The Orbit maintains a strict “don’t ask, don’t tell” policy toward clarifying these matters, preferring to speculate and wonder over the cruel realities of truth.

That said, it seems like a strange business move for the marketing side of the cemetery. Will customers really want to buy that plot seeing the downed markers so nearby? And–assuming there are legitimate, practical reasons for the markers’ removal–why can’t the grounds crew at least put the retired stone in some kind of relative respectful order? 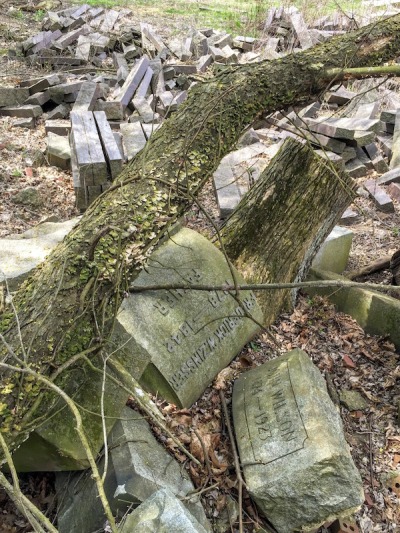 We imagine the current market for used gravestones is pretty low. That said, there simply must be more interesting uses for this substantial supply of unique historic, hand-cut, and incredibly-durable pieces than just sweeping them under the cemetery’s rug of fallen leaves.

The stockpile could absolutely be turned loose for artists to work with, used to decorate public spaces around the city, or recycled by monument makers into new graves. Speaking from experience, those of us who haunt the cemetery and ponder how the whole thing works would appreciate an educational display explaining how and why all these elements ended up displaced from the humans they once memorialized.

For our purposes, however, it’s a kind of weird disaster cool just as it is. The area evokes something between an Easterner’s imagination of the catastrophic wreckage following a big earthquake and the post-armageddon chaos that seems more likely every day. In zombie-obsessed Pittsburgh, we can picture the living dead rising from their crypts and casually tossing headstones like beach balls at summer concert. Perhaps the whole thing is social commentary: in just a couple months, The North Side can look forward to a similar scene in the wake of Kenny Chesney’s inevitable mid-summer return–only we may end up with more dead bodies around Heinz Field.

6 thoughts on “A Graveyard for Gravestones”