The brick structure is two stories tall, three car-widths wide, with a barn-like gambrel roof. It’s been painted in a striking color scheme of deep black and vivid red. The legit c. 1900 carriage house faces the back alley of one of Friendship’s many stately manses. Across the building’s three sets of big wooden folding doors are a collection of crude, self-administered graffiti publicizing a wild set of existentialist free verse:

Title Six, Article III of the City of Pittsburgh’s Code of Ordinances deals with citizens’ conduct around the ownership of dogs, cats, and other animals. It’s a lengthy tract full of minutia on the expected behavior for pet owners on predictable topics like spaying and neutering; the conditions of kennels and catteries; food, water, and bedding; off-leash exercise areas.

Section § 634.09 deals with sanitation. The first paragraph is as close as we get to detailing the conduct around expectations for dog (and cat) poop: 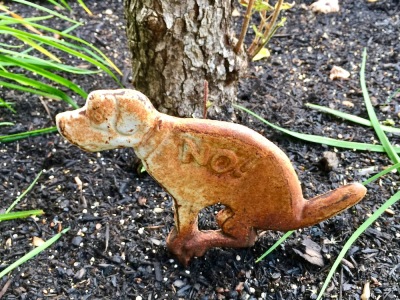 Setting aside any comments on whether cat owners (ahem) ever let Mr. Peeper’s litter box get “thirty (30) percent saturated with urine,” this finely-worded requirement has more gray area than one may think.

Is a dog owner, taking the pooch out on a stroll, required to clean up Fido’s dookie or not? Is every block a dog walks his or her “exercise area”? And if so, “daily basis” suggests a person has a fair window, perhaps as much as 24 hours–or at least until Midnight–to clean up anything left behind on the jaunt.

With no law in sight, the city’s homeowners have become vigilantes of a sort–the sidewalk and front yard their beat; dog crap the contraband flooding the beaches and temping youths into a an amoral lifestyle of loose peeing and rampant defecation. These are The Dog Police.

“Clean that shit up,” Bloomfield

The city’s web site offers a little more information on the For Pet Owners page. Without any specification of repercussions, the site defines the following (among other actions) as “nuisance violations”:

“Please clean up after your dog,” Lawrenceville

One might assume that Rover’s, uh, solid waste would be the primary source on contention here–and that probably is the case–but one would be underestimating the full jurisdiction of The Dog Police.

Dog urine kills flowers reads one dinner plate-cum-public service announcement and it is true that canine pee–in enough quantity–can kill flowers, grass, and other foliage. This seems to be a result of the combination of alkaline pH of dog urine, its nitrogen load, and enough repeated applications–i.e. one or more dogs hitting the same spots over and over. 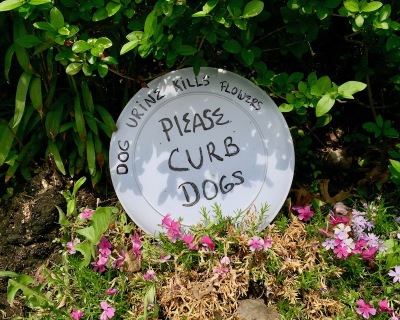 If killing the petunias and turning the grass brown wasn’t enough, The Dog Police work another urban scourge–disposing of Scout’s crap in someone else’s private receptacles.

Take dog poop home with dog reads a hand-painted brick holding down the lid of a garbage can in Friendship; another sign, just a few blocks away, demands Do not throw dog wastes in garbage can or driveway. 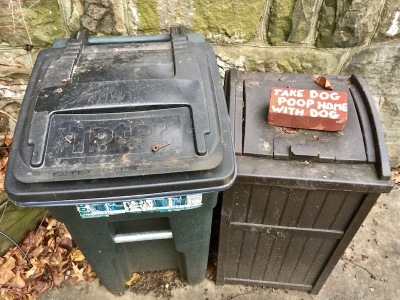 One would think that having the “dog waste” disposed of in the rubbish bin would be vastly preferable to … just about any realistic alternative. But this gets into the “broken window” theory of dog policing–you let them put Ranger’s shit in your 50-gallon Rubbermaid today, they’ll be soiling that tall fescue, asking who’s a good boy? and laughing in your face about it tomorrow. Let’s nip this (quite literal) shit in the bud right now.

“Do not throw dogs wastes in garbage cans or driveway,” Friendship

It’s a cruel world out there. In the face of global environmental catastrophe, absolute political corruption–not to mention each of our own worries about health, economics, and mortality–a patch of stray dog poop or some browned grass can seem mighty petty.

BUT–with dogs, there’s always a big butt–if I was the homeowner repeatedly waking up to a minefield of crap on the sidewalk or my black-eyed Susans murdered in the night by a spray of Fido whiz, well, I’d be pissed-off too. One has to assume you don’t go to the lengths of painting your garage over just one or two stray incidents.

That’s when ordinary citizens feel the need to take the law into their hands. That’s when we call The Dog Police.

“Please be a good neighbor!!! Clean up after your dog.” Shadyside 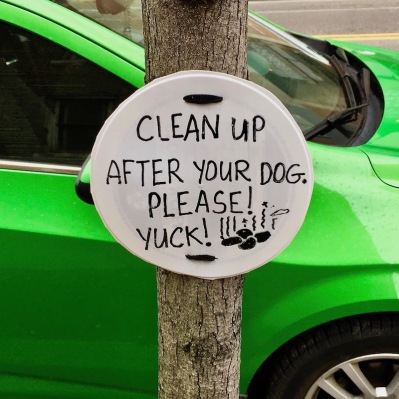 “Clean up after your dog please! Yuck!” Bloomfield

2 thoughts on “The Scoop on Poop OR Hill Street Doo Doos: On Patrol with The Dog Police”