Let’s get something straight: Striking Distance is not a perfect movie. No, the 1993 police drama/action romp has a plot that’s a muddled mess. There’s the hunt for a serial killer, a cop drama, revenge-on-betrayal subplot, and “five generations of police” honor tale–some of them Italian, some Irish, but they’re all family…it’s confusing.

All that would be fine, but there are logical problems big enough to drive a twin-engine Chris Craft through with the river running way above flood stage. In the effort to avoid spoiling the film for anyone who hasn’t seen it yet [and despite everything we’ll say here, we do recommend you see the movie at least once], we’ll not go into all the details–but there are some really important plot points that just don’t make any sense at all.

In a vintage segment from their eponymous movie review show, Gene Siskel sums up Striking Distance as “The kind of warmed-over, generic action picture that really seems tired.” Roger Ebert responds to the narrative inconsistencies by saying “This movie is really stupid because it isn’t even smart enough to answer the obvious questions the audience will have,” and “I didn’t care, because I didn’t believe it.” Ouch!

Q: “Who’s the best cop now?” A: No one in this movie! Robert Pastorelli as Det. Jimmy Detillo. [illustration: Mario Zucca]

And then there’s Bruce Willis. Still coasting on the first two Die Hard blockbusters, the action star arrived on set armed with the same cocky smirk and dumb one-liners John McClane wore out at the Nakatomi building–only this time, they come with an obvious lack of investment.

In theory, Willis is the film’s protagonist–both hunting-for and targeted-by the unseen strangler after suffering devastating personal and professional losses. Even so, the audience finds itself praying some combination of bent cops, river bandits, and serial killers will find a way to silence his wise-cracking and misogyny before they have to white-knuckle it through another inevitable love scene.

In a pair of the genre’s great clichés, The Polish Hill Strangler terrifies the women he’s abducted by driving a remote control police car into their bound bodies and taunts authorities by playing a cassette recording of Sam the Sham & The Pharoahs’ “Little Red Riding Hood” over the telephone. A man was imprisoned for the crimes after questionable witness testimony and a recanted confession, but hard-nosed detective John Hardy (Willis) isn’t buying it.

Sarah Jessica Parker comes aboard (literally–the setting turns to river rescue after Hardy’s demotion from the force) as by-the-book rookie Jo Christman partnered to Willis’ grisled, alcoholic, chauvinist veteran. Of course she’s helpless against his…charms (?) and two end up in the bed on his house boat by the end of her first week on the job. Girl, you can do better! Needless to say, the film fails The Bechdel Test in all possible ways.

No rug needed. Partners Hardy and Christman working the Polish Hill Strangler case. [Note that Hardy has the only copy of “Yachting” magazine in Allegheny County.]

So why do we care about a B-grade genre movie from a generation ago?

Writer-director Rowdy Herrington is a Pittsburgh native who clearly parlayed the success of his Razzie-nominated work on Road House (1989) into a pet project, set in his hometown, and stocked with some significant star power. In addition to Willis and Parker, you’ll recognize character actors Dennis Farina, Tom Sizemore, Robert Pastorelli, etc. as members of the extended Hardy/Detillo clan.

Say what you want about Striking Distance, but the filmmakers didn’t skimp on the Pittsburgh. The local references come early and often–street and neighborhood names; police badges and Pirates gear; great-looking location shots up the hills, down on the water, and wrapped around bridges, locks, and heavy industry. Sally Wiggin and Ken Rice make cameos, playing 1993 versions of themselves anchoring local newscasts.

It’s a shame not a single actor attempts a Pittsburgh accent–which makes the film sound like it was set in Weehawken or Long Island City–but I imagine it would take more industry clout than Rowdy Herrington ever wielded to get Bruce Willis to consult with a dialogue coach. 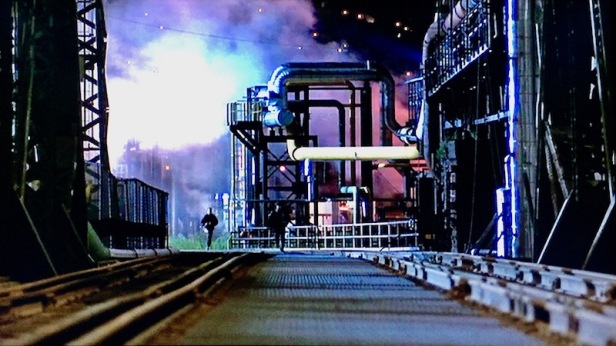 Pittsburgh at its Pittsburghiest. Scene from “Striking Distance” (1993).

If you forget about all those pesky plot issues, relax your standards on “acting,” and acknowledge that you–just like Roger Ebert–don’t care about or believe any of the characters, Striking Distance is a pretty fun popcorn movie. There’s a couple fast-paced boat chases, the pirate takeover of a tugboat shoving a full load of coal barges upriver [hey–it could happen!], high-tension when The Strangler strikes, and raw testosterone when cops and family collide.

It’s the opening car chase, though–a high-speed, cross-city, explosions-and-acrobatics pursuit of an unidentified suspect in an ’89 Ford–that really kicks the film into high gear right out of the gate. Herrington’s mise en scène is nowhere better dealt than in the Hardys’ casual descent down a couple of classic Pittsburgh hillsides–the city playing its own glorious self laid out before the views from Troy Hill. 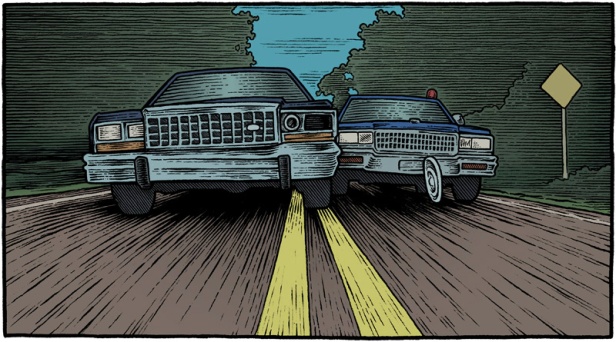 “He drives like a cop.” One of two loose hubcaps in the high-octane opening chase scene. [illustration: Mario Zucca]

As the chase jumps into high gear, Herrington makes sure everyone in the audience gets a good look at his hometown. It’s a what’s-what–or maybe where’s-where–of spectacular Pittsburgh: tight downtown alleys, the elegant Smithfield Street Bridge and Armstrong Tunnel, hairpin hillside turns, and birds-eye views from Mount Washington.

The car chase was going to be the subject of today’s story, but we just had too much to blather on about–that, and we came across a fantastic original illustration based on the movie by artist Mario Zucca (“Take Bigelow,” top). On asking Mr. Zucca for permission to include the drawing for this story, he not only granted us that favor, but produced another series of pieces from the archive done for a (one-time) planned full illustration of the film. Some of those are included here.

Zucca describes himself as “having a pretty serious obsession with [Striking Distance] back in the day,” [we believe you!] who could at one time quote the movie line-for-line. Many thanks to Mario for allowing Pittsburgh Orbit to publish his original illustrations here. Check out more of his work at mariozucca.com.

Next week: Like Capt. Nick Detillo’s old Italian saying, we’re not going to scald our tongues on another man’s soup. Enough with the appetizer–bring on the meal! The Orbit has got a fun now-and-then retracing of locations from Striking Distance that will have you tearing across bridges, hopping the hillside cobblestones, and yes, taking Bigelow. Read all about it in Part 2.

Errata: An earlier version of this story mistakenly credited local TV news personalities “Ken Burns” and “Sally Wiggins” with cameos in the film. We were corrected by alert Orbit readers that it is actually Ken Rice and Sally Wiggin who appear in Striking Distance. We regret the errors and will tar-and-feather our fact-checkers.